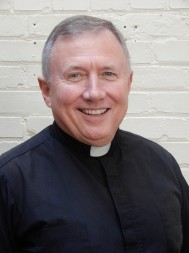 Full of joy and excitement for his ministry and vocation, Father Michael Driscoll will celebrate 40 years of priestly ordination this year.

Although he recognized early, in second grade, that perhaps God was calling him to become a priest — after his teacher, Sister Thomas Clare, BVM, spoke about vocations — Father Driscoll wasn’t ordained until he was 26 years old.

After graduating from Carroll College and studying abroad with Gonzaga University’s Florence Program, he was accepted to the local seminary for the Diocese of Helena, Mont. Father Driscoll holds a Doctor of Sacred Theology degree from the Institut Catholique in Paris and a Doctor of Philosophy degree from the University of Paris, Sorbonne.

For most his priesthood, 38 years, Father Driscoll has served in education. He has done much of that work in the Diocese of Fort Wayne-South Bend, with permission of his local Bishop.

Since 1994 he has taught liturgical and sacramental theology at the University of Notre Dame.  In 2005, he co-founded and directed the Sacred Music Program, which now offers a masters and doctorate of musical arts. Father Driscoll’s area of academic interest was liturgical, especially medieval and liturgical aesthetics, which he shared with undergraduate and graduate students through his creative and animated lectures.

Father Driscoll served as president of the Catholic Academy of Liturgy, as a liturgical consultant, and as an advisor to the Bishops’ Committee on the Liturgy, a standing committee of the United States Conference of Catholic Bishops.

This is a red-letter year professionally for Father Driscoll, as he was accepted as a professor emeritus from the University of Notre Dame after 23 years there. In January 2017, he started a transitional retirement program, which allows him to focus on writing, speaking and teaching. In his “phased-in retirement,” he will offer speaking engagements, such as the Hesburgh Lectures, discussing topics including the Eucharist, the mystery celebrated, learned and lived and Pope Francis’ ideas on mercy. Father Driscoll will also minister to his brother priests and deacons in the Diocese of Helena, offering them theological enrichment as well as relieving them periodically of their pastoral duties to allow for some rest and rejuvenation.

Lastly, Father Driscoll will complete guiding a few dissertations as well as teach part-time in the MSM and Master of Divinity graduate programs at Notre Dame. He most enjoys a course on the Eucharist that allows him to mentor seminarians and musicians taking the course. Partnering both lay musical and religious theological students, he opens the dialogue between the connection the celebration of the liturgy and the musical parts to be understood from both a theological and technical musical viewpoint. The beauty and benefits of building such relationships are helpful for the course, as well as the real-life application, which his students will encounter after graduation in their pastoral work.

This type of collaborative work and dialogue is one of the hallmarks of Father Driscoll’s ministry. A constant theme of ecumenism has existed and flourished over the course of his 40 years of priestly service. Father Driscoll reflected how in fifth grade, in Butte, Mont., he was asked to write his first long paper: three pages on any topic of his choice. As the Second Vatican Council was being convened in Rome, he chose the word “ecumenism” to write about. This set a trajectory of the topic for the rest of his life.

Travel, as it connects with his ministry, has also been a retirement delight for Father Driscoll. He hosts Travelin’ Irish trips for Notre Dame alumni, including one to the Galapagos Islands. Father Driscoll also taught a three- week course on liturgy and architecture at the Notre Dame Rome Global Gateway. Even while visiting his brother in Maui, Hawaii, he was able to serve there as well as at the parish of St. Augustine by the Sea on Oahu. Looking down the aisle of the church to the Pacific Ocean, he celebrated Mass in the manner familiar to the people of Tongo, complete with Togolese music. Father Driscoll delights in this style of practical application of his life’s academic study, where the theoretical and pastoral become one.

“It has been a great ride,” he explained smiling. He is clearly looking forward to where the Holy Spirit calls him.