More than 80 people spent five hours Feb. 8 learning how to be more convincing defenders of life. Attendees at the annual Kloska Family Life Defenders Boot Camp ranged from junior high students, who couldn’t recall having had a previous conversation about life issues, to those active in right-to-life advocacy since 1973.

Among the latter was a post-abortive woman eager to share her story with those present. She said she would have changed her mind about her abortion if only one person had questioned the decision she was told was medically necessary.

This year’s event — a tradition since 2014 — took place for the first time at Bethel University in Mishawaka. The Stroik, Kendzicky and Edmonds families sponsored scholarships for students from Marian High School, Mishawaka; Saint Joseph High School, South Bend; and Trinity School at Greenlawn, South Bend. There also was at least one mother-son pair present, along with a homeschool contingent.

One of the homeschool students, Mia Towers, said she knew abortion was wrong but hadn’t known how to explain why to someone else. Carla Martin, from St. Monica Parish, Mishawaka, pointed out that it’s easier to defend life on Facebook than in person. 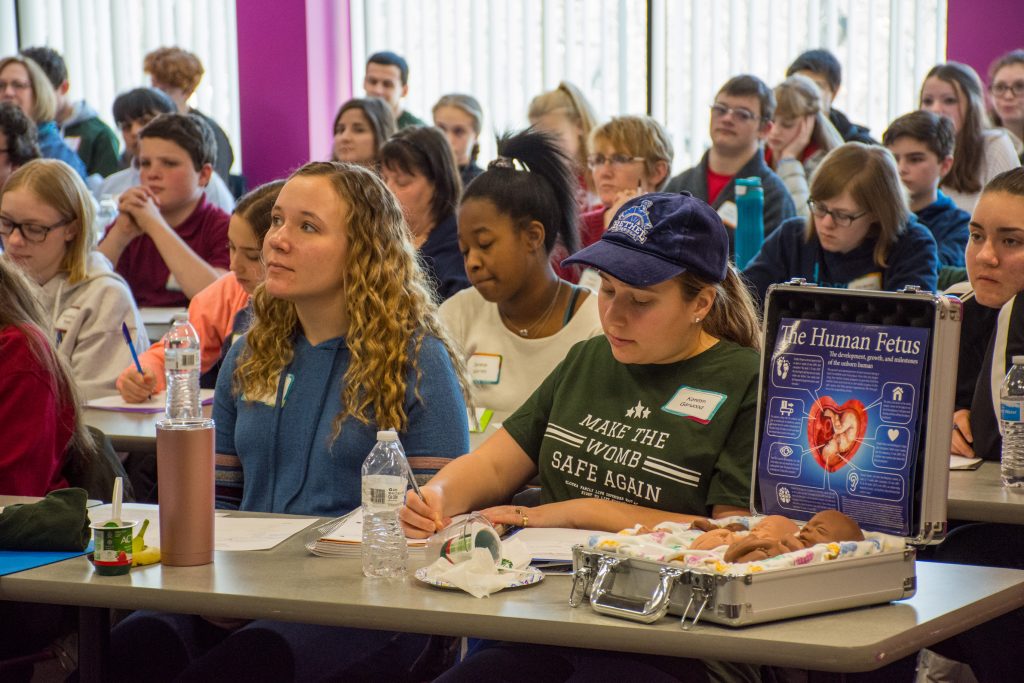 Joanne Connaughton and Andrea Kane both have witnessed outside Whole Women’s Health, an unlicensed abortion clinic on Lincolnway West in South Bend. Connaughton told about a grumpy gentleman who regularly asked the pro-life sidewalk counselors why they were harassing women: They simply told him they loved those women. His position didn’t seem to soften, but one freezing day he suggested an older pro-life witness go to the nearby dollar store and get himself a warm hat.

One day when Kane was on the sidewalk by herself, she became apprehensive as a man in a truck drove up. He asked if she was praying, and when she said yes, tears ran down his cheek. He told her he and his friends, who were constructing a new Women’s Care Center across the street, were praying as they worked, and he also asked her to pray for his post-abortive niece.

The boot camp’s presenters were from Created Equal, based in Columbus, Ohio. First-time participants attended The Case for Life 101 seminar led by Gabriel Vance, a 24-year-old father of three. Asking “What are the preborn? “ he used human embryology and philosophy to show that life begins at conception. Apart from prejudices like “ageism,” he said, the differences between the born and preborn — such as size, location, level of development and degree of dependency — don’t alter the value of human life.

Seth Drayer led The Case for Life 201 session for students who had taken the previous seminar, engaging them in dialogue about whether the value of a human life is based on who someone is or on what she can do. Both speakers modeled a respectful attitude that makes them effective, they said, in contrast to the shaming, confrontational tactics that give the pro-life movement a bad name.

“What’s good about that pro-choice argument?” asked Drayer. “In what ways is that a good analogy? Where does it break down?” 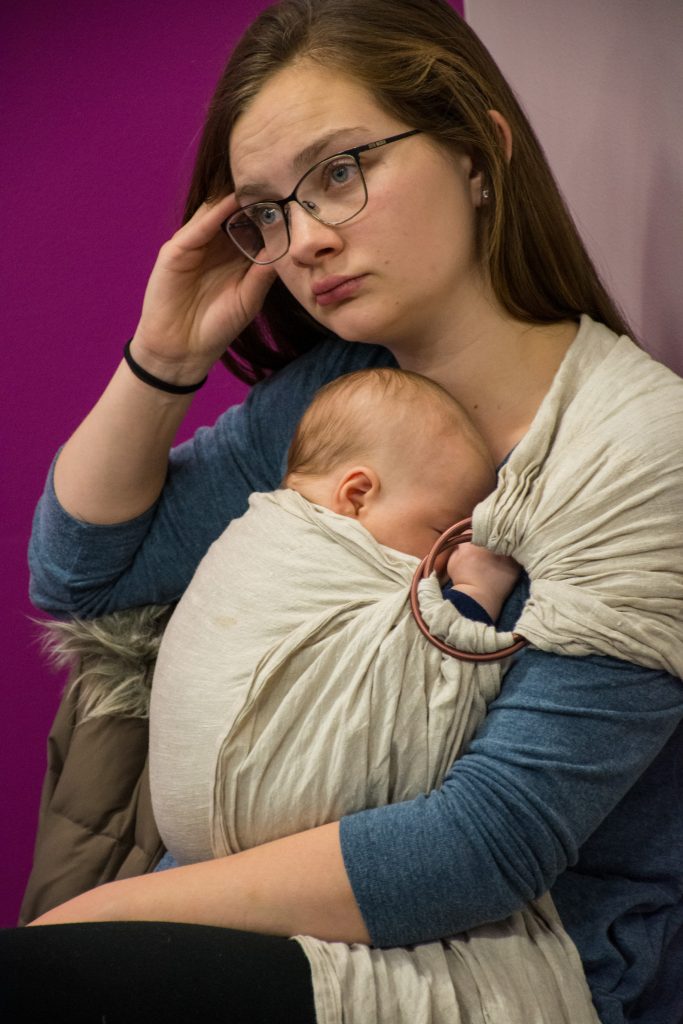 A young mother listens to a Life Defender speaker during a breakout session.

Conversation tactics shared by Vance included asking good questions, sharing stories, finding common ground and helping the other person follow his reasoning to its logical conclusion, even though that’s often a position he isn’t willing to espouse.

Drayer pointed out that the “default” position for people who identify both as pro-choice and pro-life is apathy. However, many abortion advocates are more passionate about killing babies than we are about saving them, he told the group. So how can the hearts of more people be motivated to take sacrificial action?

He pointed out that in other social movements, showing photos of the victims has been very effective. Gen. Eisenhower made his soldiers walk through a concentration camp to see what they had been fighting for, for example, and Rosa Parks was inspired to stay in her seat on the bus by remembering horrendous photos of the mutilated body of Emmett Till. Time magazine recently put on its cover the face of a young woman her relatives disfigured after she dared to protest spousal abuse.

In the same way, the images of aborted babies powerfully convey the humanity of the preborn.

The session 101 attendees broke up into pairs to role play, one arguing each side of the debate. After that exercise, Vance patiently addressed some of the hard questions that surfaced.

To those who see abortion as a necessary development stemming from women’s suffrage and feminism — despite the fact that the early suffragettes were pro-life — he exclaimed, “What a demeaning view of a woman, to think she’s not strong and capable enough to succeed after enduring a nine-month pregnancy!” An attendee also pointed out that those who exploit and traffic women often force them to abort their children.

Vance pointed out that a woman doesn’t have to choose between aborting and parenting a child; there are 2 million American families waiting to adopt. Instead of “giving up her baby,” the birth mother can “make a loving adoption plan.”

At the end of the afternoon, Created Equal said there were three spaces left on its annual Justice Ride, a bus trip to Florida over spring break that includes intensive training and opportunities to share the pro-life message on several college campuses. Right to Life Michiana offered to pay for those trips, and Vance promised, “You will see minds changed and babies saved from abortion.” Melanie Garcia of Right to Life Michiana also talked about local opportunities to witness and for education, including sidewalk counselor training at Notre Dame Feb. 29, praying and holding signs in front of Whole Women’s Health an hour a month and making presentations to eighth graders about fetal development.

Allen County Right to Life has become Right to Life of Northeast Indiana, and it also sponsors Life Defenders boot camps like the one in South Bend. One will take place in Kendallville March 14, but the premier event is a summer overnight at the University of Saint Francis, Fort Wayne, which more than 100 high school and college students from several states will attend July 10-11. Speakers from Life Training Institute in Colorado Springs, Colorado, will present the 17th annual camp, which has been “equipping Christians to defend their unborn neighbors since 2004.” Advanced Pro-Life Apologetics 301 at that event will be presented by Scott Klusendorf, author of “The Case for Life,” a must-read for people who care about the issue of abortion.

In the words of Abigail Lorenzen, operations and media director, Right to Life of Northeast Indiana, “Whether you think you know it all when it comes to pro-life apologetics, or if you’re nervous about having conversations with people about abortion, Life Defenders will be enormously beneficial. Its simple way of breaking down seemingly complex arguments to their fundamentals and pairing them with logical responses based in science and reason makes it the best training available. There’s no better way to spend your day than coming to Life Defenders and learning how to defend the innocent lives our country labels ‘disposable.’”