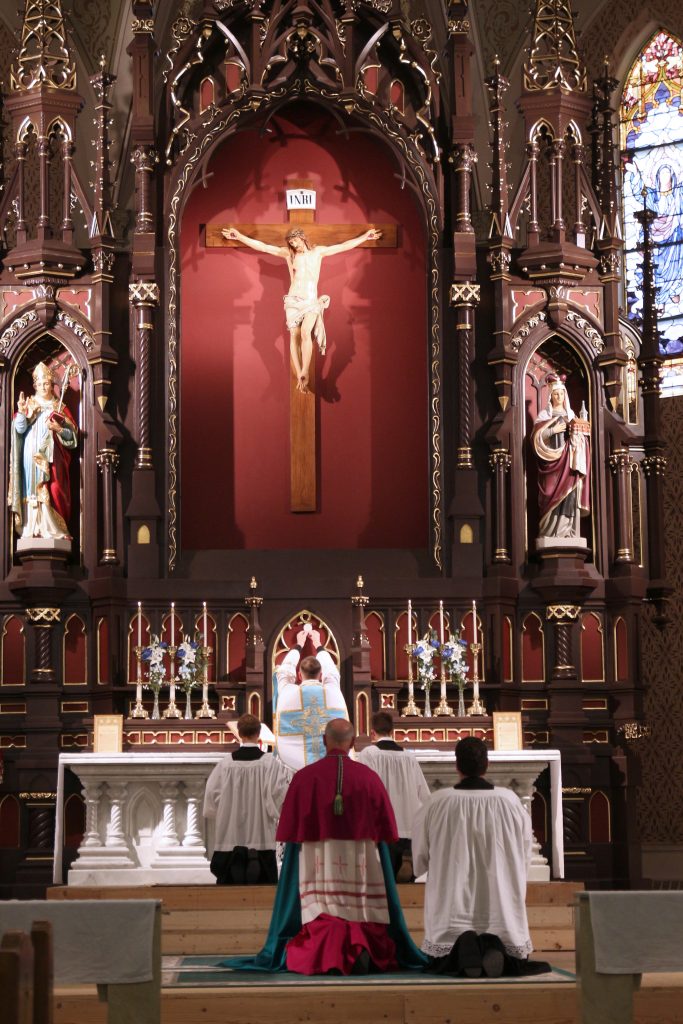 About 225 people do gather at the church every Sunday, either at the 7:30 a.m. low Mass or the 10 a.m. sung Mass. Although the congregation includes some who grew up with the “Usus Antiquior,” or “ancient usage” before the Second Vatican Council, more are large young families who find a strong sense of community here.

Pam Washburn calls the liturgy “timeless.” She recognizes a deep hunger for transcendence, truth and tradition. As Archbishop Alexander K. Sample of Portland, Oregon, put it, “This is the Mass of the ages that has nourished the faith life of generations of Catholics.” Far from there being a “rupture,” he said, the two forms of the Roman rite are “mutually enriching.”

At St. Stanislaus, the celebrant and half a dozen acolytes process in and perform elaborate ritual actions while a well-trained choir and schola sing the Mass parts. Msgr. Fritz describes the interplay between those in the choir loft and the sanctuary as an interweaving dance proceeding at different tempos. All the prayers are in Latin, and there are very few verbal responses from the congregation; but the people are “participating in the sacrifice,” according to their pastor, “just as they are supposed to do.” 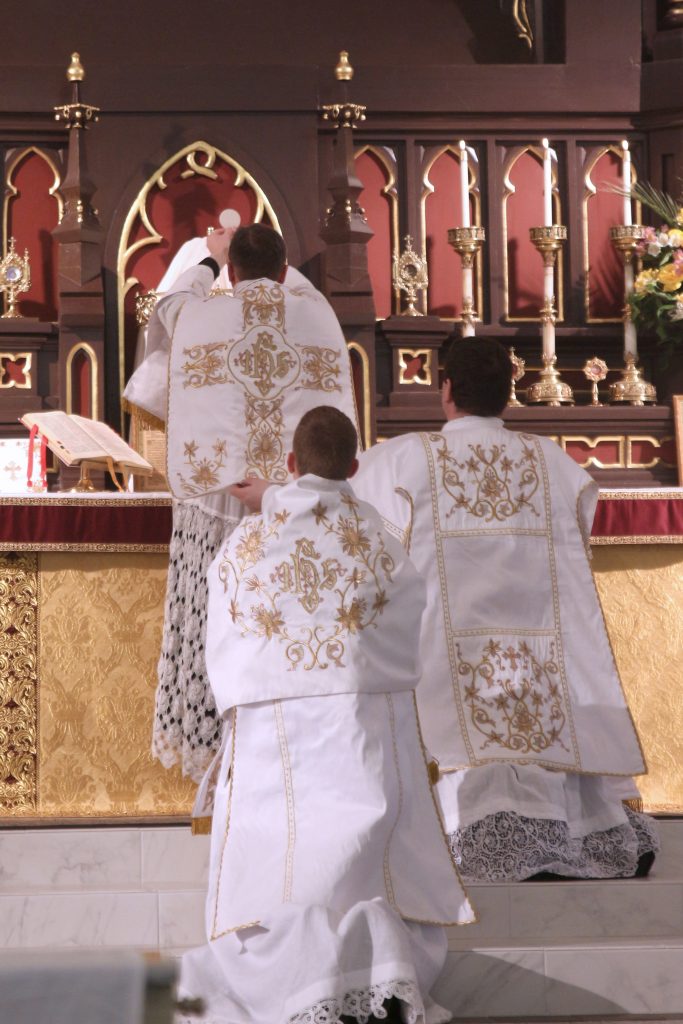 On Easter Sunday at the solemn Mass, Msgr. John Fritz, FSSP, pastor of the parish, elevates the Body of Christ after the consecration; Deacon Daniel Mould, FSSP, and Deacon Luc Poirier, FSSP, are assisting.

In fact, the Tridentine Mass is very “accommodating to anyone’s capacity.” Auditory learners are treated to fantastic singing, thanks to choir director Darlene Chabot. Visual learners can feast their eyes on ornate vestments and sacred art that differentiate the sacred space from the world around it.

Incense involves another sense. A well-illustrated missal makes it easy to follow along with the Mass, or there is space for wordless meditation or familiar, memorized prayers.

“This is also our historical and cultural heritage,” the pastor pointed out.

For the feast of Our Lady of Guadalupe, he was thrilled to have music by students in the University of Notre Dame’s graduate program in sacred music. “This music was written to be sung in a church like yours,” they told him, “not in a concert hall.” 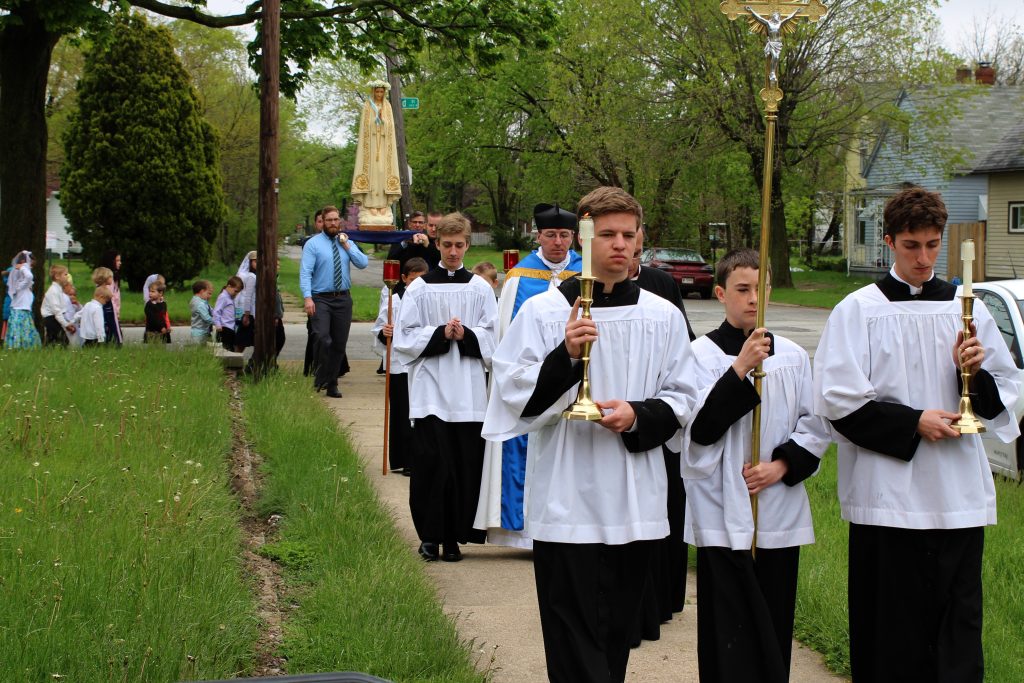 Pictured during a 2016 May crowning procession at St. Stanislaus, Bishop and Martyr Parish, are, in the foreground, at left, acolyte David Brown; crossbearer Philip Dowd; and in the foreground at right is Joseph Speybroeck. The master of ceremonies next to Msgr. John Fritz, FSSP, is Ben Speybroeck.

There are striking differences from the “Novus Ordo,” or current way to celebrate Mass — the way to which most Catholics are accustomed. For instance, most women prefer to cover their heads. There are only two Scripture readings, proclaimed first in Latin and then in the Douay-Rheims English translation, with words like “sayeth,” “froward” and “Holy Ghost.” The Sunday Scriptures constitute a one-year cycle, rather than three.

If there is no saint being celebrated at a weekday Mass, the celebrant repeats the Sunday reading. He faces the altar, rather than the congregation, during most of Mass. Communicants kneel at the altar rail to receive the host on their tongues, and it is the priest who says “Amen,”

Previously a priest of the diocese of Rockford, Illinois, Msgr. Fritz was thrilled to discover the power and beauty of the Latin Mass. “I feel part of the continuous river of the history of salvation. Just think: I am praying the exact same words and using the same gestures as St. John Vianney. This is a privilege, an honor, a comfort, a stability you don’t feel elsewhere.”

Accepted into the Priestly Fraternity of St. Peter, Msgr. Fritz learned the old and new rites “on the job.” He has been at St. Stanislaus for 2 1/2 years, previously traveling from Fort Wayne (where the Latin Mass is offered at Sacred Heart Parish) to celebrate the extraordinary form of the Mass hosted by St. Patrick Church in South Bend. Traveling west from South Bend, one has to go to Chicago to find another parish regularly offering this form of the Mass. 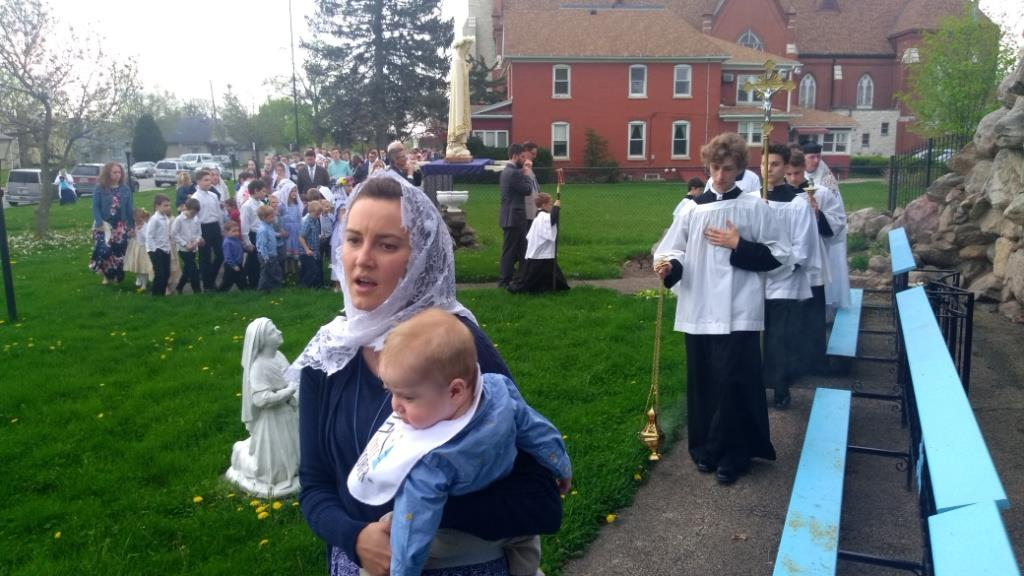 Katie Schwartzers holds her son, Matthias, during this year’s May crowning at the parish.

Many of the large families who belong to St. Stanislaus homeschool their children. A homeschooling cooperative meets at the parish one day a week, where the pastor leads them in prayer and religious education, relying on the Baltimore Catechism. During the summer, families gather for “rosary and recess,” sometimes welcoming children from the westside neighborhood. Twenty-five women belong to a sodality that meets monthly, and there is also a Holy League of Prayer for men. Little Flowers and a Troop of St. George provide Scouting-type activities for girls and boys, respectively. Volunteers also coordinate special events like the May crowning and annual parish picnic.

Ryan and Susan Greutman, who recently welcomed their seventh child, were married in the Ruthenian Byzantine rite. The Latin Mass provides a similar “mini-retreat,” as Susan puts it, “a glimpse of heaven, a chance to step away from the worldly craziness of modern life.” St. Stanislaus is also a supportive community, where no one looks askance at a stay-at-home mother of many.

Because parishioners gather for a potluck brunch after Sunday high Mass, many families spend most of the day together. Like his mother, John Greutman, 13, says his closest friends all attend St. Stanislaus.

The church and rectory have required renovation, both to adapt the space to this form of the liturgy and to overcome years of delayed maintenance. Parishioners are extremely generous in pitching in to do the necessary work. It is a nonterritorial parish, meaning that its members come from across the diocese and beyond, instead of from the immediate neighborhood, because of the unusual permission to celebrate the Latin Mass: So everyone who becomes a member makes a deliberate decision to do so, and they are eager to take advantage of everything the parish offers.

“I am so pleased with the ‘personality’ of this parish,” said Msgr. Fritz. “We’ve got a good thing going, thanks to the intercession of St. Stanislaus, Bishop and Martyr.”