TRENTON, N.J. (CNS) — The late Father Gerard S. Sloyan was “ever the teacher and pastor” whose commitment to students “was unstinting,” said one of the organizers of a recent symposium held at The Catholic University of Washington to honor the legacy of the Trenton diocesan priest.

Father Sloyan, who died in the early morning hours of Feb. 23 at age 100, was a Scripture scholar, professor and a leading popular writer on the Second Vatican Council’s liturgical renewal in the 1960s and ‘70s. 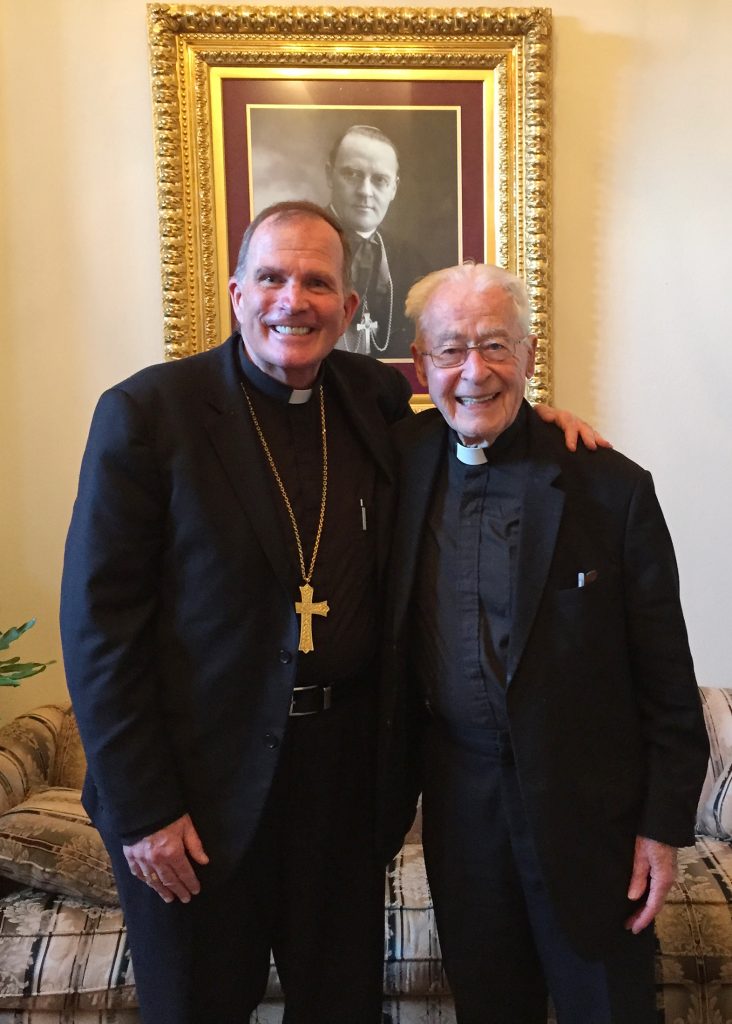 Father Gerard Sloyan poses for a photo with Bishop David M. O’Connell of Trenton, N.J., in this 2019 file photo. Father Sloyan, who was the Diocese of Trenton’s oldest priest and longest ordained, died Feb. 23, 2020, at age 100. (CNS photo/courtesy The Monitor)

He was a true “polymath” of the post-conciliar Church, as one of the presenters at the March 4 symposium, professor Philip Cunningham of St. Joseph’s University in Philadelphia described him, according to Ian Boxall, one of the organizers of the Sloyan symposium, who is an associate professor of New Testament in Catholic University’s School of Theology and Religious Studies.

“He was key to promoting theological education for religious and laypeople in CUA’s Department of Religious Education,” he added. “Our symposium at CUA was able to touch on just some of Father Sloyan’s many interests.”

At the time of his death, Father Sloyan was the Diocese of Trenton’s oldest priest and had been ordained the longest.

He celebrated dual milestones in 2019 — his 75th anniversary of priestly ordination June 3 and his 100th birthday Dec. 9. For many years Father Sloyan lived in an assisted living facility located on the grounds of Our Lady of Mercy Parish in Potomac, Maryland, in the Archdiocese of Washington.

Born in 1919 in the New York borough of the Bronx and raised in Red Bank, New Jersey, Father Sloyan spent the majority of his 75 years of priestly ministry serving in academia.

He prepared for the priesthood at Seton Hall University in South Orange, New Jersey; Immaculate Conception Seminary in Darlington, New Jersey; and Theological College of The Catholic University of America. He was ordained a priest by Bishop William A. Griffin June 3, 1944, in St. Mary of the Assumption Cathedral in Trenton.

After several other pastoral assignments in the Trenton Diocese and a brief time in the novitiate of the Brothers of the Sacred Heart in Metuchen, New Jersey, Father Sloyan in 1955 served briefly as assistant dean of the College of Arts and Science at Catholic University.

In 1957 he became head of the graduate department of religious education, a position he held for a decade before he resigned and joined the Department of Religion at Temple University, Philadelphia, where he remained until his retirement. Once he retired, he returned to Washington as an adjunct professor of theology at Catholic University and at Georgetown University, also in Washington.

Throughout his years in academics, Father Sloyan published numerous books on the Catholic faith, focusing primarily on the life of Jesus and the Gospels. Among his popular works are “What Are They Saying About John?” in 1991; “Jesus on Trial: A Study of the Gospels” in 2006; and “Jesus: Word Made Flesh” in 2008. He also served on the continuing education committee of the Trenton diocesan priests’ council.

In an interview by The Monitor, Trenton’s diocesan newspaper, for a story on his 75th anniversary of his priestly ordination, Father Sloyan reflected on his special milestones in 2019.

He recalled knowing from the time he was 6 and serving as an altar boy in his parish that he would one day want to become a priest. He credited his parents, Marie Virginia Kelley and Jerome James Sloyan, for raising him and his three sisters in a strong Catholic household and instilling them the belief in God.

“To me, faith is all important,” Father Sloyan said in the interview.

“Faith is at the roots of my human being from infancy up,” he said, and noted that his Catholic upbringing was influential in his wanting to become a priest and that two of his sisters also entered religious life.

A description of the priest in materials prepared for the symposium said of him: “Father Sloyan, who was instrumental in articulating an American response to the Second Vatican Council at Catholic University and beyond, remained a guiding light for many in education, pastoral studies, and church life over the course of his long career.”

Many of his former students came to Washington to attend the symposium.

Boxall told CNS: “Father Sloyan’s impressive list of publications bears testimony to the breadth of his interests, his capacity to make connections between disciplines, and his concern to ensure that scholarship remained firmly in the service of the Church, especially through pastoral ministry and preaching.

He added: “Aware that some of his ground-breaking ideas were controversial at the time” — including his support for women’s ordination and his argument that bishops should be locally elected — “Father Sloyan’s approach is well summed up in his 1950 book on Catholic education: ‘Should it sting, remember the ancient difficulty of making an omelet without breaking a few eggs.’”