Parishioners of St. Patrick, Ligonier, spoke sincerely about their own practices of the Catholic faith, as well as that of others, when they gathered on March 8 in the lower level of the parish to discuss the questions posed by the Synod on Synodality. Together with members of other parishes of the Elkhart vicariate, they considered at length how they might better walk with others toward Christ: They concluded that it begins with deepening their own love of the Lord and respect for His commandments.

Following a bilingual Mass celebrated by pastor Father Wilson Corzo and assisted by Deacon Stan LeMieux, the Thursday-evening worshippers settled in at tables separated by the language that the participants felt most comfortable speaking. Father Corzo’s homily had emphasized the compositional themes of forgiveness, love and humility found in the Our Father – the way Jesus taught His followers to pray – and the three qualities informed the ensuing conversations in both English and Spanish. 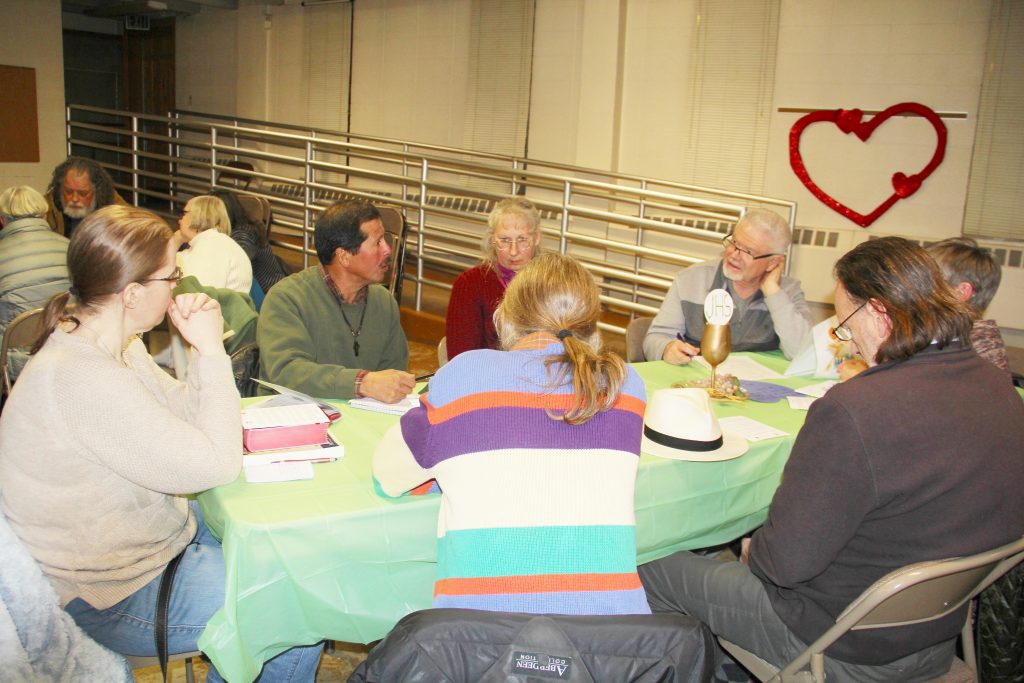 Jodi Marlin
Members of Vicariate C meet at St. Patrick Parish in Ligonier to discuss the questions put forth for the Synod on Synodality in which Pope Francis called for input from people at all levels of Church life. This was the last of the synod listening sessions scheduled for the diocese and many participants came from parishes in the surrounding area to bring their unique perspectives to the table.

Lety Lopez felt that Journeying Together, the theme of the Synod on Synodality and the topic of the first question of the night, required a deeper commitment on the part of every Catholic to first be faithful to the Gospel, so that they could spread it and invite others to know Christ.

“We don’t listen to the Lord. We focus on ourselves and what we want, how we want things. We need to learn to listen and listen with humility so we can then meet people where they are and announce the Gospel,” she said. “Usually, we do what’s most convenient for us, instead of listening to the Holy Spirit.”

Everyone has a tendency to ask for what they want in prayer instead of asking what God’s will is for them and for those around them, agreed Brenda Segovia. “But we pray, ‘May Your will be done.’ We should want to be done whatever God wants done.”

Marisol Alba then recalled the Greatest Commandment: to love one another. “That’s what we lack – love for one another. We have to have that to walk with our neighbor. We have to walk even with that person that we can’t stand, with our enemies. We have to ask ourselves, how are we helping our faith community grow closer to Christ? Because of our baptism, it’s our obligation to go out and take the Word of God to others.” 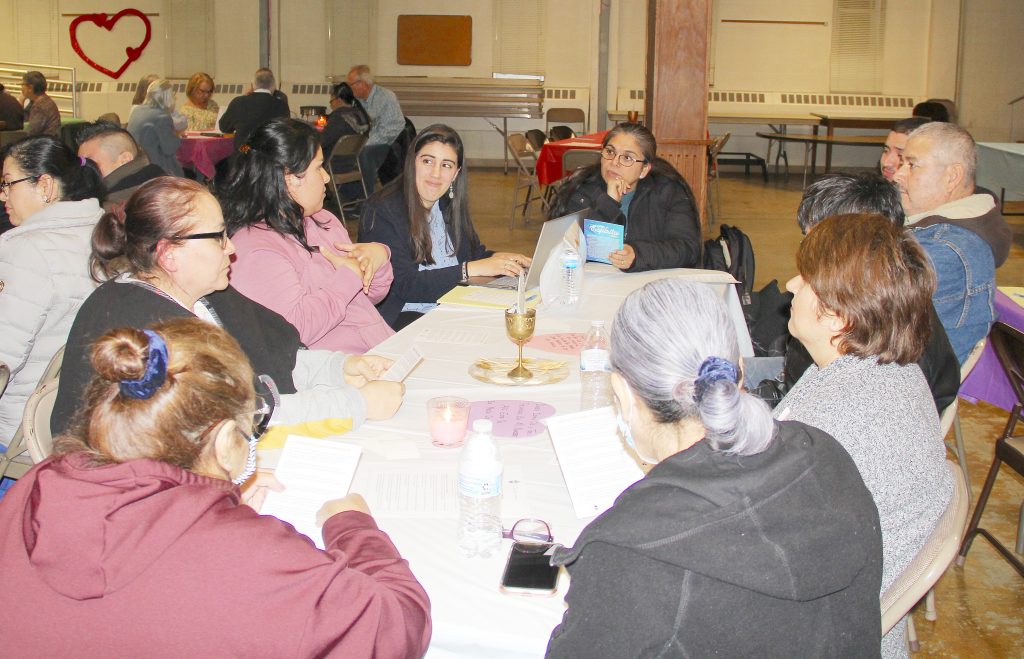 By calling the Synod on Synodality, to whom else is Pope Francis asking Catholics to reach out and care for? “A muchos,” said Lopez, including unborn children, drug addicts and teens. “And to those who are imprisoned, whether justly or unjustly,” added Margarita Casteñeda.

One person at each table took notes on the responses of the others to the seven questions put before them as part of the synodal process. Those notes will be presented to Bishop Kevin C. Rhoades and their themes carried by him to the Vatican when the bishops meet with Pope Francis next year at the Synod of Bishops.

Question four provoked perhaps the greatest personal reflection of the night: “How are the baptized called to participate in the mission of the Church, and what areas of that mission are we not fulfilling?”

There are many areas where we fall short, answered Lopez, and these became more numerous during the pandemic. “Sadly, we don’t get together like we did before, even. The times that 10 or 12 people would have gotten together for something, maybe a Bible study, now there are two or three.”

Segovia said she has observed that it’s a habit of many families to piecemeal the practice of the faith: Mom takes the children to church but Dad won’t come with them, or one parent takes a child to religious education classes but the other parent or the other children don’t come. Lopez concurred.

“I look at other denominations and see how they all come together and participate in church – children and adults, young people, everyone – and I wonder, why not us?”

The fault lies with selfishness within marriage, several participants agreed. Segovia added solemnly that young people are losing their faith because “we sometimes fall down on the job of catechizing them, as well as modeling the faith. A marriage has to be united in Christ for the spiritual wellbeing of the children.”

The need for themselves and all Catholics to practice the faith publicly and without shame resonated across several discussion questions, including those about interdenominational relations and the holiness of the Eucharist.

One of the most effective ways to share the faith with others is to do so not with words but with actions, said Lopez. She cited several reasons, among them the preparedness of some non-Catholic Christians to challenge Catholic beliefs and practices.

“They argue with you,” said Lopez. “It’s difficult to have a relationship with them because they’re always challenging your beliefs.”

As an example of the kind of shamelessness with which Catholics should demonstrate their beliefs, Alba mentioned the practices of faithful Muslims. “The hour of prayer comes around and they’re rolling out their mats, taking off their shoes and getting on their knees. They don’t care who sees them, they’re more concerned about being faithful to their beliefs. Why are we ashamed to even do the Sign of the Cross in public? It says in the Bible to love your God before all else. It’s not our will, but His that should be done. We’re not supposed to be ashamed of Him. So, when our faith is tested, we fail. We don’t testify to what we are and to whom we belong.”

“We love Him, but we love ourselves more,” added Janet Martinez. “We think we have so much faith, but we don’t have a complete faith, whether because of fear, laziness or self-centeredness.”

Several parishes of Vicariate C were represented at the March 8 synodal gathering, including St. Martin de Porres in Syracuse, St. Mary of the Annunciation in Bristol and St. John the Evangelist in Goshen. The friendly conversations about faith and reflections on areas of spiritual laxity functioned as both fellowship and a call to renew participants’ desire to more consistently and publicly practice their faith.

“It’s making me feel like I want to do things better myself, and improve how I evangelize – with love, not with any criticism or judgment,” said Lopez.