WASHINGTON (CNS) — In the 40 years since the U.S. bishops approved their “Pastoral Statement of U.S. Catholic Bishops on Persons With Disabilities” in 1978, the landscape for persons with disabilities has changed both within the Church and within society, and largely for the better.

“Some things have changed in the 40 years. If anything, disability is seen as part of a normal life. It’s ordinary, not exceptional,” said Jan Benton, executive director of the National Catholic Partnership on Disability, who has been part of the organization since its founding in 1982.

Disability, she noted, is “part of the living process. People are born with disabilities, or have an accident, and (there’s) aging. With the design (accommodations) and the ADA (Americans With Disabilities Act) and all, people recognize that it’s a part of life and not unusual.”

That makes the bishops’ statement “still as relevant and important as when it was issued in 1978,” she said.

“Our role was to get it implemented around the country. Pastoral workers and families were pushing for it,” Benton told Catholic News Service in an Oct. 31 telephone interview. 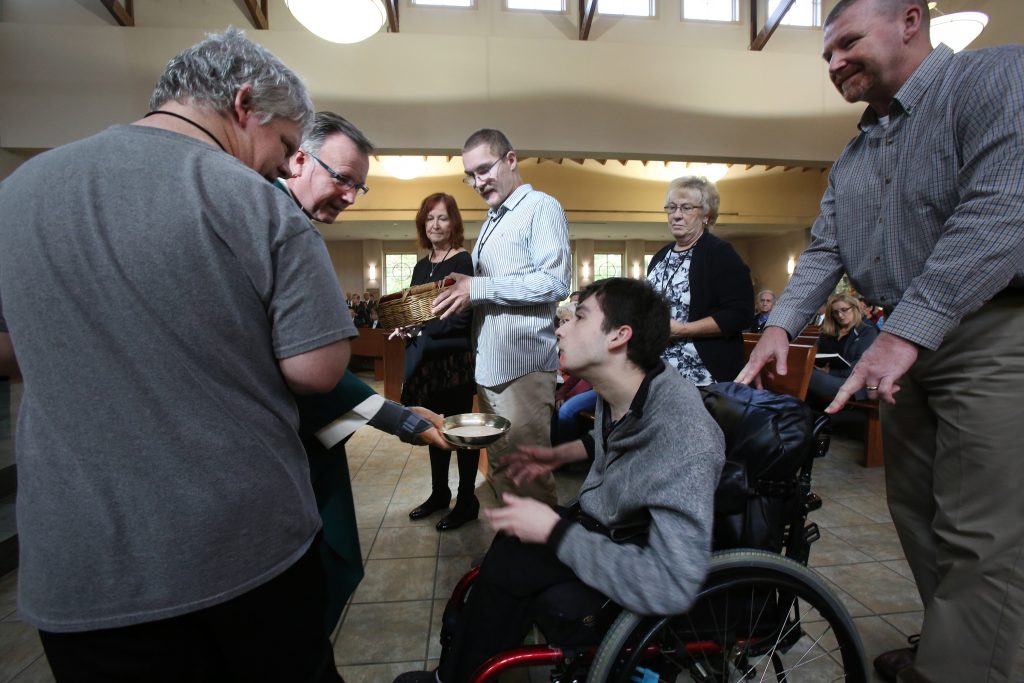 Persons with disabilities “have a life within the Church and they were very important to the Church,” she added. “Way back then, the bishops were saying things that they’re saying now, that everyone has gifts to bring to the Church community. The community is lacking if people are missing. My favorite quote is, ‘There can be no separate Church for people with disabilities.’”

The ADA played an important role in furthering the bishops’ statement, Benton said: “We influenced the ADA, but the ADA built a consciousness in people: ‘Well, if I can go to a restaurant and go shopping, then I should be able to worship in my faith community.’”

Today, there is “even more emphasis on the giftedness that people bring to the table. … Everybody needs the grace of the sacraments. There’s even less of an emphasis on inclusion and a recognition of belonging,” Benton told CNS. “You hear the word ‘belonging’ a lot in secular and Catholic circles,” she added, because Catholics with disabilities belong “by virtue of their baptism. If you believe that, then you think differently in how you minister, how you set things up in the Church.”

Benton said, “There’s more an emphasis on relationship than there is on programming. When people come to church, they want to be appreciated for who they are, and make friends.”

One change is apparent even with the document itself. When first issued, it was titled “Pastoral Statement of U.S. Catholic Bishops on Handicapped Persons,” and the word “handicapped” was used again in 1988 in a 10th-anniversary reflection by the bishops on the original text.

Benton said Loyola Press is now in the sixth year of presenting an award to parishes that have exemplary practices for those with disabilities, with past awards going to parishes in the Archdioceses of Atlanta, Dallas, Philadelphia, Washington and the Diocese of Bismarck, North Dakota.

However, a parish need not win an award to make all of its members feel included.

At the twice-yearly “Special Needs Mass” at Jesus the Divine Word Parish in Huntingtown, Maryland, in the Archdiocese of Washington, “we try to highlight the gifts of our special needs community. We invite them to be involved in whatever ministry they would like. They respond well,” said Father John Dakes, the pastor. “We try to make sure they (liturgical ministers) are all from the special needs community.”

The parish also has an “Everyone Belongs” ministry to foster inclusiveness in parish life, he added. Faith formation for those with special needs also is offered.

Father Dakes told CNS the effort has started slowly. “Families feel constrained by pressure or something to keep their kids at home. They don’t want to cause distraction, they don’t want to cause tension,” he said. But it won’t deter him because “anything worthwhile is worth continuing doing,” the priest added. “I’ve been involved in this ministry in four parishes, three of which I’ve begun myself. In each it’s taken off,” including one that became its own nonprofit organization.

In Redford Township, Michigan, which hugs Detroit’s northwest border, the former grade school at Our Lady of Loretto Church has become the home for the West Detroit Catholic Deaf community, which sponsors a weekly Mass with a deaf priest celebrating most Sundays.

“I can actually speak fairly well and sign, so I can communicate with people with my voice and read lips. I can’t actually hear them speaking. So, I’m kind of like the liaison between the deaf world and the hearing world.”

Kulpa said their usual priest, Oblate Father Michael Depcik, heads to a northeast suburb, Roseville, to celebrate a second Mass for deaf Catholics nearby. That Mass is live-streamed to allow those who cannot attend in person to still participate.

“My goal, if it’s at all possible, is maybe suggest something for Pope Francis, to suggest for the cardinals that they go ahead and encourage the members so they watch the deaf Mass that we are providing. Then after they watch, they can get Communion,” Kulpa said. “It makes things so much easier and meaningful.”