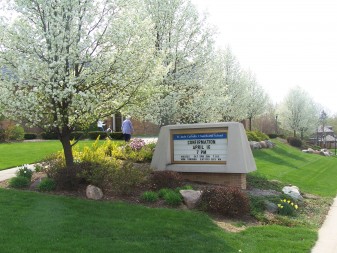 St. Jude’s Garden Club in Fort Wayne is a volunteer parish organization that maintains the grounds at the parish.

FORT WAYNE — Parishes throughout the Diocese of Fort Wayne-South Bend are blooming with color this time of year. While passersby may notice the flowers, most don’t give much thought to the work involved in keeping parish grounds looking beautiful. Groundskeeping is a job that often requires long hours of hard work with little recognition. But, just like the gardens themselves, the job pays off in the beauty and joy it helps create.

At St. Jude Parish in Fort Wayne, the groundskeeping job belongs to Jodi Deiser, a busy mother of three who also helps run St. Jude’s Scrip for Tuition program and works part-time outside of the home. She says her love of gardening comes from her grandmother who made Deiser pull weeds as punishment.

She explains that it was her habit of pulling weeds that helped her “stumble” into the groundskeeping position. While her daughter was at cheerleading practice at St. Jude School, Deiser would walk the grounds with her baby boy in a stroller. As she passed the flower beds, she noticed tall weeds growing and eventually started weeding the beds. When someone in the office noticed, Deiser quickly asked if it was okay to pull the weeds. “Have at it!” was the response, and before she knew it, she was in charge of caring for the gardens.

Now her daughter attends Butler University, her baby boy is in the fourth grade, and Deiser is still caring for the gardens at St. Jude as she heads up the Garden Club, an “informal” group of dedicated parishioners who quietly plan and care for the grounds.
As Deiser says, they don’t really have an official organization, “we just do it.” The Garden Club includes Jim Forsythe, a horticulturist at Canterbury Green; Brian Wiegman, an area landscaper; and tireless volunteer Carol Blauvelt.

The team, who has been together for seven years, usually meets in February to plan what is required for the upcoming season, while walking the grounds discussing what various garden beds need. The Garden Club has given each bed a name, usually in honor of a teacher or parish personnel who have offices nearby. One of Deiser’s favorites is the Drive-Thru Bed, which earned its name after someone in a hurry to get out of the parking lot drove right through it.

Of course, parish pastor Father Tom Shoemaker has a say in the efforts; but overall, the grounds are left to the Garden Club.
Deiser says most of their big projects are completed, but there is always talk of adding something new. The four-team members do most of the work themselves with lots of help from family. They also ask for volunteers from the parish to help with big projects, such as spreading 25 to 28 yards of mulch needed each spring.

Deiser is proud of the fact that St. Jude’s Garden Club is totally self-supporting, requiring no funds from the parish. The group received money each year from Verizon through a program that donates funds for employees’ volunteer hours. Both Carol Blauvelt and Deiser’s husband Jeff are Verizon employees. The group used the funds thoughtfully and conservatively, always keeping a bit for next year. But, as the economy has changed, the donated funds may be cut. While the money is there to cover this year’s costs, Deiser isn’t sure where they will get money for next year. But she is confident that “God will provide.”

Optimism and humility are qualities that quickly become apparent when talking to Deiser. She is hesitant to take praise for her efforts and quick to point out the contributions and hard work of others.

“I’ve been the organizer and motivator, but all the credit goes to the team. There’s a lot of stuff that wouldn’t have gotten done if they didn’t just pitch in and do it,” she says.

Deiser also talks a lot about what the seemingly thankless job has given her. “Gardening is very therapeutic for me,” she says. “Getting my hands in the dirt gives me time to reflect and relax my mind. Plus, it gives me the opportunity to give back to my parish. It’s a real labor of love.”

When asked how she and her team keep up with the grounds with such busy schedules, she laughs and says she isn’t sure, “but somehow those weeds just get pulled!”

She claims that she would step aside and let someone else take over if they were interested, but says she will always “stop and pull weeds while I’m walking. Old habits die hard.”