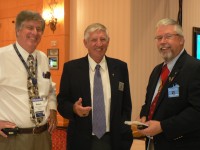 Indiana Knights of Columbus representatives Robert Hartenstein, Norman Stoffel and Stephen Ziemba were some of the Hoosier attendees at the Aug. 4-6 convention in Phoenix, which drew thousands of Knights from across the globe.

PHOENIX (CNS) — The Knights of Columbus passed a number of resolutions touching on right-to-life issues, marriage, violence and pornography, among others, during the final business session of the fraternal organization’s 127th supreme convention.

The session — closed to nondelegates — rounded out the Aug. 4-6 convention, which drew thousands of Knights from across the globe to Phoenix.
The life resolution cited a personal appeal from Pope Benedict XVI calling on the Knights to “defend the moral truths necessary for a free and humane society, including the fundamental right to life of every human being.”
It expressed grave concerns that proposed health care legislation in Congress would “accomplish by stealth many of the aims of the so-called Freedom of Choice Act, including federal funding of abortions for the first time since adoption of the Hyde amendment in 1976.”

The amendment prevents Medicaid from spending federal money on most abortions.

The resolution also listed attacks on the culture of life around the world, including a measure to legalize assisted suicide that will soon be debated by the Canadian Parliament; more widespread embryonic stem-cell research; and governmental and nongovernmental agencies attempting to force abortion on demand on countries such as Mexico, Poland and the Philippines.

To combat these growing pressures, the Knights reaffirmed their “unconditional support for the right to life and full protection in law for every human being from conception to natural death.”

They also resolved to oppose any effort to repeal the Hyde amendment and any health care reform legislation that does not “explicitly exclude abortion coverage for any health insurance plan, public or private.”

The Knights also called on legislators everywhere to pass laws protecting the conscience rights of doctors and other health care workers, and reaffirmed their policy of not inviting to any event public figures who support legal abortion.
Calling marriage a “natural institution based on ancient human values that are deeply rooted in our social, legal and religious institutions,” the Knights pledged to support bishops across the world in promoting the Catholic understanding of marriage as the “lifelong union of one man and one woman.” They also promised to work to achieve legal and constitutional protection for the traditional definition of marriage.

Another resolution expressed concern about the prevalence of “sexually explicit, violent and profane materials” in modern society, but especially on the Internet, claiming that as much as 35 percent of all Web content is pornographic.
“The costs to society are enormous, and include infidelity, broken marriages, both direct and indirect harm to children and a general breakdown of moral standards of every sort,” the resolution stated.

To combat these ills, the fraternal organization called upon law enforcement officials to investigate and prosecute criminal conduct in this area, especially child pornography, and they encouraged parents to foster a “wholesome atmosphere and open communication on sexual matters within the family.”

They recognized the great gift of a Catholic education and pledged their support for legislation providing for parental choice in education through tax credits, vouchers and scholarships.

They called upon people everywhere to volunteer their time to “programs and projects that benefit the needy,” reaffirmed their dedication to patriotism and love of country, and promised the renewal of their devotion to Marian prayer and the rosary “as a way to strengthen the family and to spread the Gospel of life.”

Following the conclusion of the business session, the Knights began their first International Marian Congress dedicated to Our Lady of Guadalupe.

The congress was to feature lectures, films and art about the apparition of Mary to St. Juan Diego in Mexico in 1531, and will conclude with an Aug. 8 festival at Glendale’s Jobing.com arena, where officials expect an attendance of more than 17,000.

Robert Hartenstein, from the Indiana Knights, contributed to this story.