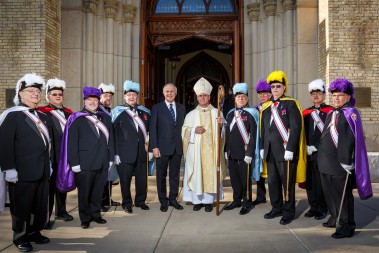 NOTRE DAME — The Knights of Columbus became the fifth recipients of the annual University of Notre Dame Evangelium Vitae Medal at a banquet on the university campus Sunday evening, April 26.

The medal has been awarded annually since 2011 by the Notre Dame Center for Ethics and Culture to honor individuals or organizations for outstanding work affirming and defending the sanctity of all human life. It is named for St. Pope John Paul II’s 1995 encyclical “The Gospel of Life” and the honor carries a $10,000 prize.

The medal was presented to Carl Anderson, Supreme Knight of the Knights of Columbus, by Carter Snead, a professor in the Notre Dame School of Law and director of the Center for Ethics and Culture. In his comments before the presentation, Snead praised the Knights for their “heroic and tireless efforts” in responding to St. Pope John Paul’s call to affirm a culture of life and to protect the most vulnerable members of society.

Snead cited some of the contributions of the Knights, including tens of millions of dollars and volunteer hours donated to worthy causes and ongoing support for various pro-life initiatives.

Carl Anderson, Supreme Knight since 2000, accepted the award on behalf of the Knights of Columbus and announced that the $10,000 prize was being donated to the Notre Dame Charles E. Rice Fellowship Fund, named for the late law professor Anderson described as a good friend and “tireless advocate for life.”

Anderson spoke about the challenges to a culture of life in the United States, and cited President Barack Obama’s speech at the 2009 Notre Dame graduation. In that speech, the president said that a way to find common ground on the abortion issue was “to honor the conscience of those who disagree with abortion and draft a sensible conscience clause” for the Health and Human Services mandate implementing the Patient Protection and Affordable Care Act (commonly called “Obamacare”).

“Six years later, that goal has still not been achieved,” Anderson said, going on to innumerate the various revisions to the mandate requiring employers to provide insurance for contraceptives and drugs that can be abortifacient.

“The history of the HHS mandate shows an administration grudgingly walking back its proposal only by the smallest steps and only when ultimately forced to do so by judicial action,” Anderson said, “and in the end, not really walking it back at all.”

The Obama administration has been “stubbornly intransigent,” even after discussions with Catholic bishops, cardinals and the Vatican Secretary of State, he continued.

“During a time when the search for common ground and consensus received heightened rhetoric in Washington, the (Affordable Care) Act itself has become an example of the way in which Washington is becoming less democratic and less capable of consensus,” Anderson said.

The message of the HHS mandate is that “Catholic institutions remain free to fashion their own identity as long as that identity conforms to the dictates of government,” he explained. And this adds to concern over the potential for government control of the U.S. economy through “HHS mandate-style regulation that goes far beyond what we may have imagined a few years ago.”

Anderson said the HHS mandate “rests upon the myth that women’s social and economic equality” depend upon reproductive services “imposed, if necessary, by government.” In reality, he continued, “the mandate is not necessary to protect women’s rights” and is merely “cover” to “further secure the emancipation of men from the responsibilities of fatherhood.”

The Knights’ leader concluded by calling for “bold action,” saying, “It is time for Catholics to take up a new evangelization of American freedom,” for Catholic institutions must be allowed to fulfill their mission of treating each human person with dignity.

The free exercise of religion must be preserved, he stressed, for “the autonomy of our religious institutions is not extrinsic to the missionary nature of Christianity; rather it is essential to it.”

Bishop Kevin C. Rhoades of the Diocese of Fort Wayne-South Bend celebrated a special 5 p.m. Mass in Sacred Heart Basilica before the award dinner. In his homily, he noted that it was appropriate to celebrate the Evangelium Vitae Mass during the season of Easter, for the season is about life and the victory of the Risen Christ over death.

The readings for the Fourth Sunday of Easter “are a proclamation of life,” he observed, and he focused on the Gospel of the Good Shepherd, who not only defends His sheep, but is willing to lay down His life for them.

“In the world today, there are wolves who seek to devour the sheep,” the bishop continued. “There are those who sow hatred, malice, doubt and confusion. They destroy human life. They attack it in the womb. In the name of a false mercy, they attack it at its end. All this happens here in our beloved nation.

“And then in the world, there are the wolves who seek to devour the sheep simply because they profess the name of Jesus or because they are of another religion.”

Bishop Rhoades said that “the culture of death seems to be expanding every year,” and St. Pope John Paul II, “ever the good shepherd,” addressed this fact by urging the building of a new culture of life.

The Knights of Columbus, he continued, heeded that call, and their leader, Carl Anderson, “has been a good shepherd in leading the Knights in service of the Gospel of Life.” Further, he said, the Knights have been “exemplary” in heeding St. Pope John Paul’s call to support and promote human life through the service of charity.

“They bear witness to the sanctity of life through volunteer works of charity, education, advocacy, and prayer” and “are untiring in their service of the Gospel of Life. They are loyal sons of the Church, ever ready to support the Church and our bishops in working to build a new culture of life.”

Bishop Rhoades reminded the congregation that every Christian also is called to be a good shepherd by practicing the Works of Mercy and by evangelizing those who do not belong to the sheepfold of the Church.

“As St. John Paul II wrote: ‘Only respect for life can be the foundation and guarantee of the most precious and essential goods of society, such as democracy and peace,’” Bishop Rhoades concluded.