How often does a person say that he or she cannot make a difference in the world – that they are too small, too poor, too far away from the problems of extreme poverty to be of any help? Sometimes the problems of this world feel too big and overwhelming, causing people to give up before they even begin to try. Dan Blacketor, Founding Director of The Rhema Project, refused to let the size and location of a major crisis stop him from taking steps to aid orphaned and unwanted girls in India, a call that God placed on his heart through visits to that country. Through the efforts of his friend, Dan LaFree, members of the Knights of Columbus Council 4263 at St. Pius X in Granger no longer feel as helpless, either. 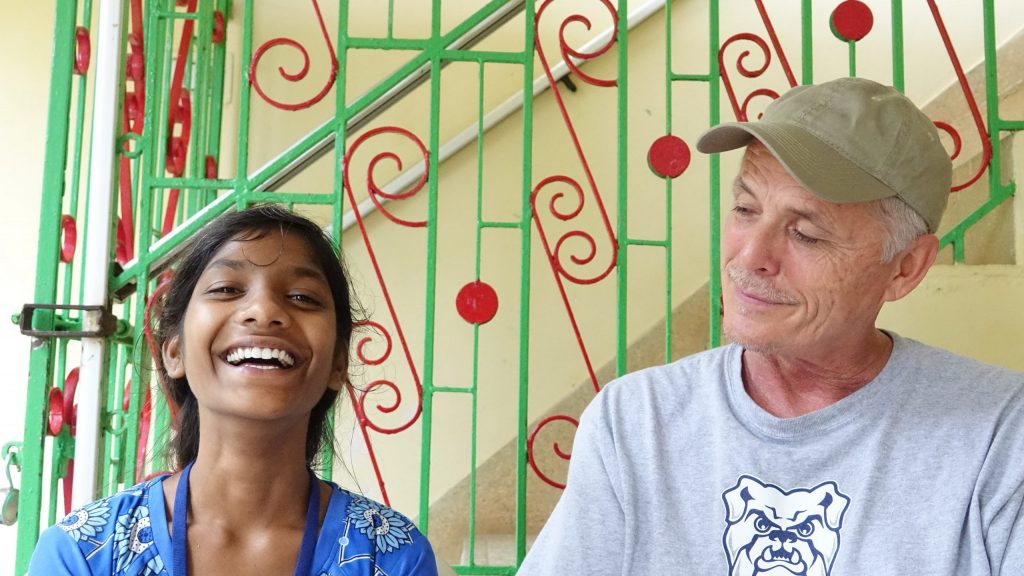 Photos provided by Gene Ort
Cacillia, a young Indian girl whose education was sponsored by the Knights of Columbus Council 4263 at St. Pius X in Granger, shares a laugh with Dan LaFree, who is a member of that council and proud supporter of The Rhema Project.

Nearly 20 years ago, Blacketor began traveling to India for mission work. He was originally asked to help rebuild a village destroyed in the 2004 tsunami. “I truly had no desire to go,” he admitted, but eventually said yes. On that trip, he witnessed a family walking back from the nearby river; the mother and infant she carried drenched with water. His persistent questioning of his guide finally yielded an answer that he was not prepared for – the family had just drowned their newborn daughter.

He stated that he “couldn’t fathom” the trauma Indian mothers faced as they were forced to bury their children simply “because they’re girls. But that happens all the time.” Female infanticide is a common occurrence in India due to the large dowries that families must pay their in-laws when their daughters marry. Having a male child means prosperity; a female means exorbitant costs. Gendercide has been decreasing through the years in India, but that is only due to  easier access to abortion, which has surpassed the infanticide death rate in that country.

Being a white man in the tiny villages where the people had likely never seen one made Blacketor something of a celebrity. On another trip to a different village, a place that he described as “the end of the earth,” he engaged in conversation with the elders and broached the subject of infanticide. While the elders denied that such things happened in their village, the children whom he had befriended contradicted them. Often the boys were the ones tasked with burying their baby sisters in their own front yards.

As it happened, a young Indian woman rocked her own infant on a nearby porch, and Blacketor called to her, asking her child’s gender. “The fear on her face” told him that the child was a girl even before the mother admitted it. Knowing he could have an impact on at least one child’s life, Blacketor decided to use his celebrity status to ask if he could give the yet-unnamed child a name. When he asked the village children what he should name her, the name “Rhema” was one of the few he could pronounce.

Saying a prayer of blessing over her, he gave the child back to her mother along with a handful of Indian currency. “That was it. But that was the trigger in that village that this person had value, and some celebrity came in and gave her a name.”

“Truly, at the time, I didn’t know Rhema meant ‘the word of God spoken by man,’” he continued, awestruck. He also found out that the only reason Rhema had survived to receive the gifts he bestowed upon her was because her father’s parents were out of town the day she was born, as it is typically the father’s parents who decide whether a baby girl will live or die. Today, a large number of girls in that same village bear the name “Rhema” because he took action on that day. 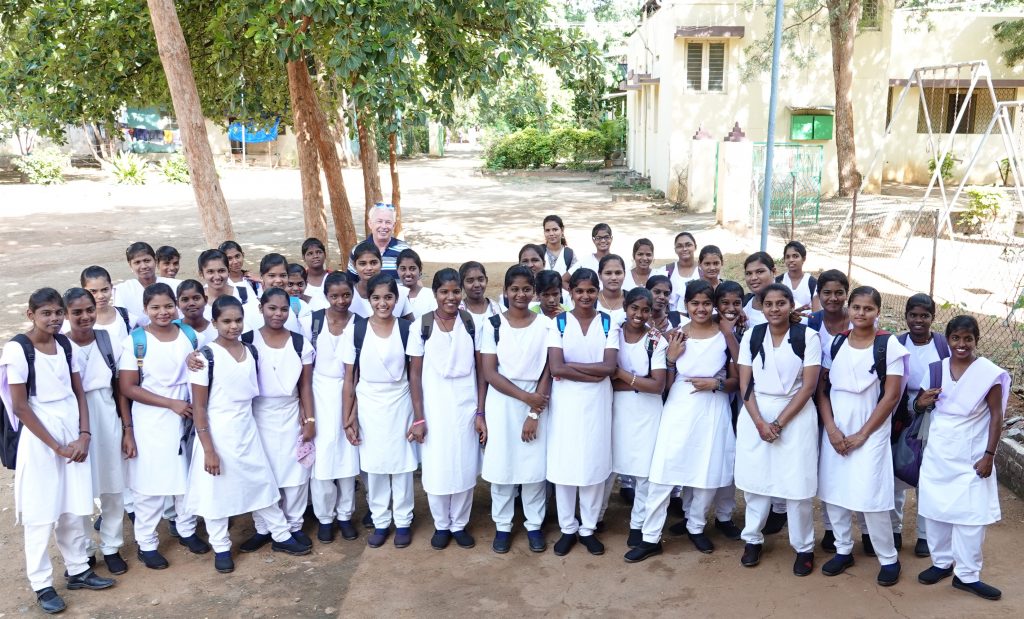 The collaboration between The Rhema Project and Council 4263 came about because of council member Dan LaFree. He and Blacketor had attended school together through high school, then lost touch. LaFree had a business that in 2001 had been failing until he began tithing, after which, “My business was improving dramatically,” LaFree stated, “and we were looking for more places to tithe to. A certain amount goes to the Church, but I was looking for something more direct at the time.”

He happened upon a local newspaper where he recognized his old friend looking back up at him from its pages. The newspaper article covered an organization LaFree had never heard of, so he contacted Blacketor, who invited him to journey to India to meet the girls that The Rhema Project helped. That experience, LaFree said, will “change your heart and your head in a heartbeat,” and he eagerly began supporting the organization. When he eventually sold his business, a portion of the sale also went to The Rhema Project.

“The Knights of Columbus were formed to aid widows and orphans,” LaFree commented. “What better fit than this?” Although many of the girls aided through The Rhema Project are not technical orphans, their plights are nearly as desperate as those of Indian girls without families. “These are village girls. They don’t have pleasant bios.”

LaFree became an advocate for these girls. The cost of sponsorship is minimal, at around $400 a year for education or $600 for education plus room and board. He pitched the idea of financially supporting an Indian girl to Council 4263, and they agreed to sponsor her. Msgr. William Schooler, Pastor of St. Pius X, backs The Rhema Project as well, tithing to it yearly. The council now sponsors an additional four girls, and Columbia Magazine, the national publication of the Knights of Columbus, recently released a YouTube video about the council’s work. Featured in the video was the first girl they helped, Cacillia. 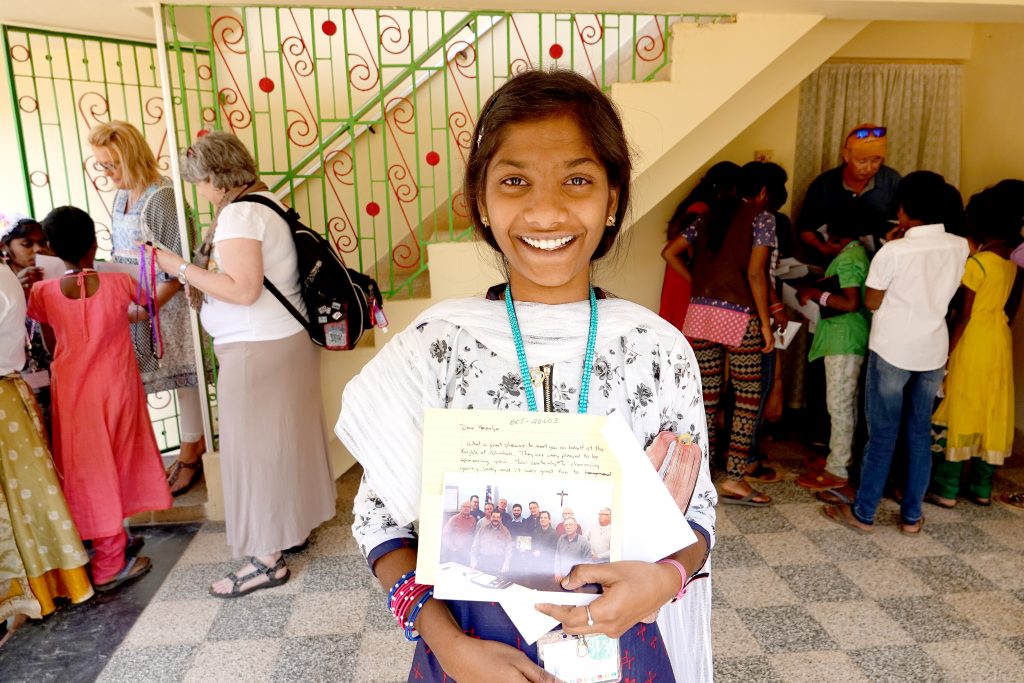 Cacillia shows off a letter and photo from the Knights of Columbus Council 4263, who helped pay for her education in the medical field. She is now studying at a university in Salem, India, a rare privilege for a girl found hanging on an orphanage gate in a plastic bag as a baby.

There are few life expectations for a baby found hanging in a grocery bag on an orphanage gate. Yet that is exactly how Cacillia’s life began. It is believed that her grandmother, aware that Cacillia was going to be killed, spirited her away in the night and placed her at the mercy of those who ran the orphanage. To this day, Cacillia does not know her birthday or the family that wants nothing more to do with her.

But her persistence in school led her to an opportunity most young girls in India never receive. Schooling in India works very differently than in the U.S. At around the fifth- or sixth-grade equivalent, most girls stop attending school, if they even get that far. Because of the sponsorship of the Knights of Columbus, Cacillia was able to continue her studies through what would have been a high-school level.

At the end of that education level, students in India take a national test and are numbered based on their test scores. Colleges then allow a certain percentage of the top scorers to attend various universities in the country. Cacillia “scored so high, especially being an orphan from a little village, that one of the universities in Salem, which is a major city, said she could come study there,” Blacketor proudly reported.

A photograph hangs by Cacillia’s bunk in the orphanage, one that was sent to her from a faraway place in Indiana – a photo of the Knights of Columbus councilmembers whose sponsorship made her education possible. “It’s a big deal to her,” LaFree added.

The girl whose odds had been “less than half a percent,” according to Blacketor, is now studying nursing, as do most of the girls sponsored through The Rhema Project. “She’s a tough little kid. Tough-minded, knew what she had to do to succeed and she’s excelled, she really has,” said LaFree.

Since most Indian girls do not make it so far in their education, the organization helped found a community college on the Bethel campus that specializes in nursing programs. Within two years, the girls graduate and can go to work at hospitals in larger cities or government-sponsored hospitals, which offer even higher pay for those whose lives were once considered worthless. Even if they choose to remain in their villages, these young women can become something akin to local doctors, respected and valued in their own communities as they had not been before. 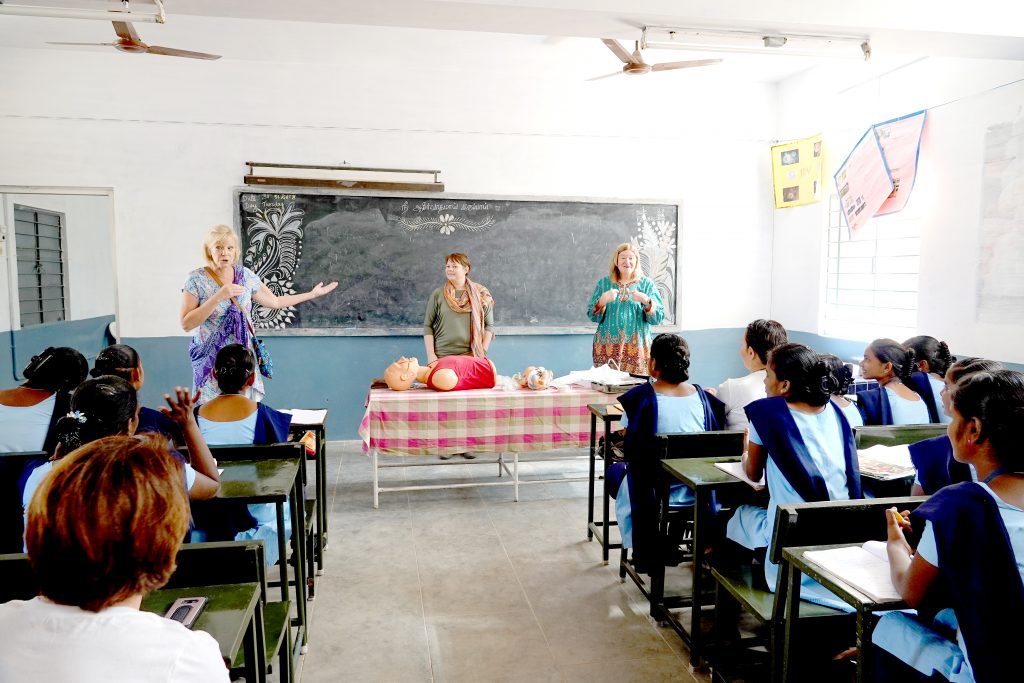 Young Indian girls study nursing at a community college attached to the Bethel orphanage, where many of these unwanted daughters have found a home and a purpose to their lives.

“A Different Level of Love”

The love that the girls showered upon LaFree on his trip to India remains unforgettably ingrained in his memory. “These kids … they have a different level of love, and they demonstrate it. I could not sit without six hands on me. … You couldn’t walk anywhere without six or eight girls vying to hold your hand.”

Though they can’t save every girl in India, Blacketor and LaFree hope that someday the people of the country, particularly the Catholic population, will take ownership of the problem and come to the aid of their own young women. Until then, they will continue to help those they can, embodying the Knights of Columbus’ mission to aid those in greatest need.

Blacketor said that he knows his organization is no longer needed in a village “when a dad’s holding his daughter, the baby has the makeup, earrings, the bangles, a dress on; then you know she has a protector — the dad’s going to be the protector for her and they don’t need an organization from America to help with that anymore.”

Sponsorship costs might seem intimidating for some, but anyone interested in helping in even the smallest of ways can donate to the general fund, which helps cover the most pressing needs at the time, and know that 100% of funds go directly to India to support the girls.

No matter where a person lives or what he or she does for a living, Blacketor hopes that his story – Rhema’s story – encourages others “to do something, wherever God wants to plant them.”

Because when God is given control, one person can make a difference, no matter what.