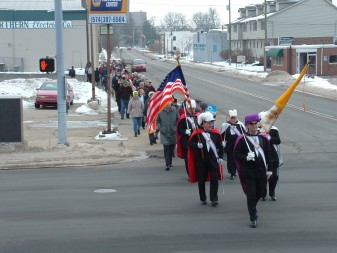 Over 100 people participated at the South Bend rally for life held on Jan. 17.

SOUTH BEND — South Bend area pro-lifers have remained undeterred in the struggle to end abortion as the U.S. enters the 37th year since Roe v. Wade and Doe vs. Bolton, which legalized abortion. The Knights of Columbus annual march and program on Jan. 17 drew 115 participants who came to offer a public witness to life and to become more informed about local pro-life efforts.

Attendees processed from K of C Council 553 to nearby St. Joseph Catholic Church for a brief prayer service led by Holy Cross Deacon Kevin Grove.
Referring to Bishop Rhoades’ episcopal motto, “veritatem in caritate” (“the truth in charity”), Deacon Grove said that at his recent installation the bishop explained that the truth without love is not the truth; and reciprocally love without the truth of Jesus Christ is not love. The deacon emphasized that “our witness to truth can only be legitimate if it is a witness of love.”

Back at the council, St. Joseph County Right to Life President Tom Gill outlined the current situation. On the negative side, the number of highly respectable organizations that have affirmed their support of or have policies that support abortion or embryo destructive research is increasing. If pending healthcare legislation is passed it is estimated an additional 400,000 Americans will be killed by abortion each year. Pro-abortion organizations are well financed.

On the positive side, however, Gill noted that for the first time since polling began, a majority of Americans describe themselves as pro-life. The abortion issue has been forced into the public forum more than ever before. More and more post-abortive women are speaking out. The number of abortions is trending downward, both nationally and locally.

Bobby Williams, founder and director of the Women’s Care Center Foundation, detailed the care centers’ astounding accomplishments. Since 1984, 110,000 women have been served — more than any other crisis pregnancy group in America. There are 15 Women’s Care Centers in four Great Lakes states. In 2009 alone, 14,000 women were served, making 70,000 visits. In one year 816,000 diapers were distributed. Williams attributed this success to the servant leadership of WCC President Ann Manion and adhering to the founding vision of unconditional love and support, providing hope to women in need.

Karen DeLucenay, director of Hannah’s House for unwed mothers since 1997, said the outreach served 27 young mothers in 2009. The ministry provides a Christian environment where the young women can realize their own dignity and worth. Hannah’s House provides these women with counseling, educational opportunities to earn their G.E.D, parenting classes, assistance with goal setting and future employment, and prenatal care for their babies. K of C Council 553 at Hill and Washington streets in South Bend will be holding a benefit spaghetti supper from 4 -7 p.m. Feb. 13 to raise funds for Hannah’s House.

Mary Akre, director of the South Bend-Mishawaka 40 Days for Life campaign announced the spring campaign will begin on Ash Wednesday, Feb. 17, and conclude Palm Sunday, March 31. A 12-hour daily vigil will be kept at the Women’s Pavilion abortion business from 7 a.m. to 7 p.m. Akre stressed that prayer and fasting is something everyone can do.

Post-abortion healing is a key component to the integral pastoral plan established by the American Catholic bishops in 1975. Lisa Everett, co-director of the diocese’s Family Life Office described how Vicki Thorn set out to help a friend recover after her abortion. Putting her education in psychology and personal experience to work, she eventually began Project Rachel, which has developed into a national ministry that reaches out to post-abortive women offering them hope and healing. Locally, Margarita Rodriguez, a bilingual former Women’s Care Center counselor, will be taking the Project Rachel hotline calls.

Concluding the afternoon Tom Gill encouraged everyone to vote pro-life, participate in pro-life events, volunteer to help pro-life initiatives, boycott pro-abortion corporations and donate to the cause.