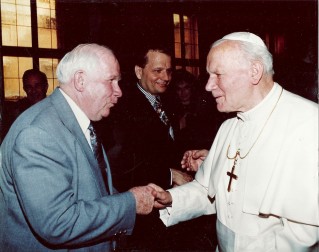 Joseph Stackowicz never guessed when he started his career as a general agent for the Knights of Columbus that it would lead him to see not just one pope but three. In 1972, Joe, as he likes to be called, won his first trip with the Knights and visited Poland and Italy.

“There were 57 of us on the trip,” recalled Joe. The Knights of Columbus arranged a special visit with Pope Paul VI. “It was so special, it really hit us all.” The Knights attended a special Mass with the pope and gathered in the courtyard with thousands of other tourists to see the pope give his blessing from the window.

Joe’s second visit with the pope would come a few years later when he again won a trip to Italy. The Knights were able to have another private meeting, this time with Pope John Paul I. “It was a special trip, the Mass we attended was so beautiful,” Joe said.

In 1992, Joe would have another chance to go to Italy and see the pope. The trip was won again through the Knights and this time Joe’s wife, Fran, and two of his grandchildren were able to go with him.

“The trip was outstanding. We were able to have a private meeting with Pope John Paul II in his residence. It was incredible. At that time the Vatican took all photos and we were able to have eight pictures taken with the pope. I spoke with him in Polish, though mine was a bit broken, it was still very special. Everyone had been saying how much I resembled John Paul II. When I was able to meet him I had to agree,” laughed Joe.

On this trip many Knights attended Mass with their wives. Joe recalled how one wife was so excited to meet the pope when they first arrived that “she practically flew over the isle to shake his hand, we all had a laugh about that,” he said smiling.

“It was a trip of a lifetime, something we will never forget.” Joe was even given a miter hat by the Vatican. “To this day people always want me to put it on. I often have guests in town to see Notre Dame and they always want me to put it on and take pictures with me — Pope Joe they call me. I still get a kick out of it and can show my photos off with Pope John Paul II,” said Joe.

When Pope John Paul visited Chicago in October of 1979, Joe was selected by the Knights to serve as one of the honor guards. “I was absolutely thrilled,” Joe said. “I called everyone I knew and told them to look for me on TV.”

Unfortunately Joe caught a very bad cold and became ill. He wasn’t able to make the trip. “I was so disappointed,” remembered Joe, “I did get quite a few calls telling me they had seen me on TV. That was pretty funny since I wasn’t there,” he said smiling.

Joe would get one more chance to see the pope, and this time he wasn’t going to miss it. In October 1995, Joe’s son John arranged special seats for his parents when John Paul II celebrated Mass at Giants Stadium in New Jersey. It was the second largest crowd to ever attend an event at Giants Stadium, with 82,948 in attendance.

“It was pouring rain the whole time,” recalled Joe, “We said the rosary five times waiting for him to arrive. But when he did it was worth it. To see him again was wonderful. I felt so blessed to be near him. It was a wonderful Mass, even as God showered rain down on us. I will never forget it.”

Joe has traveled all over the world. He often travels with his children and grandchildren. “We try to take a trip every year.” In fact he visited Poland with his grandson a few years ago to meet some long-lost relatives and see the places Pope John Paul II lived and worked.

“It was an incredible experience. We visited all over and found relatives we never knew we had. In fact, his grandson fell in love with a distant relative and the two were married last year. Now that’s a productive trip!” Joe said laughing. They have also visited Mexico, Jamaica and the Dominican Republic. “God’s world is beautiful, I am very lucky to have been able to see so much of it.”

Joe looks back on his visits with the popes and knows how fortunate he has been. “To have the chance to see the pope is special, I truly believe I have been blessed and hope my streak will not end at John Paul II.”

Joe is hoping Pope Benedict XVI will come to the United States soon.

“Maybe this time I won’t miss the pope if he comes to Chicago,” he concluded with a look of hope in his eyes and a smile on his face.