In November, incoming U.S. President Joe Biden said at a Jesuit Refugee Service event that he would be heading in a dramatically different direction than the previous administration on refugee admissions.

On Feb. 4, Biden delivered on those remarks, signing an executive order to raise the refugee cap to 125,000 for fiscal year 2021.

“It’s going to take time to rebuild what is so badly damaged, but that’s precisely what we’re going to do,” he said, referencing the near dismantling of the program under the Trump administration, which dropped the cap late last year to a historically low figure of 15,000.

As the world faces a crisis of more than 80 million displaced people looking for refuge, the United States can return to what it once was, he said in a televised address at the U.S. Department of State.

“We offered safe haven for those fleeing violence or persecution and our example pushed other nations to open wide their doors, as well,” he said, speaking of a political past when refugee admission was a bipartisan mission. “So, today, I’m approving executive orders to begin the hard work of restoring our refugee admissions program to help meet the unprecedented global need.” 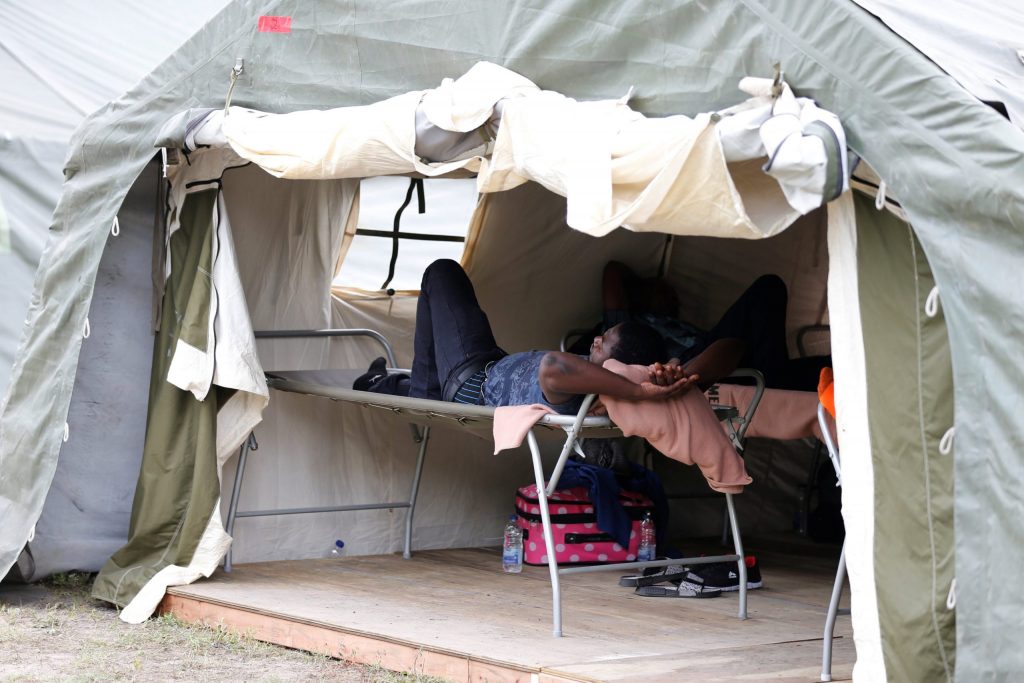 A refugee rests in a tent set up by the Canadian Armed Forces near the U.S.-Canadian border in Lacolle, Quebec Aug. 10, 2017. (CNS photo/Christinne Muschi, Reuters)

Biden said he is directing the State Department “to consult with Congress about making a down payment on that commitment as soon as possible.”

The refugee cap is the maximum number of displaced people the U.S. decides to resettle in a federal fiscal year. Biden initially announced the number of refugees the country would be seeking to resettle in a Nov. 12 virtual event marking the 40th anniversary of JRS.

During the Trump presidency, the U.S. Conference of Catholic Bishops, along with other Catholic organizations and a variety of faith and secular groups, struggled in advocacy efforts with the administration to allow more refugees into the country.

Instead, little by little, Trump’s team whittled away at the numbers — in dramatic fashion.

Hours after taking office in January 2017, the Trump administration announced it was cutting the cap of 110,000 allowed under the Obama administration to 50,000. The administration consistently lowered the number each fiscal year.

Catholic and other faith-based organizations hailed the news about Biden’s executive order.

Susan Gunn, director of the Maryknoll Office for Global Concerns, in a Feb. 4 statement, said the organization “celebrates this decision.”

“Opening our doors to refugees during a global refugee crisis is the right thing to do,” she said. “Maryknoll missioners working in refugee camps around the world know that hundreds of thousands of refugee families have been needlessly suffering and waiting for too long in unsafe conditions … as people of faith here in the United States, we are called to create communities of welcome.”

“Welcoming more refugees, we show the world that we are an open, tolerant nation that protects the vulnerable. Leading by example encourages other countries to be more welcoming as well,” said Bill O’Keefe, executive vice president for mission, mobilization and advocacy at Catholic Relief Services, in responding to the administration’s announcement.

CRS is the U.S. bishops’ overseas relief and development agency.

“As an organization that supports refugees in many countries, including Uganda and Bangladesh, we witness the tremendous strains on these families and communities. COVID-19 has made refugees even more vulnerable. These men, women and children are fleeing war, persecution and extreme violence,” O’Keefe said.

“We will continue to urge the U.S. government to provide humanitarian assistance overseas and address the root causes of forced displacement, including conflict and persecution,” he added. “We need to use all the tools at our disposal, including refugee resettlement, to support the world’s most vulnerable.”

Ashley Feasley, director of policy for Migration and Refugee Services at the USCCB, said in a Nov. 13 interview with Catholic News Service that the change in U.S. refugee policy would take some ramping up of a network of agencies, international and domestic, whose resettlement work trickled in the past few years.

Since the refugee program began 40 years ago, up until the Trump administration, the country had been taking in an average of 80,000 refugees a year.

But agencies and the staff that once helped with resettlement have shuttered their doors. COVID-19 also has thrown a wrench into travel and the ability for workers to vet refugees before they enter the United States.

Feasley said it would take a lot of effort, rebuilding relationships with global agencies such as the United Nations High Commissioner for Refugees, to get the program back up to what it once was.

“I don’t see them getting to 125,000 this fiscal year, but I do see a rebuilding of the infrastructure,” Feasley said in the November 2020 interview after Biden had made clear plans to raise the cap.

Working with refugee resettlement is an opportunity to embrace the call of Pope Francis to “welcome, protect, promote and integrate” some of the most vulnerable among us,” Feasley said.