VATICAN CITY (CNS) — Stopping to gaze at and perhaps pray before a Nativity scene is one of the best ways to remember the real meaning of Christmas, Pope Francis said.

“In its genuine poverty,” the pope said, “the creche helps us to rediscover the true richness of Christmas and to purify ourselves of so many aspects that pollute the Christmas landscape.”

Pope Francis met on Dec. 3 with the artisans who carved the 18-piece Nativity scene in St. Peter’s Square; the donors of the white pine Christmas tree; the residents of a psychiatric rehabilitation center who, along with a group of students and grandparents, created the ornaments; and with representatives of the government of Guatemala, which set up another Nativity scene in the Vatican audience hall. 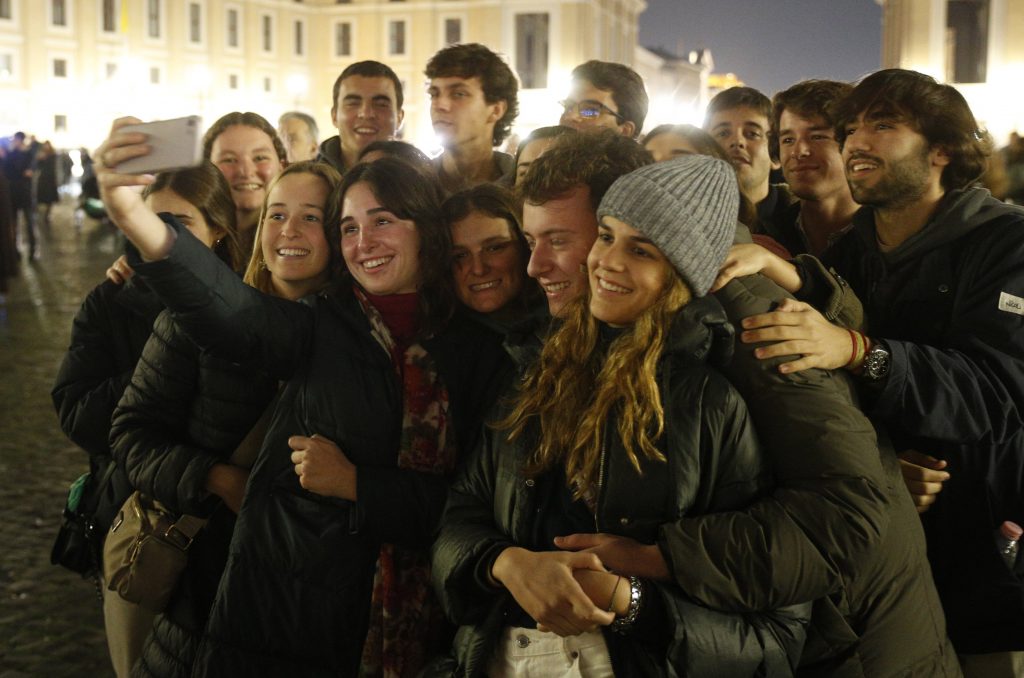 Young people from Spain take a selfie as they wait for the unveiling of the Nativity scene and lighting of the Christmas tree St. Peter’s Square during a ceremony at the Vatican Dec. 3, 2022. (CNS photo/Paul Haring)

“Simple and familiar, the Nativity scene recalls a Christmas that is different from the consumerist and commercial Christmas. It is something else. It reminds us how good it is for us to cherish moments of silence and prayer in our days, often overwhelmed by frenzy,” Pope Francis told them during a midday gathering.

The group was scheduled to gather in St. Peter’s Square in the evening for the official unveiling of the Nativity scene and the lighting of the Christmas tree. But a major rainstorm with a forecast for more rain caused the Vatican to move the evening festivities indoors, although hundreds of people still were in the square for the lighting.

Meeting with the donors, Pope Francis encouraged everyone to find some quiet time to spend before a creche at Christmas.

“Silence encourages contemplation of the child Jesus,” the pope said, and “helps us to become intimate with God, with the fragile simplicity of a tiny newborn baby, with the meekness of His being laid down, with the tender affection of the swaddling clothes that envelop Him.”

“If we really want to celebrate Christmas,” he said, “let us rediscover through the crib the surprise and amazement of littleness, the littleness of God, who makes Himself small, who is not born in the splendor of appearances, but in the poverty of a stable.”

To truly encounter Jesus, the pope said, people must meet Him in the manger, leaving their own vanity and pretense behind. 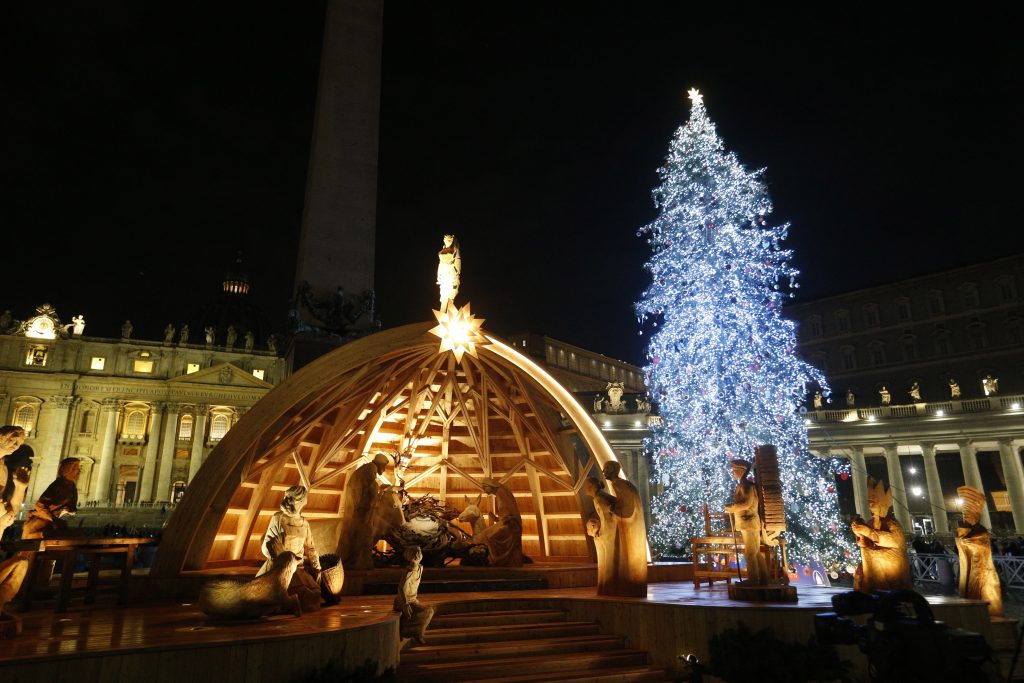 “Prayer is the best way to say thank you before this gift of free love, to say thank you to Jesus who desires to enter our homes and our hearts,” he said. “Yes, God loves us so much that He shares our humanity and our lives.”

“Even in the worst moments,” the pope said, “He is there, because He is the Emmanuel, the God with us, the light that illuminates the darkness and the tender presence that accompanies us on our journey.”

The lights on the Christmas tree, he said, are a reminder that Jesus came “to lighten our darkness, our existence often enclosed in the shadow of sin, fear, pain.”

But, the pope said, the tree also should make people think about the importance of roots.

Like a tree, he said, only a person who is “rooted in good soil remains firm, grows, matures, resists the winds that shake him, and becomes a point of reference for those who look upon him.”

The Christmas tree, Pope Francis said, is a reminder of the need to remain rooted in Christ.