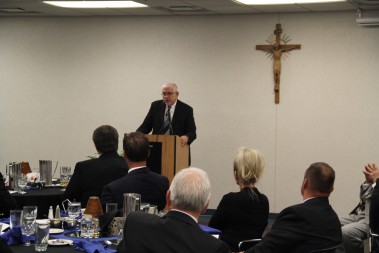 Deacon Marc R. Kellams from the Archdiocese of Indianapolis speaks at the dinner following the Red Mass in Fort Wayne on Sept. 24.

FORT WAYNE — Following an ancient custom dating back to the 13th century, attorneys, law professors, high ranking government officials, guests and others who work in the legal field, gathered at the Cathedral of the Immaculate Conception on Wednesday, Sept. 24, for the celebration of the Red Mass.

Bishop Kevin C. Rhoades celebrated the Red Mass, which gets its name from the red vestments of the celebrant. The vestments represent the tongues of fire of the Holy Spirit, and from the brilliant scarlet robes worn by the Lord High Justices of the Middle Ages.

The Mass is celebrated to invoke divine guidance and strength during the coming term of court, and is celebrated in honor of the Holy Spirit as the source of wisdom, understanding, counsel and fortitude; these gifts of the spirit being essential in the dispensation of justice in the courtroom, as well as in the individual lawyer’s or civil servant’s office.

Assisting at the Red Mass as a special guest was the Honorable Marc R. Kellams, Circuit Court Judge in Monroe County, Indiana, and deacon of the Archdiocese of Indianapolis. He serves St. Charles Borromeo Parish in Bloomington. Deacon Kellams spoke after the Mass on the topic, “The Balance of Faith and Profession.”

Deacon Kellams has been a member of the bar for 36 years. He was ordained to the diaconate in 2008.

He said keeping the two roles of judge and deacon separate has not been near the challenge one might think.

“Fortunately, my judicial responsibilities as a criminal court judge do not include actions that force me into ethical dilemmas,” he said at the talk following the Red Mass dinner in the Archbishop Noll Catholic Center.

Deacons are visible while fulfilling their sacramental duties — serving at Mass, baptizing infants, witnessing weddings and participating in various roles at funeral and committal services.

“The true ministry of a deacon however is one of service,” Deacon Kellams said. “Acts Chapter 6 tells of the need of deacons to assist the apostles to serve the widows. Thus the first deacons were chosen to be of service so that the apostles could better fulfill their responsibilities.”

Each deacon has a particular diaconate vocation. “Mine is to the elderly and the sick,” he said. “I visit hospitals, eldercare facilities and the homebound. I coordinate a cadre of volunteers, and I spend time with the dying and their families.”

The death of his daughter nearly five years ago to brain cancer has given him special skills and a keen insight into dying “that helps me be of service to those suffering the end times,” he said.

Deacon Kellams asked those gathered if they think of their public service as a calling, and asked, “And even further have you ever contemplated that the work you do has at its center a touch of the divine?”

He quoted Thomas L. Shaffer, professor emeritus at the University of Notre Dame, who mused in his book “American Lawyers and Their Communities”: “We American lawyers learn to look at the community of the faithful, rather than from it. We stand in the courthouse looking at the church. We see the particular people, even when we claim to belong to it, from the point of view of the government. When we are able to change the place where we stand, when we walk across the street and look at the courthouse from the church, we notice a couple of things about the way the government in America regards the community of the faithful.”

Deacon Kellams asked, “Do we actually consider our public self and our private self as dual personalities in the body of one person, both secular and religious at the same time?”

The judge added, in Shaffer’s book, “Faith and the Professions,” he actually came to the conclusion that those who practice law had the responsibility to be moral teachers.

“For a long time I tended to look at my faith as a matter separate from my profession, as something that shaped my private life, something that I shared with family and others of like mind,” the deacon said. “But how is it that one is able to so abstractly divide a life?”

“If we are being honest, most of us in public service are here for the simple and often stated motive that we want to be of service to others; that we want to share our talents for the betterment of humankind,” he noted. “And so it is that the lessons of our faith, even if never spoken, and certainly never out-rightly attributed — at least by most of us — are intrinsically and fundamentally a part of who we are, and thus of what we do and how we do it.”

Deacon Kellams said, “The Catholic Church is not just an organization I belong to. It is not just something I am or do for one hour every week. It is instead at the very heart of who I am and how I function. Now do not misunderstand, I’m not one to speak in religious terms, ‘Christ-speak’ as I call it, dropping the Lord’s name in my comments, and I do not display my faith in a professionally public way, or even in symbolic ways — and in fact I tend to distrust those in the profession who do. I choose instead to follow the instruction in Matthew, Chapter 6, that says: ‘Beware of practicing your righteousness before men to be noticed by them; otherwise you have no reward with your Father who is in heaven.’”

“I have also never held the belief that my faith was to be used as a tool, never to be used as a mechanism for changing others, by judicial influence or worse by judicial fiat, into something I found more acceptable,” Deacon Kellams said. “Instead I have endeavored to look upon my faith as a way of influencing and changing the very essence of who I am, not only as a pathway to eternal salvation, but as a way of life; and that through my life I might serve as a positive influence to others.”

“Heaven knows, how often I have failed at that undertaking,” he said, “but as Blessed Teresa of Calcutta so gratefully taught, ‘God does not call us to be successful, but to be faithful.’”

Red Mass planned for Basilica of the Sacred Heart

NOTRE DAME — Bishop Kevin C. Rhoades will celebrate the South Bend Red Mass at the Basilica of the Sacred Heart, on the campus of the University of Notre Dame, on Monday, Oct. 6, at 5:15 p.m. A reception will follow at the Eck Hall of Law, Eck Commons (second floor). The public is invited.