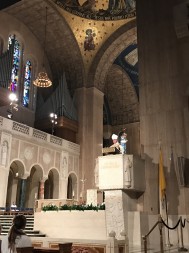 WASHINGTON (CNS) — Several contingents from the Diocese of South Bend-Fort Wayne and tens of thousands of other pro-lifers filled the grounds near the Washington Monument and marched up Constitution Avenue to the U.S. Supreme Court Jan. 27 as both a protest of legalized abortion and a celebration of successful pro-life efforts across the country.

In years past, the March for Life — which takes place on or near Jan. 22 to mark the U.S. Supreme Court’s 1973 decisions in Roe v. Wade and Doe v. Bolton that legalized abortion virtually on demand — has been almost a battle cry for the uphill and constant fight faced by those in the pro-life movement hoping for more abortion restrictions and ultimately an end to abortion.

This year’s March for Life, under mostly sunny skies and 40-degree temperatures, was decidedly more upbeat, in part because one of the first speakers was Vice President Mike Pence: the first time a vice president attended the rally.

Pence, who has marched at the event before as a participant and addressed it as a congressman, repeatedly told the crowd — huddled together in winter coats and hats in front of the stage — that “life is winning” and assured them the Trump administration was behind them.

Youth from the Diocese of Fort Wayne-South Bend stand in support of life at the national march in Washington, D.C., Friday, Jan. 27. 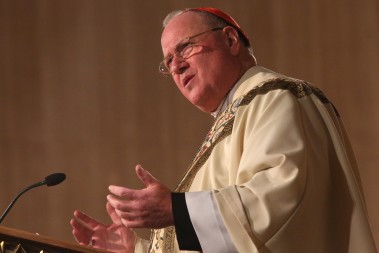 New York Cardinal Timothy M. Dolan, chairman of the U.S. bishops’ Committee on Pro-Life Activities, delivers the homily during the opening Mass of the National Prayer Vigil for Life at the Basilica of the National Shrine of the Immaculate Conception in Washington Jan. 26. The all-night vigil is held before the annual March for Life, which this year marked the 44th anniversary of the Supreme Court’s Roe v. Wade decision that legalized abortion across the nation.

Kellyanne Conway, special adviser to Trump, and the first on the speakers’ list to address the group — holding aloft placards but none of the usual giant banners, which were banned for security reasons — similarly got plenty of cheers when she said: “This is a new day, a new dawn for life.”

Bishop Kevin C. Rhoades gives a homily at a diocesan Mass for pilgrims at the National Shrine of the Immaculate Conception, Washington, D.C., on Saturday morning.

Bishop Kevin C. Rhoades joined the adults, young people and several parish priests and religious from the diocese in Washington, where he concelebrated the Jan. 26 opening Mass for the National Prayer Vigil for Life with Cardinal Timothy Dolan at the Basilica of the National Shrine of the Immaculate Conception. On Friday the group joined their Catholic brothers and sisters for the walk down the National Mall to the Supreme Court.

Jeanne Mancini, president of March for Life, noted that the group has been marching in all types of bad weather over the years. She also pointed out that amid recent discussion about crowd size at events in Washington, it was hard to measure the number of people that day or for the total who have come out for the annual march over the past four decades. “The only number we care about is the 58 million” lost to abortion since it was legalized, she said.

As in years past, the crowd was primarily young, with a lot of high school and college-age groups. It was something the speakers took note of, saying this generation would not only keep the pro-life movement going but bring about changes.

Andrew Ouellette, director of youth ministry for the diocese, and Carl Loesch, director of the Secretariat for Catholic Education, accompanied the Fort Wayne-South Bend contingent to the nation’s capital. 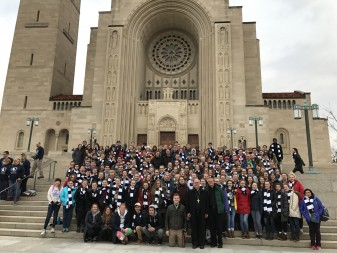 High school youth and chaperones from the South Bend, Mishawaka and Elkhart area pose with Bishop Rhoades outside the National Shrine of the Immaculate Conception.

“I am always honored to lead the youth of our diocese to Washington, D.C., for the annual March for Life,” said Ouellette. “This past weekend is a reminder to me as to why I went into diocesan ministry in the first place and why this march is so important. On our return home, I always notice how many of the teens come back with a desire and a zeal to spread the good news of life and to grow in their relationship with Jesus Christ through the sacraments.”

Loesch noted that the young people especially enjoyed hearing Vice President Pence and some of the other speakers at the rally before the march. “They were very moved by Representative Mia Love’s personal witness of her parents choosing life for her despite their difficult situation,” he said. Msgr. Michael Heintz and diocesan seminarians at Mount St. Mary Seminary in Emmitsburg, Md., hosted the Fort Wayne-South Bend group for Mass following the march, giving everyone an opportunity to meet with seminarians of the diocese on the way back home.

Father Royce Gregorson, parochial vicar at St. Charles Borromeo Parish in Fort Wayne, accompanied local marchers for the first time in six years. Afterwards, he reflected that “The presence of so many young people is a cause for so much hope for our country and our world.”

He also noted the peaceful tone of the event.

“The marchers” do not carry signs with derogatory language and they refrain from inflammatory statements about people with whom they disagree. … The March for Life reminded me about how much brokenness there is in the world. Women gave testimonies about how their lives had been affected by abortion. Women from minority communities and others from the inner city spoke about how abortion providers prey upon ethnic minorities and the economically disadvantaged. But even more than the brokenness, what stood out was hope.”

“This is a message of love,” said Bridget Donofrio, from Washington, holding aloft a poster-board sign with words written with a black marker: “Respect all women born and unborn.”

Many of the march signs were pre-made placards with messages such as “I am pro abundant life” or “Defund Planned Parenthood” and “I am the pro-life generation.”

The city of Washington, fresh from the inauguration crowd and the women’s march held the next day, seemed prepared for this march.

On the Metro, when two older women asked a young woman for directions and pointed to the group with signs that they wanted to join, the woman looked up from her phone and asked if there was a protest today.

“It’s the March for Life,” one woman said. A few seconds later she added: “It’s not a protest; it’s more of a celebration.”

During a homily delivered to about 3,000 of the faithful from the Diocese of Fort Wayne-South Bend and others on Saturday morning at the National Shrine of the Immaculate Conception, Bishop Rhoades reflected on the letter to the Hebrews, which extols the faith Abraham had in God.

“The author recounts that by faith Abraham went out when God called him, not knowing where he was to go. And then by faith he sojourned in this land of promise, living in tents as a nomad,” Bishop said. “By faith Abraham received power to generate even though he was past the normal age and his wife Sarah was sterile. And by faith, when put to the test, he offered up Isaac.

“We’ve come as pilgrims of faith to this Basilica of Our Lady,” he continued.” By faith, we participated in the March for Life yesterday. We come with faith in God as the Creator and Author of Life. By faith, we stand up for the dignity and sacredness of the lives of unborn children and all human life. When our faith is put to the test, especially in this anti-life and pro-death culture, we need that strong and obedient faith of Abraham, who trusts in God no matter what. When the storms come, our faith can be shaken like that of the disciples in the boat. When we cry out to Him like the disciples, Jesus calms the storm. The Lord brings peace and calm not only to the sea, but to our anxious or fearful hearts.”

Bishop Rhoades then drew a parallel to the faith of those whom he met during a recent visit Catholic Relief Services programs in the Holy Land. He encouraged the March for Life pilgrims to buttress their faith in a manner similar to the Palestinians, who live with crippling scarcity and a lack of freedom of movement.

“We must never give up or lose hope. We must persevere, trusting that goodness will overcome evil and working so that life and justice will prevail. May Mary, our Immaculate Mother, and Saint Thomas Aquinas, the great Angelic Doctor of the Church, intercede for us and all who serve the Gospel of life!”