Bishop Kevin C. Rhoades ordained two seminarians, José Arroyo Acevedo and Daniel Niezer, to the diaconate on Saturday, May 19, during Mass at the Cathedral of the Immaculate Conception, Fort Wayne. Deacon Arroyo is from St. Joseph Parish and Deacon Niezer is from St. Elizabeth Ann Seton Parish, both located in Fort Wayne.

The first part of the ordination rite was the election of the candidates. Arroyo and Niezer were called individually, by name, and they responded that they were present. The two joined Bishop Rhoades in the sanctuary and Father Andrew Budzinski, vocations director for the diocese, presented them to the bishop, testifying that they had been found worthy to be ordained to the diaconate.

After Bishop Rhoades gave his homily, Arroyo and Niezer stood before the bishop, who asked them a series of questions to which the candidates responded, “I do.” During this time, the candidates resolved to be consecrated for the Church’s ministry “by the laying on of my hands and the gift of the Holy Spirit” as the bishop said; “to discharge the office of Deacon with humble charity in order to assist the priestly order and to benefit the Christian people”; and “to conform your way of life always to the example of Christ of whose Body and Blood you are ministers at the altar.”

The Litany of Supplication followed. Arroyo and Niezer prostrated themselves before the altar as a symbol of dying to oneself before arising to a new life in holy orders. After the litany, Bishop Rhoades extended his hands and prayed over each candidate. Arroyo and Niezer then put on their stoles and dalmatics and received the Book of the Gospels. 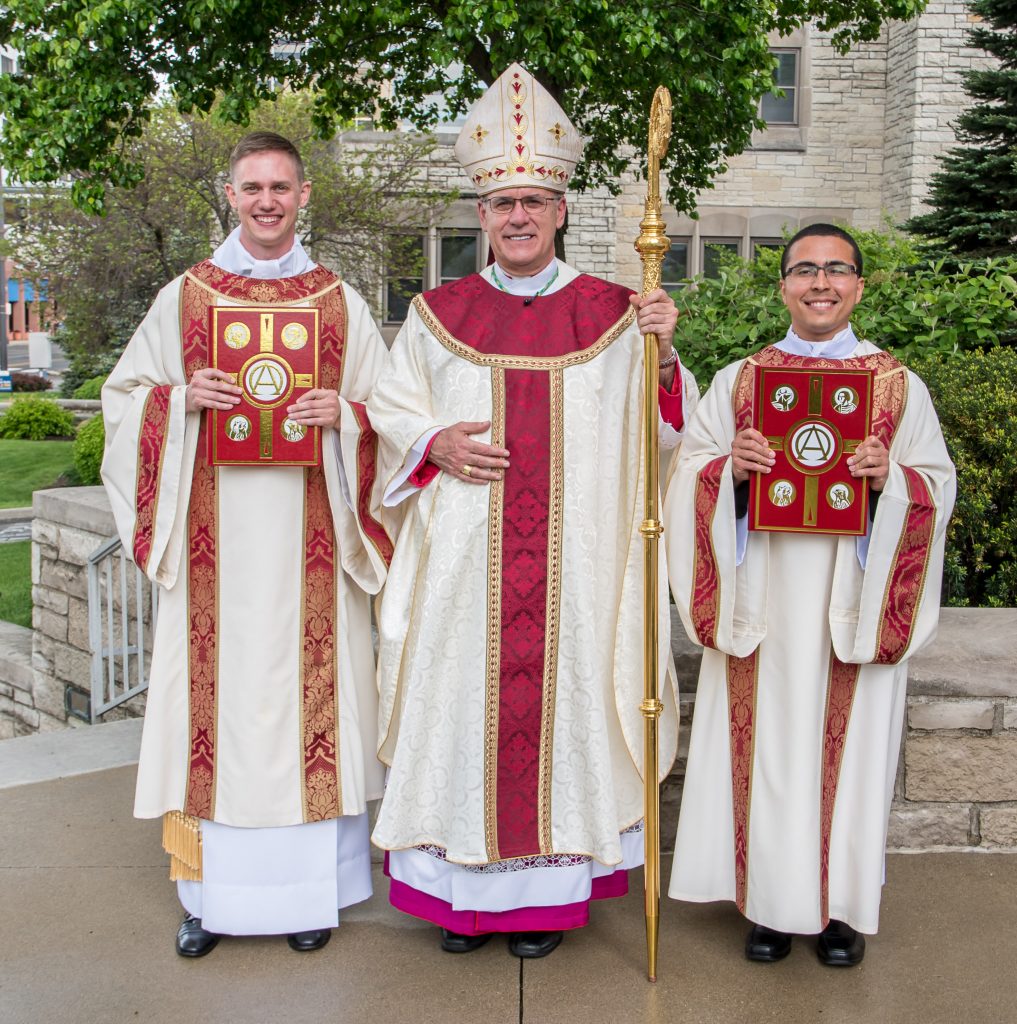 Deacon Arroyo and Deacon Niezer are pictured with Bishop Rhoades at the Cathedral of the Immaculate Conception after the Mass of ordination. Joe Romie

Bishop Rhoades began his homily by speaking about St. Augustine. The saint wanted to be “a servant of Christ” and a “servant of others,” he said. For St. Augustine, in his mind and heart, was always a deacon.

“My brother priests and I know that the diaconate is part of who we are, because we are priests of the Lord who came not to be served, but to serve,” Bishop Rhoades said.

He told Arroyo and Niezer that they should not look at their ordination as a “stepping stone to the priesthood.” He explained that ordination to the diaconate was not just a celebration of a ministry that would last one year, but instead, it is a celebration “of a vocation and ministry that would continue throughout their lives.” The bishop added that Arroyo’s and Niezer’s ministries would expand, and their identities would take on a new character, after their ordination to the priesthood, “but they will not be leaving behind the diaconal character they receive today.” 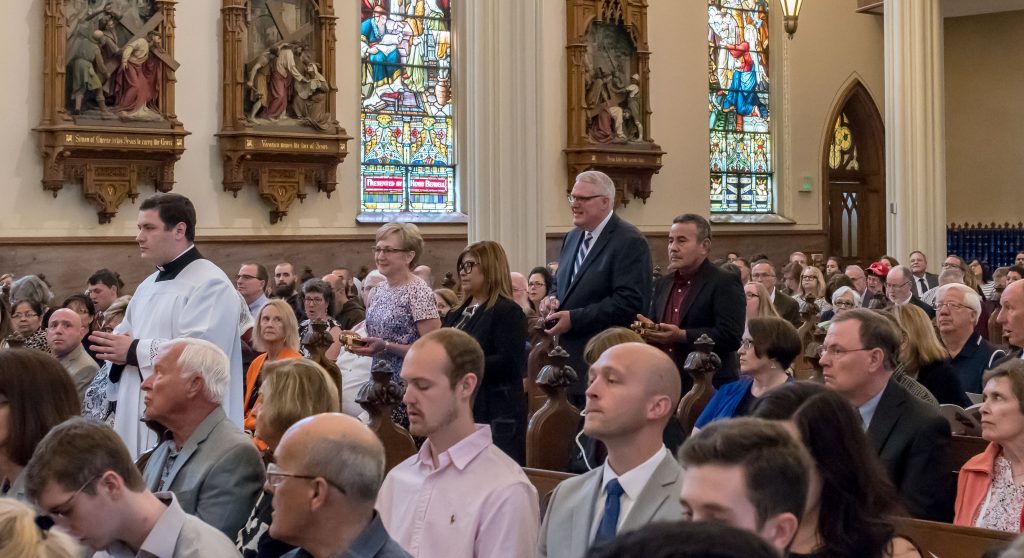 Parents of the newly ordained deacons bring forward the gifts for the liturgy of the Eucharist. Joe Romie

Bishop Rhoades discussed the first reading, which can be chosen for diaconate ordination Masses. The reading from Numbers showed the Levites assisting the priests in the temple liturgy. The Levites tended to the sanctuary, but did not offer the sacrifice. Just like the Levites, “deacons do not offer the Eucharistic sacrifice, but they assist the bishop and priests at the altar.”

The bishop said that besides their service at Mass, Arroyo and Niezer would also celebrate the sacrament of baptism, officiate at marriages, preside at funeral and burial services, bring holy Communion to the sick and dying, and preside at the exposition and benediction of the Blessed Sacrament.

In the Gospel reading, Jesus sent 72 disciples two-by-two to announce that “the Kingdom of God is at hand.” As these disciples went to announce the kingdom of God, the bishop said that Arroyo and Niezer must do the same. He added that the ordained have the task of “preaching God’s word in the liturgy” and to do so “in fidelity to the Word of God and the Church’s tradition.” In addition, he said that the ordained are to preach in a way “that touches the hearts and minds of the people.”

The bishop encouraged Arroyo and Niezer to “be evangelizers beyond the parish church.” He told them to reach out to those no longer practicing the faith or who are unchurched. He added that their “mission as deacons and later as priests is to bring the Gospel to all.”

He also spoke about charity, a deacon’s third ministry. He explained that the ministry of the altar, of the word, and of charity go together and is “a threefold ministry. We must never forget the origin of the diaconate as the service of charity.”

Bishop Rhoades cited part of his homily from this year’s Chrism Mass. He discussed Father Solanus Casey, who had two great loves: “the sick and the poor.” He told Arroyo and Niezer that they were being ordained especially “to serve the poor and the suffering” and to “make them a priority in their ministries.” The bishop urged them to follow the examples of St. Lawrence, who considered the poor and lame “the true treasures of the Church,” and St. Francis of Assisi, who reverenced Christ in the poor and “kissed the leper and tended his wounds.”