The office of deacon in the Catholic Church may be described as one of service in the sacred liturgy and in the ministries of charity; for seminarians José Arroyo and Daniel Niezer, it will also be the last big step toward their ordination to the priesthood next year.

On Saturday, May 19, all may accompany the two seminarians at their Mass of Ordination to the Sacred Order of the Diaconate, which will take place at 11 a.m. at the Cathedral of the Immaculate Conception, Fort Wayne. Recently, Today’s Catholic had the opportunity to interview the candidates prior to this milestone. 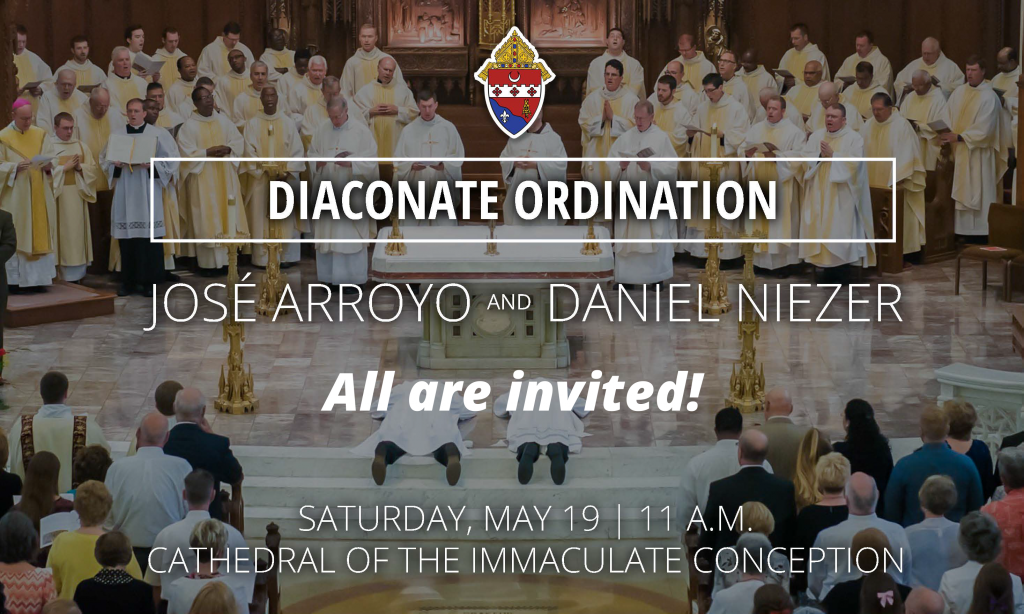 Arroyo grew up in a Puerto Rican family that placed high value on education and sports, he said. His mother is a physical education teacher, and his father, who has a Navy background, is a teacher as well. Arroyo is the second of four boys; his two younger brothers are twins. Both are professional boxers, having participated in the 2008 Olympics.

Early on, at age 9, although his parents did not attend Mass regularly, they asked if he might have an “interest in serving the Church.” His immediate reaction was “no,’’ but by age 15 he had begun to take the question more seriously.

Around that time, Arroyo was exposed to the Eternal Word Television Network. Visiting seminarians also gave him access to materials regarding the priesthood, and he began to be drawn to a closer relationship with his Savior.

Currently finishing his fourth year of theology, Arroyo expresses gratitude for the help he received during his formation from professors along the educational journey. He sees the goal and the focus on becoming a priest as well worth it. He also gives credit to various priests who have served as his spiritual directors. Although discerning and studying to enter the priesthood is a lengthy commitment, time has not been an issue, he said, as it has gone by very quickly.

Arroyo has words for someone who might be considering a religious vocation. His primary advice is “to trust in the Lord.” “If you sense such a desire, then pray about it and talk to someone you trust in the Church. As God calls, do not be afraid. If you are called to holiness, then don’t ignore it. God’s grace is freeing and liberating.”

He shares a special connection with Father Benedict Joseph Groeschel of the Franciscan Friars of the Renewal in New York City, whom he considers a “true man.” Arroyo served at the age of 19 as a caregiver for Father Groeschel following a car accident. He also is grateful to Msgr. Emilio Toro, a priest who helped after a devastating 1989 hurricane in Puerto Rico.

One of his favorite Bible verses is found in Matthew 25 during the last judgment of Jesus. It is proclaimed that “… whatever you did not do for one of these least ones, you did not do for me,” which brings to Arroyo’s mind the work of Mother Teresa with the poor and sick. 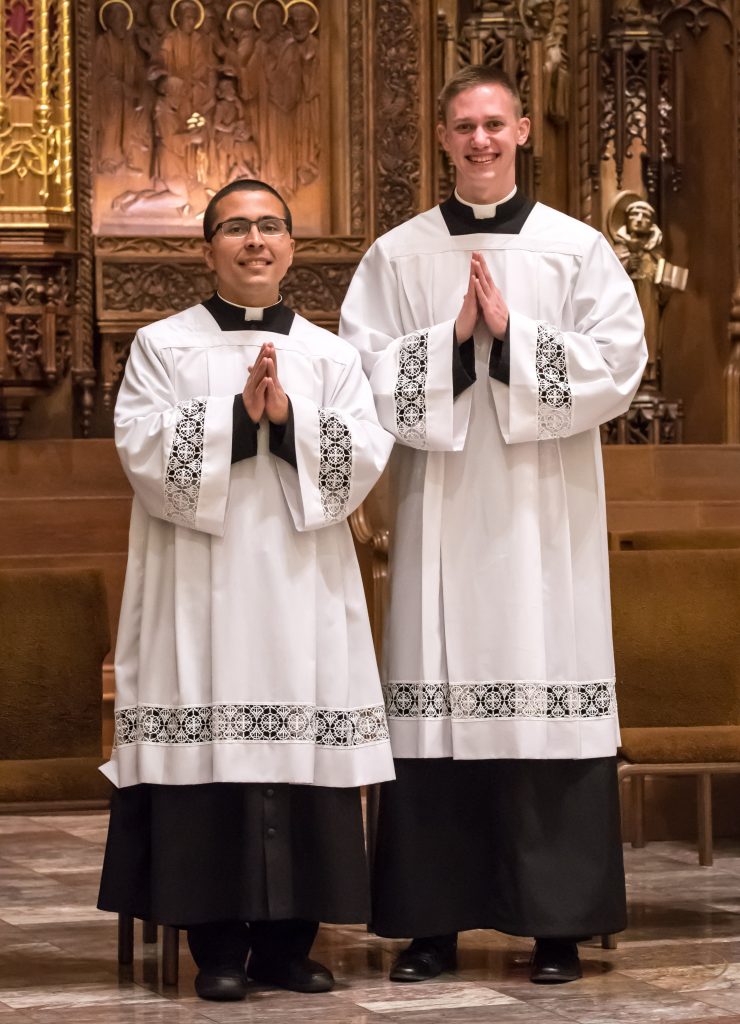 Seminarians José Arroyo, originally of Puerto Rico, and Daniel Niezer, of Fort Wayne, are looking forward with anticipation to their ordination to the diaconate May 19 at the Cathedral of the Immaculate Conception, Fort Wayne. — Joe Romie

Also anxiously anticipating his ordination to the Sacred Order of the Diaconate is Niezer, a young man who grew up very far from Puerto Rico, right here in the Diocese of Fort Wayne-South Bend.

Niezer is the youngest of four children, with an older brother and two older sisters. His Catholic upbringing included membership at St. Elizabeth Ann Seton Parish in southwest Allen County.

Niezer attended public school and then, like his brother and sisters, went to Bishop Dwenger High School in Fort Wayne. He went on to one year at Wabash College. There, he initially desired to study math and economics with a goal of working as an actuary or elsewhere in the accounting profession.

His interest in the religious life and the priesthood began after attending World Youth Day in Madrid, Spain. Niezer returned from World Youth Day with a pronounced excitement about his faith and a desire to practice it more fully. He describes it as a period in which he “fell in love with the faith.” He was also profoundly influenced by talks and time spent with Father Jim Shafer at St. Elizabeth.

Niezer entered the Pontifical College Josephinum in Columbus, Ohio. The breaks when he returned home were filled with talks and inspiration from numerous priests in the Fort Wayne area. Niezer remarked that there are 10 or so priests in the area who have been key in his continued journey toward the priesthood.

The past six years, the time has flown by, he said. He has loved his time in seminary. He has remained close to his very supportive family with every step of the journey.

Niezer encourages prayer and “talking with Jesus” for anyone discerning a vocation to the priesthood.

Ordination to the diaconate will occur for both Arroyo and Niezer on May 19. While being ordained a deacon is an important step in the religious journey of each, both look forward to what will still lie ahead, becoming priests of the diocese. They look forward to being able to serve the Catholic Church in new ways that priestly duties will allow them to participate in once they reach that milestone. Being able to witness and perform marriage during Masses for couples, celebrating the Mass, hearing confessions and giving absolution, and performing last rites are duties that they joyfully anticipate.

Arroyo has the additional gift of being able to preach in both English and Spanish, as well as some knowledge of sign language. He sees an evangelization effort with the deaf as a possible extension of his calling to the priesthood. Niezer is also excited to serve people in new ways.

Ordination will enable both to put into fuller practice the love of Jesus and its expression in daily living. Arroyo and Niezer continue along a journey of faith, ever aware of the responsibilities; but also of the joy and trust extended to them as soon-to-be deacons.