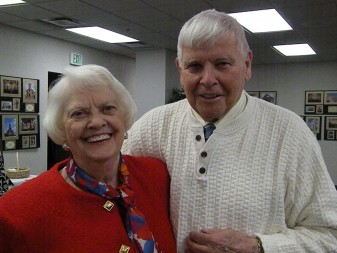 Pat and John Gaughan pose for a photo at a retirement celebration on Jan. 6 for John at the Archbishop Noll Catholic Center. He retires after serving 39 of his 57 years as teacher and coach in the Catholic school system in the Diocese of Fort Wayne-South Bend. At the reception, Bishop John M. D’Arcy thanked Gaughan for his service and dedication.

FORT WAYNE — Eighty-two-year-old John Gaughan lives by faith. “Faith describes me,” he says, adding, “without it I wouldn’t be anything.” And faith is what led him to serve 39 of his 57 years as teacher and coach in the Catholic school system in the diocese.

A native of Chicago, Gaughan and his wife of 58 years, Patricia, moved to Fort Wayne in July of 1959, where he served as athletic director of Bishop Luers High School for eight years. During those years he taught classes at the high school and coached football, track and basketball.
“I did the laundry for all the athletic teams too,” he quips.

His four years of Marine Corps duty during the late ‘40s, including 16 months in North China, motivated him to “be a catalyst for change” and served him well upon his return.

Armed with a bachelor’s degree in sociology in 1953 and eventually a master’s in education administration, he excelled as a young teacher and coach of high school students.

“Potential doesn’t make an A. Performance is what counts,” he says. But he admits that “challenging the young people to become what they are capable of becoming, permeated with the Gospel spirit of freedom, justice and charity” gave his career meaning.

Following the eight years as athletic director at Bishop Luers High School the Gaughans moved back to Illinois where for the next 12 years John served as director of studies, and football and basketball coach at his high school alma mater, St. Bede Academy. Then in 1979 the family moved back to Fort Wayne to stay. Gaughan took the administrative position of principal for Bishop Dwenger High School and led the school for 15 years.

After retiring from the Catholic school system in 1994, Gaughan was invited by Bishop John M. D’Arcy to become the assistant director of the high schools in the diocese, which had him making pastoral visits to all the Catholic high schools, and attending teacher, school board and other meetings. Gaughan also was involved in reviewing the budget with Chief Financial Officer Joseph Ryan several times each year and being the problem solving resource for the four high school principals.

Gaughan retired last month from his position as assistant director of high schools for the diocese and reasons, “I’m 82 years old. … Time is of the essence.” He and his wife are active parishioners of St. Charles Borromeo and have raised nine children, including Father Joseph Gaughan, pastor of Most Precious Blood Parish in Fort Wayne.

Wife Pat says of her husband’s career, “He went into it with love and I guess he’s leaving it with love. He was the guy for the job!”

In his well deserved retirement Gaughan plans to spend more time with his beloved wife and visit their 29 grandchildren more frequently. In addition to continuing to attend daily Mass, the Gaughans also look forward to volunteering to read to students at Most Precious Blood School this semester.

And always a coach — Gaughan will take up the assistant coaching position for the fifth- and sixth-grade combined football team of Most Precious Blood and Queen of Angels Schools.

A retirement reception was held to honor John Gaughan on Jan. 6 at the Archbishop Noll Catholic Center.