Former U.S. President Jimmy Carter and his wife Rosalynn, both in their 90s, were in Mishawaka helping to build 23 single-family houses during the last week of August. This year’s “Jimmy & Rosalynn Carter Work Project” was awarded to St. Joseph County in northern Indiana and the Carters’ special project was to build a porch for one of the houses.

“We want to help the houses look like they’re part of a real neighborhood,” said Habitat volunteer Paul Kil, who led a team from St. Théresé Little Flower Church in South Bend that was landscaping and laying sod at the Carter site. Kil, who grew up in a family that built its own house, said his own carpentry skills are home-grown, but he’s impressed with the training Habitat offers volunteers who come with minimal or no carpentry skills.

At an Aug. 26 opening ceremony for the building project, Holy Cross Father John I. Jenkins, president of the University of Notre Dame, said he was proud that Notre Dame’s student Habitat chapter is one of the largest in the country. 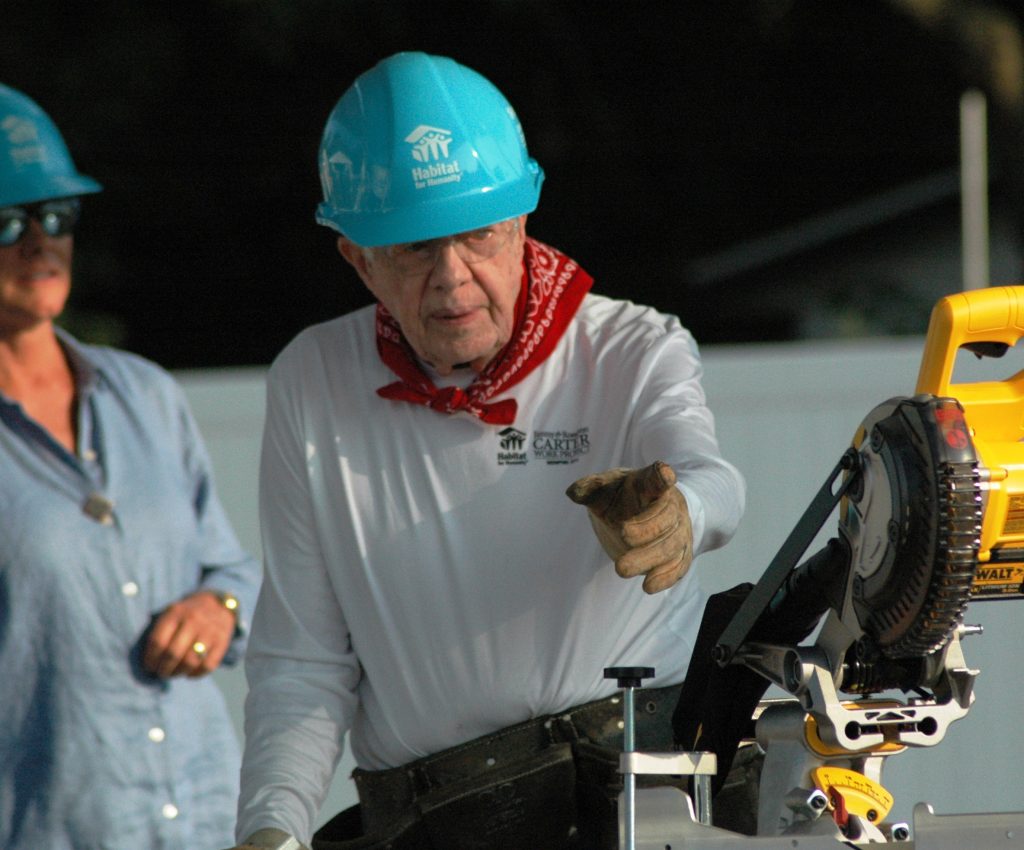 The Carters were longtime friends of the late Holy Cross Father Theodore M. Hesburgh, who was Notre Dame’s president from 1952 to 1987, Father Jenkins said.

Late-night talk show host and Indianapolis native David Letterman introduced the Carters and joked that while his enthusiasm for Habitat is huge, his building skills are limited. “What I quickly learned is that the only thing I can do is hammer. … If there’s a Hammering Hall of Fame, get me in!”

Letterman has been a Habitat volunteer and patron since he watched the devastation of Hurricane Katrina in 2005. He wondered what he could do and Habitat became his answer, he said.

Jimmy Carter told the crowd: “Habitat is not a sacrifice for us. We sometimes get too hot or too cold or work overtime. But, we always feel that we’ve gotten more out of this than we put in.”

He also said it brings hope, noting that he was pleased that he and Rosalynn have drawn international attention to the need for affordable housing since they began working with the organization in 1984.

“Because of Habitat for Humanity … every 50 seconds, a family somewhere in the world is getting a new or improved home,” the former U.S. president said.

Benito and Junixha Salazar were among the 23 families working on the homes going up in Mishawaka.

Like all Habitat “partner families,” the Salazars were helping to pay for their home through sweat equity — 250 hours of volunteer work. They are also attending Habitat-mandated partner family classes on budgeting and home maintenance. Habitat’s partner families get zero-interest home loans.

Habitat involvement has bolstered their faith, said the Salazars, who will live in their single-story house with 4-year-old Isabelle and 2-year-old Benito Jr.

Benito, a Catholic, became a forklift operator to make more money before Isabelle was born, but that meant leaving a job he loved at La Casa de Amistad, a community center serving immigrants in South Bend. Junixha is a social worker who attends a Seventh-day Adventist church.

Working full time and having small children made it tough to attend weekly classes and get the required service hours done, but recently he saw the payoff, Benito said. His new neighborhood was becoming a loving community even before its families moved in. “I help build my neighbor’s garage or put trim on the house. We don’t just work on our own houses. We work on everybody’s houses.”

This Habitat trademark of generosity and community has drawn many volunteers across St. Joseph County.

Jane Pitz, a former religious sister for 32 years, who worked in campus ministry at Notre Dame, could be enjoying a lazy retirement but instead she leads a Habitat Women Build project in St. Joseph County and fundraises for the organization.

A Jimmy Carter quote about the demands of the Gospel and Habitat’s mission echoes her own belief and that of many Habitat volunteers.

She said, Carter believes: “If you are a person of faith … you learn certain basic lessons about truth, justice, love and sharing that shape your life” and through Habitat for Humanity you find a way to “reach out to fellow humans who don’t have a decent place in which to live.”