In their long history, the Jewish people have spent many years living as outsiders in foreign lands, so they understand offering hospitality to displaced persons, even if they have not personally experienced this difficult transition. Showing love to strangers as God commanded prompted the Jewish community within Fort Wayne to help refugees fleeing from their home in Afghanistan. The Congregation Achduth Vesholom and the Jewish Federation presented Catholic Charities with a check for $21,868 on Feb. 15 to support their resettlement efforts.

Rabbi Meir Bargeron represented Congregation Achduth Vesholom and stated that his community stood in solidarity with the Afghan refugees as they begin their new life in Northeast Indiana. “In Jewish life, it is a holy obligation to love the stranger as ourselves, and we understand this as the central principle of the Torah, our holy scriptures,” he said. 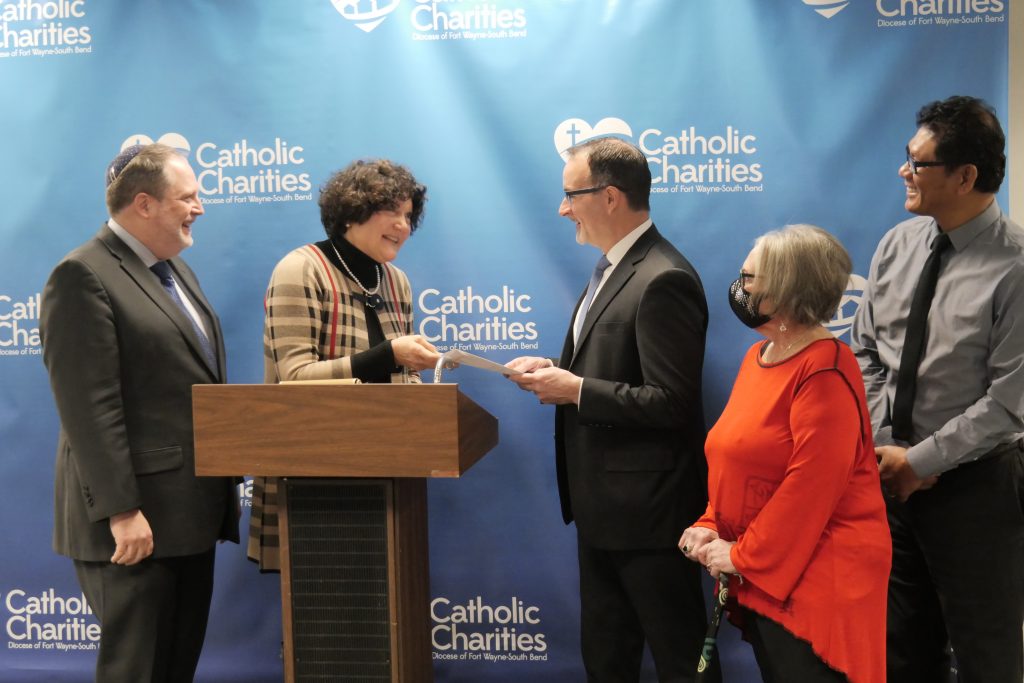 Dan Florin, the new CEO of Catholic Charities, graciously accepted the donation and expressed his gratitude toward the Jewish community. “I’m blown away by the heart of the Fort Wayne community,” Florin commented. He stated that the money would go toward basic necessities for the refugees, including housing, food and English-language lessons. Catholic Charities is working hard to ensure that the refugees become self-sufficient in their new home.

Initially, only 75 people were expected to come to the Fort Wayne area, but with the overwhelming number of evacuees from Afghanistan, that number has increased to more than 100, and could potentially grow even larger. Catholic Charities has also begun a resettlement project in South Bend for Afghan families. At least two of the refugees who came to the Northeast Indiana region served in the Afghan army, working closely with the U.S. military. These newcomers “can’t survive without a network of community,” said Florin. The joining of the Jewish Federation demonstrates that desire to help others in need.

When asked if other organizations have been involved in welcoming the men, women and children from Afghanistan, Florin said that he has seen many organizations come together to aid the newly resettled refugees.

It was in December that the Jewish community decided to begin a month-long fundraiser to help with the resettlement efforts after Catholic Charities representatives spoke at the temple. The initial goal was to raise $5,000, which the Jewish Federation of Fort Wayne agreed to match. The early generosity of the congregation stunned organizers, who raised the goal to $10,000. Their website states that: “We more than tripled the initial congregation goal of $5,000, collecting $16,868 from our Temple family.”

Nyein Chan is the director of Catholic Charities’ refugee resettlement program. He knows how it feels to be a stranger in a foreign land because he has lived it himself as a refugee from Myanmar (formerly Burma) decades ago. He has been involved in helping those like himself, most recently those from Afghanistan. He was one of the presenters at the Jewish community gathering, speaking about his experiences as a refugee and the need for continued assistance in this area. After the check presentation, he thanked the Jewish community for their contribution to advance this necessary work.

Though unable to attend the event, Dr. Scott Salon, vice president of the federation board executive committee, provided a statement that read: “As a people dedicated to living our Jewish values, we are committed and obligated to help the stranger in our midst and to ‘Tikkun Olam,’ which in Hebrew means, ‘to repair the world.’ The size of the Fort Wayne Jewish community is small numerically, but our compassion is not.”

He added that he was very proud of the Jewish community’s generosity that far surpassed their fundraising goals.