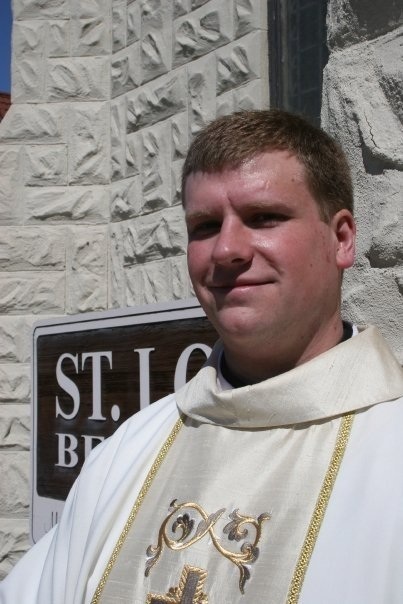 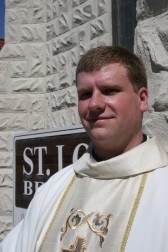 SOUTH BEND — With ordination less than two weeks away, Deacon Jacob Runyon, or Deacon Jake as he’s known, is excited about the upcoming event that will mark a new life for him.

“I’m excited to serve the people and church in Fort Wayne and South Bend,” he says enthusiastically.

The days preceding his ordination into the holy priesthood, he notes, will be filled with prayer.

This young man, who desires to keep prayer central to his life, heard God’s call in his adolescence. Born the oldest of 11 children to Mary (Tippmann) and Terry Runyon, Deacon Runyon considers himself a faithful Catholic. His family attended Mass, prayed the rosary and participated in the Stations of the Cross during Lent together.

“Faith is a constant in my family background,” he reports.

Of his vocation call he says, “The first time I thought of the priesthood was when I visited Denver and saw the pope.”

But that calling was “put on hold” during high school and the subsequent years when Runyon worked not only at a restaurant but later at a paint ball company for three years.

As sponsor for his brother-in-law who was engaged in RCIA, Runyon began to learn more about his faith and soon was questioning his life’s purpose. His questions included the priesthood, but with worries about all that he would have to give up to become a priest.

Then in 2001, during his Lenten sacrifice to attend daily Mass, Runyon began to hear God’s call once again. And after a “vague e-mail” to and subsequent meeting with Father Bernard Galic, director of the Office of Vocations, he began the process of applying to seminary.

With only two months to the start of the next seminary session, Runyon was surprised and pleased that the process of testing and interviews went so smoothly.

“It was pretty neat how it all worked out,” he recalls.

Deacon Runyon studied for two years at St. John’s Seminary in Boston, until the diocese relocated its undergraduate seminarian studies to Immaculate Heart of Mary Seminary in Winona, Minn., where he earned his bachelor’s degree in philosophy in 2005. His experience of the seminary, after being on his own since age 18, was positive.

“I loved the seminary. I was able to put my life in it and devote myself to it. It was fantastic!” he says.
He was ordained into the diaconate in 2008. Continuing his studies at the Pontifical College Josephinum, Runyon earned a master of divinity with a focus on Scripture this May.

After returning to Fort Wayne following graduation, he received his assignment to assist at St. Matthew Cathedral in South Bend. There he has been involved in a number of baptisms, marriage preparation classes and weddings, and funerals, as well as presenting his own homilies three times each week.

Deacon Runyon is also chaplain of Marian High School, where he meets with students during his visits. He teaches seventh-grade religion classes at St. Matthew Cathedral and has taught RCIA classes in the past.

His work at the co-cathedral has impassioned this already passionate man to service.

“It’s exciting to be doing this,” says the soon-to-be Father Runyon. “I’ve been wanting to do this for eight years. I have the training to do it. And it’s exactly what I want to do!”

This prayerful man has a playful side as well. He enjoys being with friends, watching movies, playing softball, golfing and his passion — cycling. “I am an avid cyclist. I ride about 100 miles a week,” he says.

As for ordination Deacon Runyon is excited and grateful for the support of his church, family and friends.

“The bishop says the priesthood is not for the person who receives it, but for the church,” he says.

Of becoming a priest, Deacon Runyon says, “Being able to draw people to Christ attracts me. It’s a sacramental ministry.” He anticipates the joy of facilitating Mass, reconciliation and even helping others find how RCIA can change a life.

And he adds, “I want to stay a man of prayer. I’ll do what the Lord asks. As I try to grow closer to Jesus, I want to help others encounter Christ as well.”