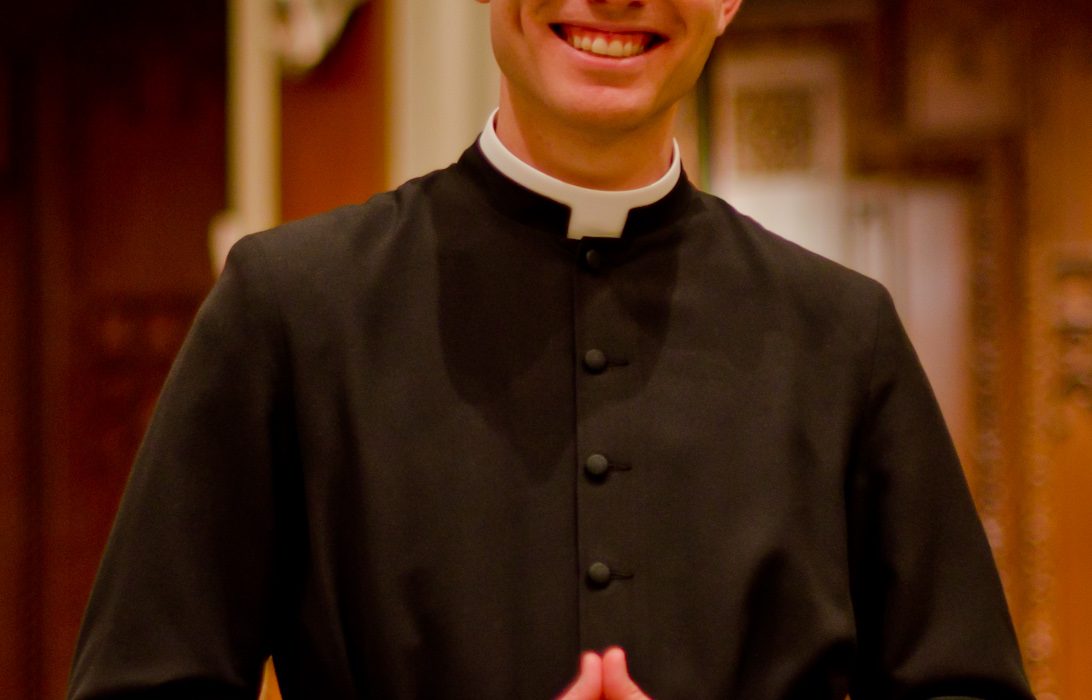 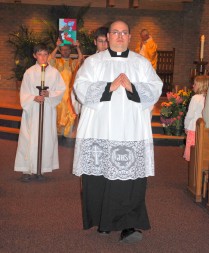 GRANGER — It was not until young adulthood that seminarian Jacob Meyer knew that God was calling him to become a diocesan priest. But along his faith journey, from Holy Cross School in South Bend to altar server at St. Pius X Parish in Granger, Meyer received support and guidance from teachers, priests, parishioners and family that inspired him to pursue a religious vocation that will begin with his ordination into the transitional diaconate on May 14 at St. Matthew Co-Cathedral in South Bend.

Born on May 25, 1984, in Wheaton, Ill., to Julie and Kurt Meyer, Meyer is the oldest of three children. His family’s love and support have been the foundation of his love for the Catholic Church. “Those many nights around the dinner table speaking about religion with my mom, dad, sister and brother, and how important the faith is to our family, helped me understand that I wanted to give my whole life to spreading the Gospel,” he says.

His grandmother Joanne Bauer, a parishioner at St. Pius X, was particularly influential in his faith journey. “When I think about faith, I think of her, praying her rosary in the morning in her chair, always fervently devoted to the Church,” Meyer emphasizes.

When Meyer attended Holy Cross School, his faith support group expanded and his lifelong love of architecture began. “I learned what it meant to be a Catholic. The beautiful church at Holy Cross itself was a source of my love of church architecture. But even more so the priests, religious sisters and my teachers instilled in me the sense of wonder at the mysteries of faith,” he says.

Meyer remembers that his religious teacher, Mrs. Klee, was especially influential in developing his love of the Church. “She taught me so much about the faith and allowed me to lead others to it.”

Between his junior and senior year of high school Meyer visited Germany. “For the first time I experienced the universality of the Church. Here I realized the glory of the holy Church, and remember thinking, what faith these people must have had to build such monuments to the glory of God,” he recalls.

A graduate of Ball State University with a bachelor’s degree in human resource management, Meyer had originally decided on a career in business. But he told his parents a few weeks prior to his graduation that he wanted to pursue a vocation as a Catholic priest.

His mother Julie recalls the moment when Jacob shared this decision. “We were not surprised by his decision to enter seminary. It fits him perfectly. We know that God chooses the person and we feel blessed that He called Jake.”

Meyer’s support group expanded to include college friends. “When I first decided to apply to the seminary I was worried about how my friends would react. My fraternity brothers have continued to be one of my greatest sources of support. They may not always understand, but have always been there for me,” he says.

When Meyer first began looking into the priesthood he considered applying to the Archdiocese of Chicago, but Msgr. Bill Schooler, pastor of St. Pius X Parish, asked Meyer to meet with him before making this important decision.
“All my friends were graduating and moving to the ‘big city’ and I love Chicago, but Msgr. Schooler posed the question: ‘Jacob, where is home for you? And where will home always be?’ The answer of course is here in this diocese and from that point on, I was sold and it was the best decision I ever made,” says Meyer.

“Since then, Msgr. Schooler has been a constant source of support and guidance for me and all the seminarians of our diocese — teaching me, but also letting me get my feet wet in practice around the parish, encouraging in times of success and being merciful when I mess up,” he laughs.

Parishioners from the St. Pius X community also provide another support group for Jacob’s faith journey. “Our parish is really a special place. Being at the seminary and speaking with men from all over the country about their parishes back home I become more and more grateful for this amazing community,” he says, adding, “I love being home at the parish, seeing everyone at Holy Mass, and being a part of the parish community. It gives me a sense of what I am studying for.”
For those interested in discerning a vocation in the priesthood, Meyer offers some reflections.

“You can never go wrong with spending time before our Lord in the Exposed Blessed Sacrament. Ask the Lord to make your vocation clear before you and to enlighten your choices. Also, if there is a desire in your heart, no matter how faint, search it out. Do not try and do it alone.”

He concludes, “All vocations are discerned with the Church. Talk to a priest. Finally, do not be afraid. When I first began the application process to the seminary I was worried about all types of roadblocks I thought would get in the way, and it is amazing how the Lord made each of them disappear.” 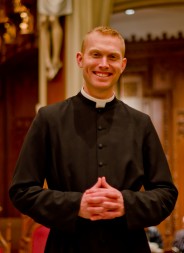 Ben Muhlenkamp, who will be ordained a deacon on May 14, is shown at the Cathedral of the Immaculate Conception on Holy Thursday.

Ben Muhlenkamp to be ordained to diaconate

COLUMBUS, Ohio — “Wasting time with God” is one of Ben Muhlenkamp’s favorite pastimes. The 29-year-old seminarian, who hails from Geneva, will be ordained to the diaconate May 14 at St. Matthew Cathedral in South Bend.
“Taking that hour (every day) where you’re wasting time with God is really important,” Muhlenkamp said between classes at the Pontifical College Josephinum in Columbus, Ohio. “You waste an hour just hanging out. You’d think you lose that hour, but you get that back throughout the day. It really brings strength.”

Just finishing his fifth year at the seminary, the son of Gary and Mary Agnes Muhlenkamp began thinking about the priesthood while still in college at Indiana University-Purdue University at Fort Wayne (IPFW), studying for his bachelor’s degree in organizational leadership and supervision.

“I was working with the youth at St. Vincent’s in Fort Wayne,” he said. “While I was there, I really grew in prayer life with the Lord and started to fall in love with ministry. I saw how great the need was. A lot of these teens needed some direction.

“A thought entered my mind at St. Jude, Fort Wayne, while doing holy hours. As I would go to the adoration chapel to pray for these teens, my thought was ‘Maybe you should go be a priest.’”
While the seed was planted, Muhlenkamp pondered and avoided it at the same time.

“I liked the gal I was dating at the time,” he said.

“I asked him a million questions,” he recalled. “Then I started thinking, ‘Maybe I need to look into this.’

“By October, I thought I’ll go to seminary and, hopefully, in six months they’ll kick me out and I won’t have to worry about it anymore. I would just realize it wasn’t for me. … This thought wouldn’t go away.”
Muhlenkamp has no regrets since he began studying for the priesthood.

“From the moment I talked to the vocation director until now … I had a peace I can’t explain,” he said. “That peace hasn’t gone away. I didn’t have that peace before.”

The young man said while his five years in the seminary have been challenging, they also have gone by fast and he’s learned a lot. Most students take 15 to 18 credit hours per semester, and the coursework has been tougher than at IPFW.
“It astonishes me how often I find people pray for me,” he said. “… Every day, one family prays for me. That’s very humbling.”

Students also pray for each other and attend a formation conference weekly. During this conference, seminarians meet with another priest to discuss issues they will encounter and the need for friendship with other priests as a support.

“We talk about how to pray, how to tell when you’re getting into a bad spot with your prayer,” Muhlenkamp said. “Usually they talk about our spiritual life and how we can become more authentically human. They also look at areas where priests sometimes fail. It might be exercising or not eating healthy, not taking time off and working nonstop.”

At seminary, students also deepen their relationship with Christ.

“People come to learn and fall in love with Jesus,” Muhlenkamp said. “They learn how to live this type of life. I won’t leave here knowing everything; I will learn the rest of my life, but, hopefully, I have grown as a person and can give myself as a gift to others.”

While studying has been good, Muhlenkamp is looking forward to being a deacon.

“It’s time to exercise the ministry I’ve been preparing for for such a long time,” he said. “It’s exciting, but at the same time I’m really starting to feel it’s not my job to be a seminarian all my life; it’s ministering to people.”
Muhlenkamp also sees a deeper meaning behind his role as deacon.

“To be ordained a deacon is to be ordained a servant,” he said. “It’s a ministry of service essentially. … I think that’s very beautiful when I think of a servant. I think of Jesus washing the disciples’ feet. It’s supposed to be a humble service — praying for people to come to know the joy of being a Catholic and helping them see the beauty of the sacraments.

“I get a real fire in my heart to share the beauty of the faith. That’s what excites me and that’s why I’m excited about being ordained a deacon.”

After his May ordination, Muhlenkamp will be placed at a parish in the diocese for the summer and go back to school after that. While attending his last year of classes, he will serve in a parish in Columbus, Ohio.
“God willing, the bishop will call me to the priesthood next June,” Muhlenkamp said.

Muhlenkamp’s family has been supportive of his vocational decision.

“We are just praying he will be a blessing to everyone,” Mary Agnes Muhlenkamp said. “As a mother, you hope for the best for all your children and the Lord will use them as He will.”

“My one sister asked what to buy to have blessed when I become a deacon,” Muhlenkamp said.