“You can win this, Margaret!” were the thoughts of Jonathan Isaac as Margaret Peterson spelled the word “cribbage” during the last minutes of the South Bend Tribune Regional Spelling Bee. Jonathan, a homeschool student who won last year’s regional spelling bee, snapped several pictures of fellow homeschool student and St. Pius parishioner as she, the youngest regional winner, advanced to the National Spelling Bee in Washington D.C.

Ten-year-old Margaret began spelling words like cat, pat, and mat at the age of two. She and her sister Caroline participated in spelling competitions at a young age. “When I was in kindergarten and Caroline was in second grade, we competed in a library spelling bee. I was really excited about it and a couple of years later I participated in a local spelling bee,” says Margaret.

To prepare for the upcoming National Spelling Bee, fourth-grader Margaret is studying suffixes, prefixes and combined word forms. Since first grade she has copied Greek and Latin root words and their derivatives onto note cards as part of her regular school work, and their definitions help her in spelling competitions.

Kate Peterson, Margaret’s mother, notes studying root words came in handy during the regional spelling bee. “Even in the final round she knew the root for bird — ‘ornithos.’ The second place speller got the word ‘ornithoscopy,’ which means bird watching, and Margaret knew immediately that the girl had misspelled it because she knew the root for bird. Margaret had missed the word she was asked to spell before, so she knew she would have another chance to go for the championship.”

In addition to her normal spelling word studies, Margaret found Internet spelling Web sites and the pamphlet and consolidated word lists that the National Spelling Bee recommends to be useful. Between the regional and national spelling bee she practices on average from a half hour to an hour daily.

At the beginning of the regional spelling bee, Margaret was apprehensive. “When I got to the microphone I was worried I would get a word I wouldn’t know and miss the first one. I looked at Mommy for confidence and smiled when I knew a word.” 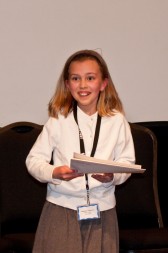 As it was getting closer to the end of the competition she became a little more excited and less nervous. “I did have a goal to be in the top five. So when there were only five kids up there, I knew I had achieved my goal. Then I decided my goal was to be in the top two. When I was in the top two, I thought I want to win this thing!”
The most difficult words for Margaret were those she couldn’t decipher because of their pronunciation. “I was unsure of what vowel to put in when the host said the word ‘parapet.’ I didn’t know whether to put an i, e or a. So I asked for another pronunciation and he said ‘par-a-pet’ and I knew it was an e.”

Her mother’s counsel paid dividends when Margaret was asked to spell the words “monstrance” and “plenary.”

“When ‘monstrance’ and ‘plenary’ came up, I thought either she threw in some extra prayers or somebody up above heard her prayers. When she was asked to spell the word ‘monstrance,’ Waylon (Margaret’s father) got tears in his eyes because he knew she knew that word,” Kate remembers.

The word “plenary” was more challenging Margaret recalls. “I didn’t know whether to put two ‘n’s’ or one so I asked for an alternate pronunciation and he said ‘ple-nary’ so I knew it was with one.”

The competition process at the National Spelling Bee is very complex Kate explains, “At the National Spelling Bee there are about 250 kids who go, and they all take a written test. It is 50 words and they count 25 of them. You don’t know which one counts and which one doesn’t. For every one of the 25 words that they actually score, you get one point. And then they have two different rounds where they spell on stage, but in each of those rounds they only spell one word. So the written test is one day, and the next day she goes on the stage with her group of about 135 spellers.”

She continues, “If Margaret spells her word right it is worth three points and she goes back in the afternoon and spells one word. If she spells that word right she gets another three points. There is a total possible of 31 points. They find out who the top scorers are and they only take 50 kids to the next level.

Margaret is excited about the challenge of the competition whether or not she advances to the finals. “I’m looking forward to the experience at the National Spelling Bee. It is a whole week there, and there is a lot of free time to see the city.”

The National Spelling Bee will be held June 4-6 in Washington D.C.