The phrase “not your father’s school” doesn’t apply to St. Joseph School in Decatur, because for most of the student body, it is indeed their father’s school. And their mother’s, their aunts’ and their uncles’ — even their grandparents’, in some cases. Much of the staff are also second-generation St. Joseph Commodores. It is very much a multigenerational school.

Like his father and aunts and uncles before him, principal Brian Baker studied at St. Joseph prior to teaching there for 16 years. He took over as principal at the start of the 2019-20 school year after serving as assistant principal.

As a college student, Baker was drawn to the idea of teaching. The first school he applied to after graduation was St. Joseph. “I never considered any other school,” he said. “It had that level of comfort.”

St. Joseph is an extension of St. Mary of the Assumption Parish, which sits next door to the school. The school was founded in 1881, a although the current building was completed in 1925. It was first staffed by the Sisters of St. Agnes, and the former convent has been converted into a preschool and daycare wing. 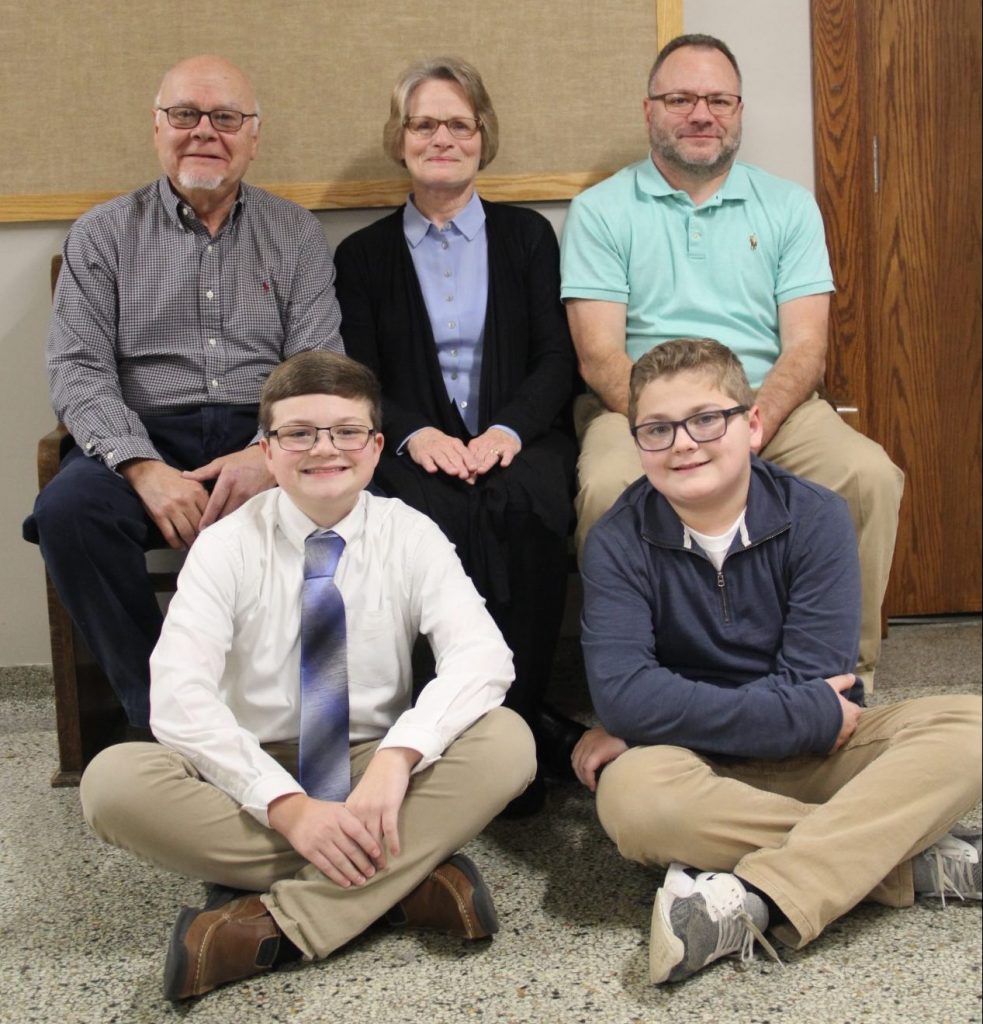 Photos by Jennifer Barton
Three generations of the Meyer family of Decatur represent St. Joseph School: grandparents Harry and Vicki and their son Greg all attended, as well as Derek and Alex, seated in front.

Current enrollment is around 300 students. The school nickname of ‘commodores’ came about because the town was named for Stephen Decatur, Jr., who served as a commodore in the U.S. Navy in the early 1800s. A ship’s wheel is the school’s emblem.

Older alumni say they remember walking the halls from grade school all the way through high school, because both St. Joseph and Decatur Catholic High School once shared the same building. The high school occupied the top floor of the building until its closure in 1967. The old gymnasium in the basement — now humorously known as “the dungeon” — hosted state tournament high school basketball games at one time.

Grandparents Harry and Vicki Meyer spent their school years together at St. Joseph. “I used to chase her down the hallway in second grade,” Harry quipped. Vicki recalled the rope that ran down the middle of the hall, separating the boys from the girls, and a kind but stern nun who served as principal and watched to make sure the students stayed on the right side of it.

The Meyers sent their son Greg to St. Joseph, and he remembers looking up his parents’ grades in the old archives while working at the school. Now his sons, Derek and Alex, attend as well. 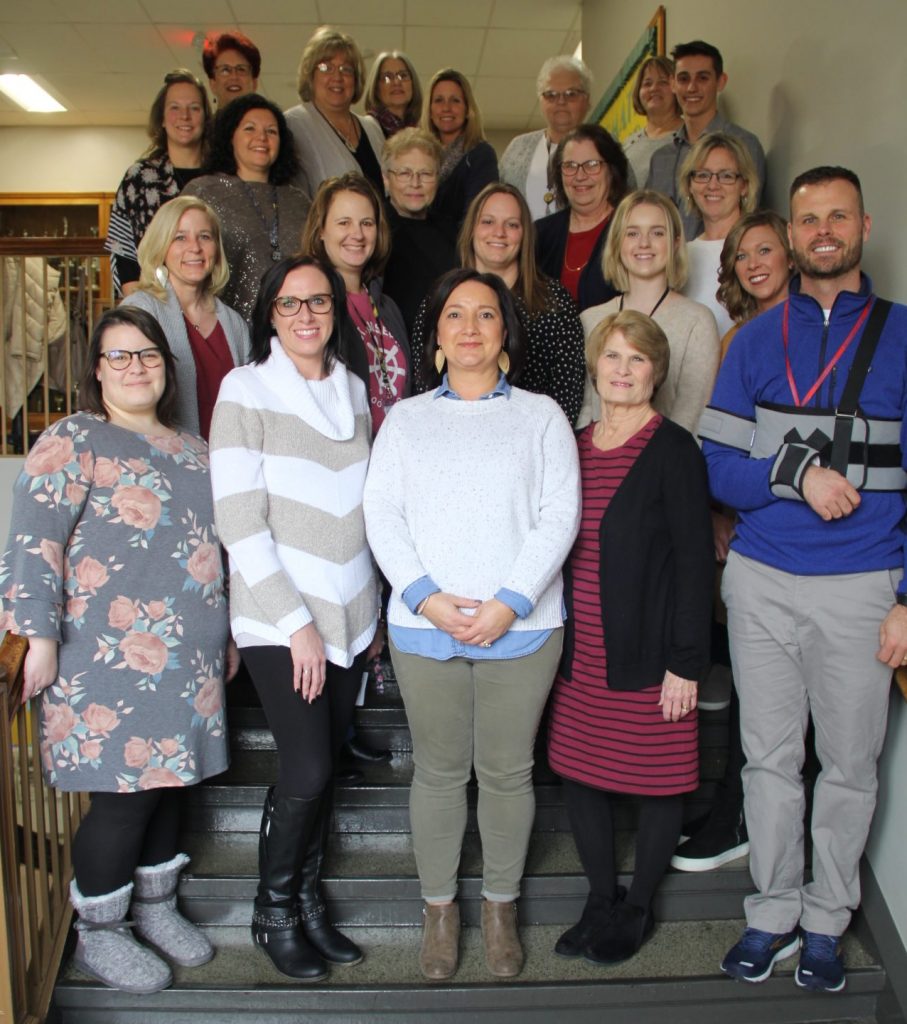 St. Joseph is the kind of place that a secretary can bring her dog to work with her. Jane Beery has been a part of the St. Joseph community for decades: She was one of 11 children, all of whom graduated from the school.

At that time, Beery and her sisters and brothers were proud blue-and-gold pirates, not commodores. She believes the nickname changed when Decatur Catholic closed.

Another teacher, Kathy Foster, began subbing at St. Joseph after graduating from Indiana University-Purdue University Fort Wayne. Before long, she was approached to teach. “Sister Carlita came to me and said, ‘Would you please teach here?’” Forty-two years later, Baker jokes that Foster is trying to set a benchmark for other teachers.

Through the years, Foster has taught many of the teachers currently employed at St. Joseph. Her own children graduated from St. Joseph, and she taught two out of three of them.

“I don’t look at teaching as a career or profession, I look at it as my journey of faith, because that’s what it is,” she said. “It’s more than a profession. It’s a career, but it’s even more than that. Every day is a new challenge, you don’t know what it’s going to bring.”

Although he is one of the youngest teachers at the school, Nick Faurote has a similar story. “I graduated from Purdue and I knew I wanted to come home. By the grace of God, I ended up teaching here.”

A position as a long-term substitute teacher led to a full-time position teaching middle school science. St. Joseph “felt like home right away, like I went from being a student to being an adult. It felt like I hadn’t left that atmosphere. Coming in and teaching, I make a good rapport with the kids and try to keep a positive attitude every day.”

Faurote is now in his fourth year as a teacher. It was initially an adjustment for him to call his former teachers by their first names, he said.

In his first year his youngest sister began middle school, so he was able to teach her for three years. Additionally, some of his friends from grade school are beginning to bring their children to St. Joseph, and Faurote looks forward to working with them. He is also adamant that his future children will one day walk the same halls as he did.

Although the three-story structure is the same physical building that past generations of St. Joseph students remember, Baker points out recent updates. The school has installed a lift that can get about 90% of students and visitors with disabilities or injuries onto all three floors. The daycare, which began as a means to provide teachers with a place for their younger children, has expanded to accept students from the general public and is now open year-round, meeting a need for working parents.

St. Joseph also boasts a new, freestanding gymnasium located across the street. There is updated technology in all the classrooms.

“For Decatur, to keep this school going is a priority. Not only for former students, but parishioners, and we have non-Catholics who see (the value of the school),” said Baker. He relates how a family came to visit the school not too long ago based on the impression of it they were given by their older children’s friends, who attend St. Joseph. “It’s another feather in not only our caps, but in that of the parents of those students and the students themselves; they’ve taken what they learned here and applied it to high school life, with all the pressures that comes along with that.”

It’s obvious that Baker, along with the teachers, staff and families of St. Joseph School, are proud of their school and its rich history. “The school is so much bigger than any one person. Hopefully we can — and did — make an impact on the next generation, that they can continue to value what we provide here.”