A request by Bishop Kevin C. Rhoades to the U.S. Province of the Congregation of the Holy Cross has resulted in a loan to Diocesan Museum, Fort Wayne, of several never-before-exhibited items used by former Diocese of Fort Wayne-South Bend bishops.

Notable among the historic pieces is a mitre once used by Bishop John H. Luers, first bishop of the diocese. The mitre, which is a bishop’s headgear worn during certain liturgies, is embroidered with the detailed image of a pelican striking its breast to draw blood — a symbol for Jesus and the Eucharist. 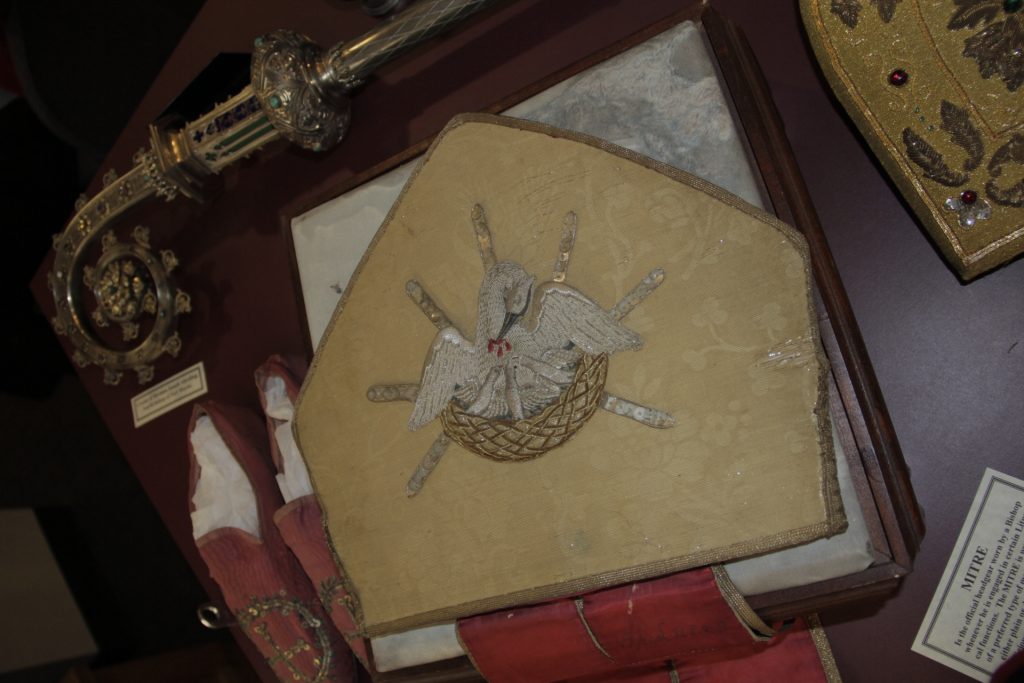 In times of drought or food scarcity, if a mother pelican is unable to find food for her chicks, she will use her beak to poke holes in her breast, causing blood to run out that will nourish them. The mother dies and the chicks survive, imagery that reminds Christians of Jesus’ love and His great sacrifice.

Bishop Luers’ red cloth buskins accompany the mitre. The two items are the only belongings of the first shepherd of the diocese to ever be displayed by the museum. 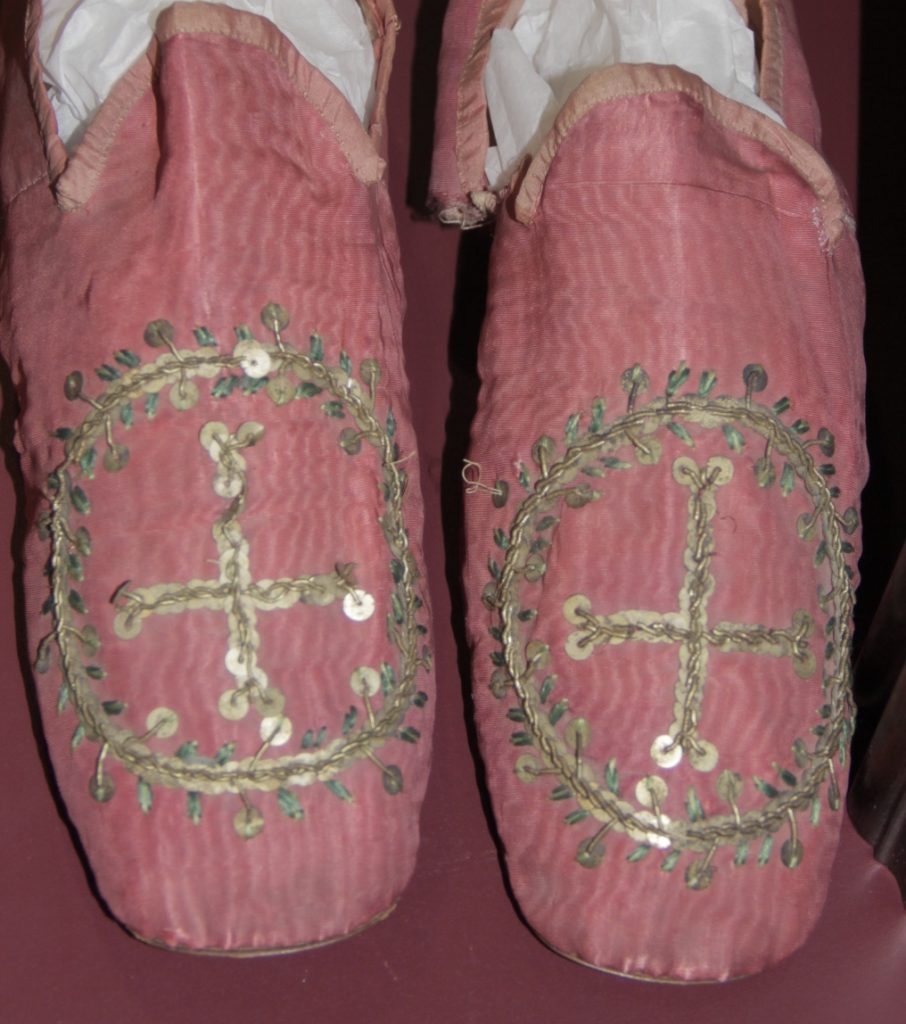 Buskins, also called pontifical shoes and sometimes referred to as sandals or slippers, are ceremonial footwear formerly worn by a bishop when offering what was called a “pontifical Mass” prior to the Second Vatican Council. Their hue varied according to the liturgical color of the given day.

Although it’s not certain, it is possible that the buskins and mitre were the same ones given to Bishop Luers on the day of his ordination as bishop of what was then known as the Diocese of Fort Wayne. According to “Worthy of the Gospel of Christ,” a history of the diocese written by Joseph M. White on the occasion of its 150th anniversary: “… diocesan life in an active sense began in Cincinnati’s graceful St. Peter in Chains Cathedral on January 10, 1858, as Archbishop John B. Purcell — with Bishops Maurice de St. Palais of Vincennes and George Carrell, S.J., of Covington assisting — presided at the episcopal ordination of his young protégé, John Henry Luers, as first bishop of Fort Wayne. The elaborate ordination liturgy included the cathedral choir’s rendition of a Haydn Mass …. Julian Benoit, vicar general, and Joseph Weutz, pastor of St. Mary’s, Fort Wayne, represented the new diocese. In the evening, at nearby St. Joseph Church, Luers’ parishioners hosted a reception for their longtime pastor. On this occasion, they presented him with a mitre, crosier, pectoral cross, bishop’s cassock, ambry with episcopal seal, three pairs of pontifical shoes, and $1,200.”

Bishop Luers’ mitre and slippers will be shared with the students of his namesake high school in Fort Wayne Jan. 15, when Bishop Kevin C. Rhoades makes a pastoral visit to the school. 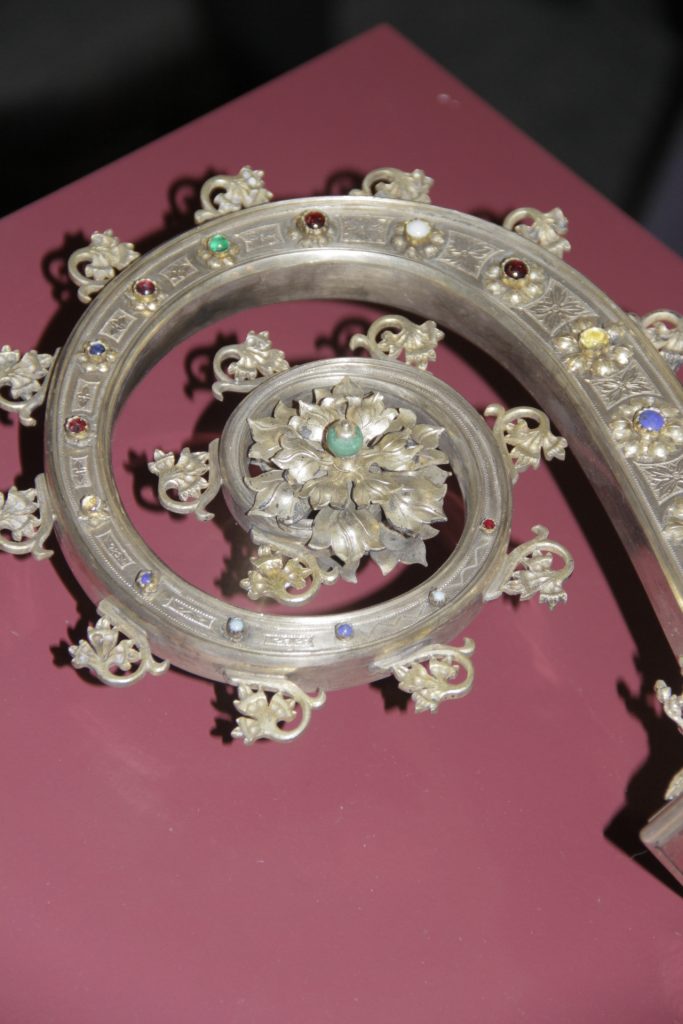 The buskins of two other former bishops, Joseph G. Dwenger, second bishop of the diocese, and Joseph Rademacher, its third bishop, keep companionship with those of Bishop Luers in the temporary display. Another treasured item is an ornate, jewel-decorated crosier, or staff, belonging to Bishop Herman J. Alerding, the fourth bishop of Fort Wayne.

Alerding served as bishop of the diocese from 1900 to 1924, a period of time during which the United States, including northern Indiana experienced, according to White, “a high tide of European immigration, with northern Indiana receiving a substantial share — especially Catholics from southern and eastern Europe.” The newcomers, White continues, greatly expanded the Catholic presence from South Bend to Fort Wayne, “resulting in the founding of more Catholic churches and schools.” 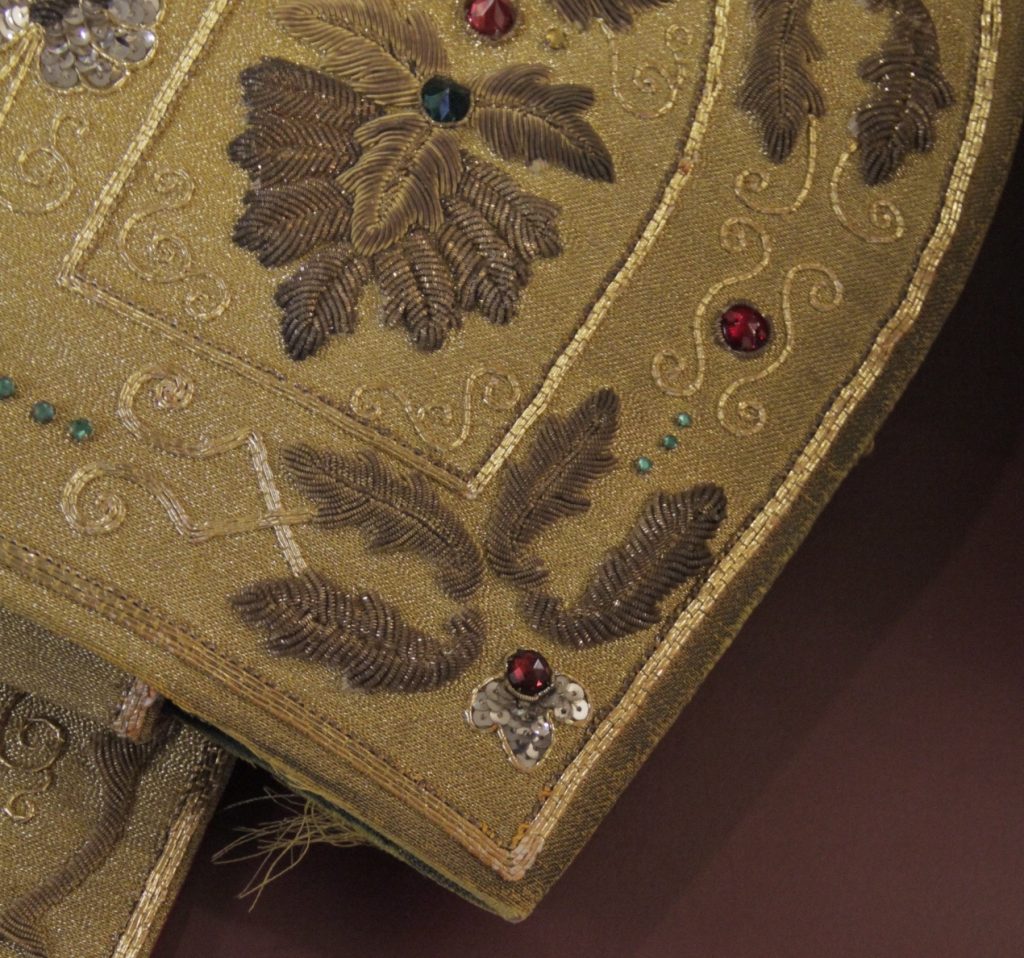 Accompanying the pelican mitre used by Bishop Luers is a precious mitre, so called due to a design that incorporates inlaid precious stones, or jewels. It was used by the fifth bishop of the diocese, Archbishop John Francis Noll. The precious mitre and several other episcopal items owned by the diocese and used by various bishops, including Bishop Leo Pursley, round out the special exhibit.

In another area of the museum, now through Jan. 6, the viewing of a large, carved creche, painted with rich color, may lend peace to the Advent and Christmas seasons. After the creche is taken down, examples of some of the beautiful and historic eucharistic canopies used within the diocese at events such as Corpus Christi processions, will be erected.

The special exhibit of items from Bishops Luers, Dwenger, Alerding and Rademacher will be on display at the museum for four years, until 2024. Diocesan Museum is located next door to the Cathedral of the Immaculate Conception at 1103 S. Calhoun St. in Fort Wayne. Hours are 10 a.m.-2 p.m. Tuesday through Saturday. Admission and parking are free. The museum is handicapped-accessible.