The Solemnity of St. Joseph takes place on March 19. The saint’s role as historical figure and cornerstone to the Christian religion – and more importantly as earthly father to the Lord Jesus Christ – has provided a 2,000-year legacy of inspiration to believers around the world. His impact is especially profound in the Diocese of Fort Wayne-South Bend.

In this diocese alone, there are a total of 14 parishes and schools that attribute their names to St. Joseph – eight parishes and six schools, including one high school. A large Catholic health care system in South Bend bears the saint’s name, and a former hospital in Fort Wayne was named after him.

The 206-mile-long St. Joseph River that flows out of Lake Michigan spends many of those miles in northern Indiana, running along many diocesan towns. Another St. Joseph River measures about 86 miles, with a little more than half of its watershed stretching into the northeastern part of Hoosier territory. There are six roads named after the saint in Fort Wayne and South Bend alone. But St. Joseph’s influence within the diocese reaches further than patronage and geographic namesakes.

The Congregation of Holy Cross makes its home at the University of Notre Dame campus. This order is where a young novitiate from Quebec by the name of Alfred Bessette began his long journey of service to the Catholic Church just two days after the Christmas holiday in 1870.

Adopting the name André after his childhood pastor, he became the doorkeeper for Notre Dame College in Montréal, where he imitated the fatherly love St. Joseph fostered for Christ. He cared for the needs of others in addition to welcoming them through the doors. It would not be long before Brother André’s devotion to St. Joseph would sprout into one of the most recognizable characteristics of his life and following sainthood. His feast day is January 6 in the U.S. and January 7 in Canada.

Andrew Ouellette, Director of Campus Ministry at Holy Cross College in Notre Dame, recounted the notoriety that St. André Bessette brought to the order. Ouellette said that St. André was “the first canonized saint in the Congregation of Holy Cross. Many people claim to have been cured physically and spiritually through his prayers,” he continued, adding that approximately one million people viewed his coffin upon the saint’s passing in 1937. It was also through St. André’s intercessory prayers to St. Joseph that many claim to have been healed.

St. André’s admiration of St. Joseph was initially fostered in a catechism class, explained Ouellette. St. Joseph was “a powerful intercessor before God” to André. “He recommended all who met him to have recourse to St. Joseph and to foster a true devotion to this great patriarch,” continued Ouellette. Taken from Genesis 41:55, St. André’s motto, “Ite ad Joseph,” means “Go to Joseph,” which initially described the Joseph in the Old Testament, but has since been adapted to mean the Joseph of the New Testament, husband to Mary, mother of God.

St. André’s devotion to St. Joseph went much deeper than just his admiration for his holiness and faith – it was a matter of character. “Both were men of deep humility, quiet in disposition, but strong in devotion,” Ouellette said. In fact, just as Joseph is prominent for remaining silent but obedient to the Lord throughout the Gospel, St. André took a similar role in his routine responsibilities as launderer, sacristan and porter as a lay brother in the Congregation. Actions often speak louder than words; the modest and kind character that the two saints shared was heavily rooted in service. 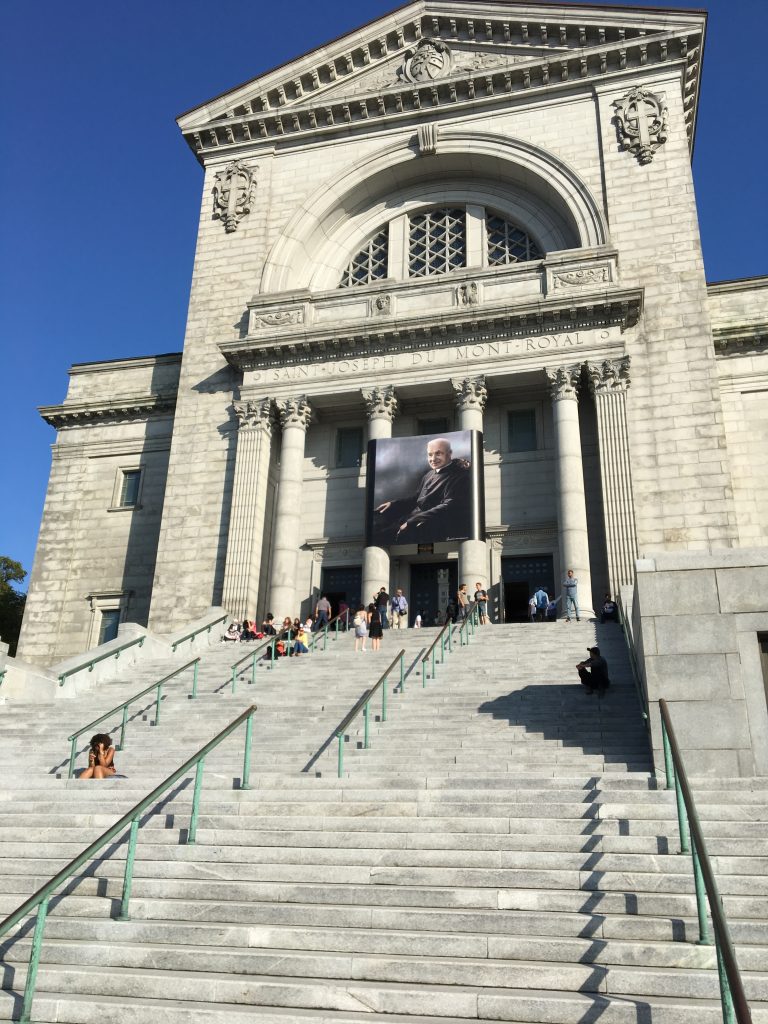 Photos by Jodi Marlin
Saint Joseph’s Oratory of Mount Royal in Montréal, Quebec in Canada welcomes the arrival of pilgrims as they pray under an image of St. André Bessette that hangs above the oratory’s steps.

In an effort to pray like St. André and thereby honor St. Joseph, Saint Joseph’s Oratory of Mount Royal located in Montréal, Quebec in Canada is offering a nine-day sermon series on the theme: “St. Joseph, Mainstay of Families.” Dr. Barthélémy K. Defo, Deacon Robin Cheung and Deacon François Picotte will each preach for three consecutive days on different topics relating to St. Joseph and his role in the Holy Family. English broadcasts will take place daily at 12:30 p.m. from March 10 to March 18, with the exception of the March 13 broadcast occurring at 11:15 a.m. A Mass celebrating the Solemnity itself will be broadcast in English at 12:30 p.m. on March 19. 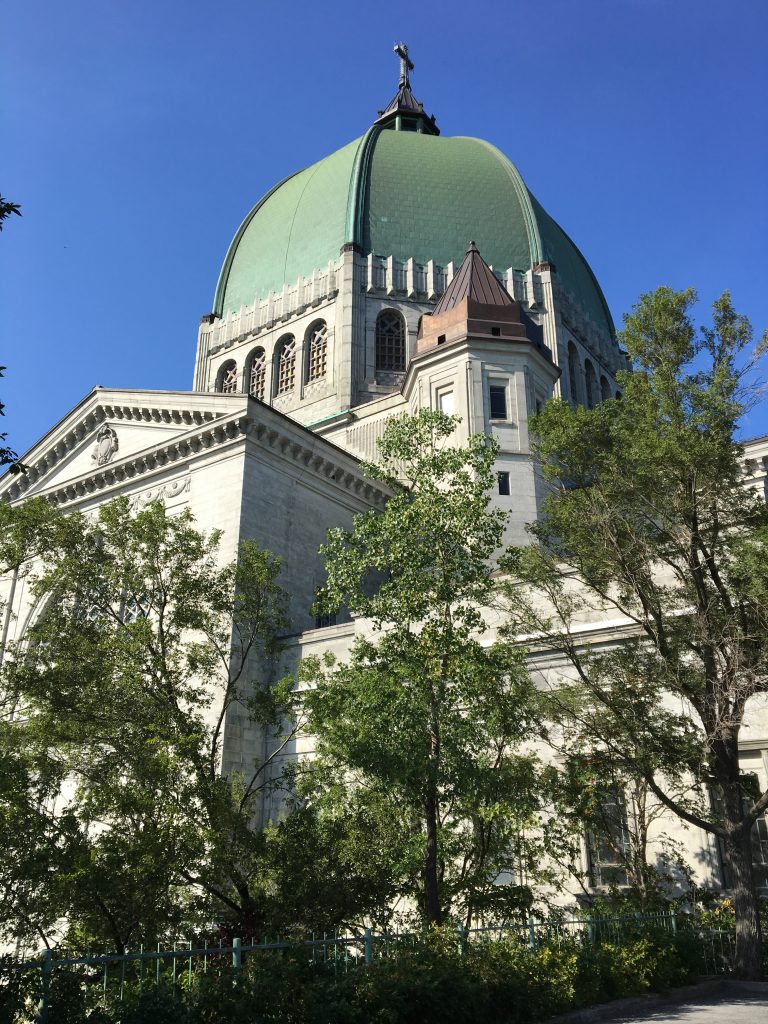 This is the exact oratory where students from Holy Cross College, as well as from the University of Notre Dame and Saint Mary’s College, have journeyed on pilgrimage in the past. “The idea for an oratory in honor of St. Joseph came from St. André himself,” stated Ouellette, and the oratory’s website confirms St. André as its founder. Known as one of the biggest churches in the continent, the oratory provides vast opportunities for those seeking to quite literally “Ite ad Joseph.” The COVID-19 pandemic halted pilgrimages from the Notre Dame campus, but Ouellette expressed his desire for the journey to resume soon.

Following the St. Joseph River and finishing along the East Bank Trail, Father Chris Lapp will head the procession at 9 a.m. At the end of the route, a prayer service will begin at noon and food will be available at affordable prices. There will also be free shuttle service leading back to the beginning. There are several spots along the journey for pilgrims to join in if they cannot complete the entire trek. Registration is requested.

For more information regarding the Saint Joseph’s Oratory, including its English broadcasting services through Facebook and YouTube, visit saint-joseph.org. For more information on the diocese’s Way of St. Joseph Pilgrimage, visit diocesefwsb.org/joseph-pilgrimage.