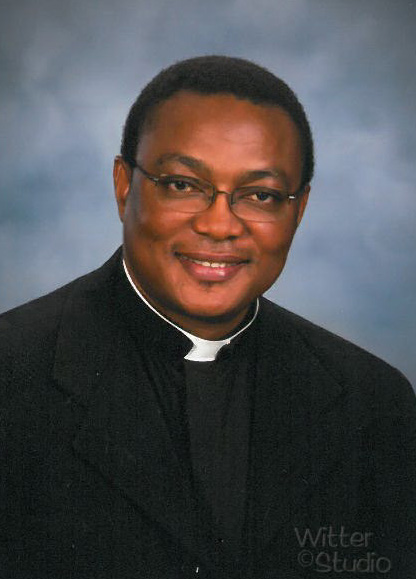 Father Michael Chukwudi Mbonu remembers very vividly what he calls “the happiest day of his life” day 25 years ago. It was July 15, 1995, a “beautiful Saturday” in the Onitsha archdiocese of Nigeria, when Father Mbonu was ordained with 24 of his classmates. “My family, the townspeople came in great numbers,” Father Mbonu recalled.

The cathedral was full and canopies were set up outside for those who came to witness the ordination. When the bishop called his name, Father Mbonu came to kneel before him and heard everyone applaud. Thus began a priestly life that spans two continents and many different assignments.

Father Mbonu is from the town of Awka-Etiti, Anambra state, in Nigeria. After serving a year at Holy Trinity Cathedral (now basilica) in Onitsha, he served at various parishes and parochial schools in Nigeria. A request from Bishop Edward Braxton, former bishop of the Diocese of Belleville, Illinois, who visited his archdiocese, led to Father Mbonu’s move to the United States.

He felt a “very warm welcome at all the parishes” in the Diocese of Belleville, Father Mbonu said. He was so well-liked and needed that Bishop Braxton pleaded with him to remain beyond his three-year contract. He ended up serving seven years before given a choice of ministries in which to serve in the future. He chose to go into hospital chaplaincy.

Father Mbonu’s first and only choice to complete his clinical pastoral education residency was Saint Joseph Health System in South Bend. He applied and was accepted.

“Residency is very involved and demanding,” Father Mbonu said. After that residency, he was hired on as chaplain, and his bishop allowed him to remain in the Diocese of Fort Wayne-South Bend.

“It is the joy of my life; I love to serve … The demographic might be different, but the ministry is the same.”

The call to the priesthood came at a young age for Father Mbonu. Growing up, he was the youngest of nine children. While home during a break from school one year, his older sister, who was discerning religious life, asked him to attend morning Mass with her.

While she could have chosen siblings closer to her own age to walk the mile to church with her for the 6 o’clock morning Mass, Father Mbonu felt God at work in his life through her invitation. “I look back and see the hand of God, how I was drawn into contemplating becoming a priest.”

At Mass, Father Mbonu began to watch the servers, who were young teenage boys like himself. This motivated him to become an altar server.

“This was something I cherished. Even when my sister was not at home, I went by myself.”

A particular peace came into his heart, and he was greatly inspired by watching the priests during Mass — so inspired, in fact that he entered seminary at age 14. “I was captured. I had a burning desire for more of that.” He made sure he did well on his entrance exams so that he would be allowed to enter the seminary at such a young age.

Although Father Mbonu looks back with great fondness on all the assignments he has had, one experience stands out. It is the dedication of the last parish he served in his homeland.

Throughout a construction process at the parish, he was deeply involved in all aspects. During this time he found out he would be sent to the United States. He greatly wanted to dedicate the church before he left. The community worked hard and was able to have it ready for dedication only months before Father Mbonu would leave for Illinois.

The ceremony was a very large and meaningful affair. “It was the highest point of my life, besides ordination.”

Looking to the future, he remains joyful in his priesthood.

“Wherever I’m planted I try to give my best, to bloom.”