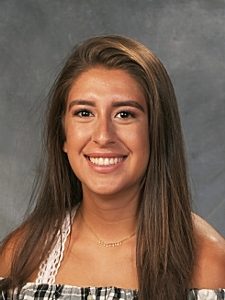 Life consists of mainly faith, soccer and school for Saint Joseph High School salutatorian Isabel Ortiz. She and her family moved to Indiana when she was in fifth grade, at which point her parents decided to enroll her in Catholic school instead of the public schools she had formerly attended. This made a strong impact on Isabel and the impression she had of the difference between the two.

“My experience in a Catholic grade school is what helped me make the decision to attend St. Joe and continue learning in an environment rooted in faith. It has been such a blessing to attend a Catholic high school, because it allowed me to grow in so many ways during my four years — not only as a student, but as a person.”

In addition to personal growth, Ortiz believes her exposure to ongoing faith formation throughout high school has provided her with opportunities for service she would not otherwise have had. This passion for service has led her to become involved with several clubs and sports during her four years at Saint Joseph, including soccer for four years, a two-year membership in both National Honor Society and Spanish Honor Society, serving as a peer mentor and a member of the board of peer mentors and participating in student government as a Junior Class representative and student body vice president. Ortiz was also on a mock trial team for three years, serving as captain junior year; she helped coach a freshman mock trial team senior year and was a student ambassador for three years. Outside of school she volunteered as a leader at Reins of Life, a local nonprofit that provides therapeutic horse rides for children and adults with disabilities and just recently began volunteering in the intensive care unit at Memorial Hospital. She attended two week-long mission trips with her youth group at St. Joseph Church and played club soccer for about eight years.

Some of Ortiz’s most valued memories of her high school experience involve soccer, mainly because the team went to the state championship during her junior and senior years. Despite losses both times, Ortiz said she forged incredible bonds with her teammates, who became her friends, as well as with others she met while traveling.

“I’ve made friends I will have for the rest of my life, and I am so grateful to have had the opportunity to play with such an amazing group of people. Whether it be running jog-sprint-jogs on hot summer days or huddling up together at half-time during cold October games, I wouldn’t trade my four years at Saint Joseph High School for anything.”

Ortiz plans to attend the University of Notre Dame this fall and hopes to major in pre-health to possibly pursue a medical degree.