WASHINGTON (CNS) — The internet facilitates sexual exploitation, a category of child abuse, according to experts in this field interviewed by Catholic News Service.

The internet also, they say, enables near universal access to violent pornography, with a range of negative implications, including normalizing sexual aggression and the dramatic increase in children abusing other children.

In a recent report on the role of technology in sex trafficking, as reported by the Justice Department’s Domestic Minor Sex Trafficking studies and based on interviews with 260 survivors, Vanessa Bouche, a political science professor at Texas Christian University, found the internet facilitated prostitution, through online ads, in 75 percent of the cases.

According to Mary Anne Layden, director of the sexual trauma and psychopathology program in the University of Pennsylvania’s Department of Psychiatry, our society is at the point of “almost universal exposure” of children to pornography, which gives them “massive mis-education about intimacy and sexuality.”

Children “learn that sex is non-intimate, violent, adversarial, that it is non-relational, it is degrading and it is narcissistic,” she told CNS. “Almost 90 percent of pornography coded by researchers is violent, so boys are being taught: Women like to be forced, women like to be raped, fisted, choked, gagged and slapped.”

Women are depicted as enjoying, or having a neutral response, to maltreatment.

“Everything pornography says is a lie, but it is a massively effective teaching tool — of toxic learning,” Layden explained.

The U.S. Catholic bishops addressed these harmful effects on children in their 2015 pastoral letter on pornography, “Create in Me a Clean Heart.”

“Being exposed to pornography can be traumatic for children and youth. Seeing it steals their innocence and gives them a distorted image of sexuality, relationships, and men and women, which may then affect their behavior,” they wrote. “It can also make them more vulnerable to being sexually abused, since their understanding of appropriate behavior can be damaged.” 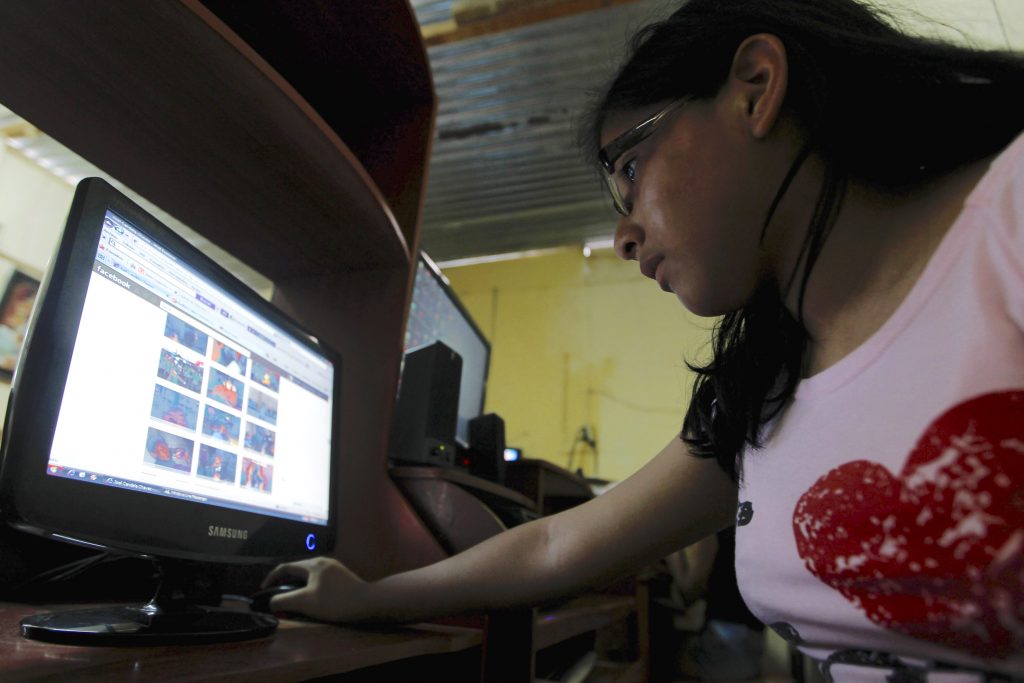 One result of exposure to this violence of pornography is an “explosive” increase in children who are assaulting other children.

Layden said it is more likely for a daughter to be assaulted by her brother than by her stepfather in a “blended” household.

Dawn Hawkins concurs with Layden. Hawkins is senior vice president and executive director of the National Center on Sexual Exploitation, or NCOSE, known as Morality in Media until 2015.

Hawkins said there’s little data, for one reason, in school settings sexual abuse between children is not reported, but the damage to victims is real.

The lawyer for an 8-year-old girl raped multiple times by a 13-year-old male neighbor consulted NCOSE recently. The boy — a consumer of violent pornography — had lined up his younger siblings, and the victim’s sibling, to serve as an audience for his illicit performance.

“So the trauma experienced by that group of children, caused by an immature brain’s exposure to pornography, could take years, even decades, to unravel,” she added.

Hawkins recommends the website Protect Young Minds, protectyoungminds.org, for guidance on inoculating them from harmful imagery online. Another such site is www.faithandsafety.org, created by the U.S. Conference of Catholic Bishops’ Department of Communications and the Greek Orthodox Archdiocese of America.

A data set released Nov. 30 by Children’s Mercy Hospital in Kansas City, Missouri, found that in almost half of its 2017 child abuse cases, boys ages 11 to 15 years were the perpetrators, physically and sexually attacking girls ages 4 to 8 years old. Nurses traced the phenomena to exposure to pornography.

One potentially positive note in the disturbing trend regarding peer assault is that, unlike adult perpetrators, young offenders who receive treatment do not appear to re-offend into adulthood.

“The good news on treatment means we need mandatory reporting of these cases, so kids get help,” observed NCOSE’s Hawkins.

She also is excited that after “many meetings” with Google, the internet giant has quietly added a “safe search” feature, allowing a setting that automatically screens out graphic sexual imagery from popping up.

Private companies as well are beginning to respond to evidence of the harmful impacts of pornography and to federal law enforcement crackdowns on it.

The social networking site Tumblr, now owned by Verizon, announced in early December it would block all pornography and “adult content” from its site beginning Dec. 17, as a result of child pornography — a federal crime treated with great severity— getting past its filters.

And Starbucks announced it will block customers from perusing pornography while on the store’s free Wi-Fi, as a result of pressure from the South Carolina-based advocacy group Enough is Enough.

Some of these changes are a result of consumer pressure, according to Hawkins.

“The general public is becoming more aware of the public health harm,” she told CNS. “Parents are concerned about the harm to their young kids.”

She added, “There is a connection between pornography and violence against women. … The general public is becoming aware of this and demanding an end to the violence and sexual abuse of children.”

Hawkins also cited 40 peer-reviewed studies since 2001 that stated the detrimental impacts of pornography. “There is much more widespread awareness of the harms, which have been swept under the rug and not talked about,” she said.

Mark Pattison contributed to this story.