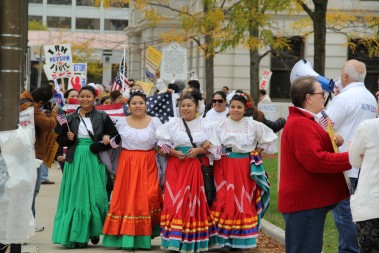 Parishioners dressed in ethnic clothes from St. Patrick Parish in Fort Wayne were among the 350 people who attended a vigil for immigration reform on Sunday, Oct. 20, at the Allen County Courthouse. Vigil participants were encouraged to contact the U.S. House of Representatives to schedule a vote for comprehensive immigration reform. The U.S. Senate passed the Senate Bill 744, which received bipartisan support. The vigil called for House Speaker John Boehner (R-Ohio) and Rep. Marlin Stutzman (R-3) to place and support the bill. The U.S. Conference of Catholic Bishops has addressed the issue with a plan for comprehensive immigration reform.

FORT WAYNE — Many gathered outside the Allen County Courthouse on Sunday afternoon, Oct. 20, for a call to the U.S. House of Representatives to schedule a vote for comprehensive immigration reform. The peaceful inter-faith vigil drew a crowd of over 350 who carried signs with the Statue of Liberty, held the American flag and chanted for immigration reform now.

“This vigil is to support comprehensive immigration reform in line with the Senate Bill 744 approved by the U.S. Senate this past June,” shared Dr. Max U. Montesino, president of the Hispanic Leadership Coalition of Northeast Indiana, which organized the vigil. Montesino also served as the vigil’s moderator.

“(The vigil’s) objective is to call the House of Representatives in Washington to schedule a vote for immigration reform before the end of this legislative session in December,” Montesino reported.

Vigil participants were encouraged to ask the House of Representatives — particularly House Speaker John Boehner (R-Ohio) and Rep. Marlin Stutzman (R-3) — to approve legislation that emphasizes family unity, a path to legalization and earned citizenship for undocumented workers, a revamping of employment-related visas, rational border security measures, and the alignment of the enforcement of immigration laws with humanitarian values. The U.S. Conference of Catholic Bishops has voiced a similar program that contains those elements.

Parishioners from St. Patrick Parish, Fort Wayne, were well represented at the vigil.

Divine Word Missionary Father Andrew Thu Pham, the pastor of St. Patrick Church, Fort Wayne, who came to the U.S. from South Vietnam in 1983 at the age of 14, was among the 15-plus speakers who spoke at the vigil.

“I came here just like any one of us,” he told those gathered.

“This country is the country of freedom where I can become a Catholic priest,” he emphasized. “I am a Vietnamese-American. I can vote, and I support immigration reform.”

Enid Roman-DeJesus of the diocesan Hispanic Ministry Office, told Today’s Catholic it was good that there were many speakers at the vigil from different cultures and religions, because “immigration reform is not just for Hispanics.” This affects many cultures “that are here to live the American dream … and to be part of this great nation.”
Tena Dellaca-Hedrick, social justice program coordinator at the Victory Noll Center in Huntington, herself an immigrant from Australia, spoke of myths about immigrants. Many believe the highest immigration population is Hispanic and that most of them are illegal, but Dellaca-Hedrick countered, “the statistic is that only 30 percent of immigrants that came in 2012 were actually Hispanic and 38 percent were Asian descent.” She also noted that 75 percent of immigrants come to the U.S. legally.

Dellaca-Hedrick referred to a statistic that shows in the next 20 years, “there will be $500 billion contributed to our economic system by immigrant-entrepreneurs.”

She addressed the belief that immigrants are taking American jobs. Often it is the undocumented immigrants who take the jobs Americans won’t take, she noted.

“Most of all,” she said, “I think it is important to remember, that there is no American — no matter who they are — that is not a descendent of an immigrant whether they are first generation or 20th generation.”