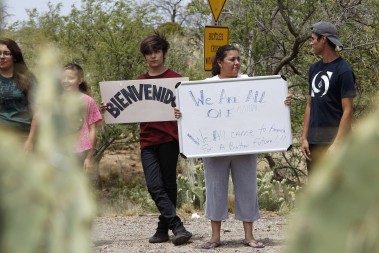 Amelia Martinez holds up a sign as she and members of her family gather July 15 in support of undocumented immigrants in Oracle, Ariz. Dozens in the small community are donating their time, talent and treasure to make sure children fleeing danger in their home countries are welcomed and supported.

America is facing a humanitarian crisis: tens of thousands of children coming to the United States unaccompanied by a parent or guardian, a majority from El Salvador, Honduras, and Guatemala, where violence has permeated the fabric of their communities. They come here to escape desperate circumstances. They have faced new perils every step along the way.

It is important to understand the root causes of this crisis, why these children are coming to the United States. Violence and poverty in their home communities has made life all but impossible. Gangs rule in many places and recruit children. They terrorize students and teachers in schools. They control whole neighborhoods, outnumbering the police. Many young people and their parents live in constant fear.

Honduras has the highest homicide rate in the world. El Salvador and Guatemala have the 4th and 5th highest murder rate in the world. Drug cartels have strengthened their hold on these countries as shipping routes for drugs to Mexico and the United States. Children are specifically targeted to join gangs and are threatened with death or rape or both. The governments of these countries are increasingly unable to protect these children and their citizens.

Many Americans are concerned about the violation of our immigration laws. I urge you not to look at these children through an enforcement lens, but through a child protection lens. In fact, a number of these children could qualify for refugee protection, consistent with U.S. and international law. Most importantly, I urge you to look at this issue through the lens of the Gospel, with the eyes of faith, faith in the One who said: I was a stranger and you welcomed me (Matthew 25:35) and who also said: Whoever receives a child such as this in my name receives me (Matthew 18:5).

This issue is not just a political one. It is a moral one. Sadly, there has been a lot of political posturing regarding this issue, forgetting or ignoring the fact that this issue involves at-risk children! Our Holy Father, Pope Francis, has called for the care and protection of these children. In a recent letter, he wrote: “Such an humanitarian emergency demands as its first measure the urgent protection and properly taking in of the children.” The Holy Father also said that the root causes of their flight should be addressed, such as violence and endemic poverty.

I was thinking recently about the refugees taken in by other nations, such as Lebanon and Jordan, which each host one million Syrian refugees. We have 60,000 children who have entered our country since October, the majority of whom could qualify for international protection as refugees. It would be morally wrong to send them back to their home countries without due process, without the chance to go before an immigration judge. God forbid that they be forced to return to possible harm or even death at the hands of gangs and criminal networks! We need to protect these children who, without protection, are vulnerable to trafficking, kidnapping, extortion and other abuses.

The Catholic Church continues to be at the forefront in efforts to help these children. Catholic Relief Services is working on behalf of these vulnerable children in tough neighborhoods in Central America. Catholic Charities USA is engaged in activities both at the national and local level responding to the needs of the thousands of children coming to the United States, working with government agencies to find shelter for the children, finding bilingual volunteers and certified social workers. Migration and Refugee Services (a department of the United States Conference of Catholic Bishops) is providing community-based services to support the reunification of unaccompanied children with their family members in the United States. This program serves as an alternative to detention, allowing children to live with their families while they undergo immigration proceedings. USCCB/MRS also provides community-based residential services to unaccompanied refugee and immigrant children through its network of 12 Unaccompanied Refugee Minor foster care programs.

Many have asked me how they can help these children. Of course, we must keep them in our prayers. We can provide donations to Catholic Relief Services, Catholic Charities, or the USCCB Migration and Refugee Services. Our own diocesan Catholic Charities is looking at the possibility of how we can help with caring for these children. I also invite you to contact our elected representatives in Washington, urging them to protect these children. We need to strengthen protections for unaccompanied, migrating children, focusing on the best interest of the children. We must continue to advocate for family reunification as an essential part of immigration reform. Resettlement in the United States should be allowed for those who cannot return safely to their countries of origin. And we should assist the Central American countries in protecting their own children from violence, gangs, and other criminal organizations, the root causes of their migration north.

We must not look at these unaccompanied minors as mere numbers or statistics. These are real children, human beings created in the image and likeness of God. They are our young brothers and sisters in Christ. They are children of God and must be treated with dignity and respect, care and compassion.