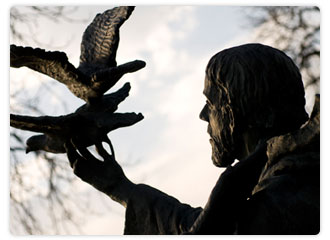 The influence of St. Francis of Assisi, whose feast day is Oct. 4, prevails throughout the Diocese of Fort Wayne-South Bend. The following list reveals the impact of the Franciscan spirit of loving service:

The provincialate of the Sisters of Saint Francis of Perpetual Adoration is located in Mishawaka. www.ssfpa.org.

• The University of Saint Francis is located in Fort Wayne and conducted by the Sisters of St. Francis of Perpetual Adoration. Visit www.sf.edu for more information.

Franciscan Sisters of the Sacred Heart

The Franciscan Sisters of the Sacred Heart, from Frankfort, Ill., have convents at St. Charles Borromeo in Fort Wayne and Provena Sacred Heart Home in Avilla.

The Franciscan Sisters Minor, with their convent at Providence House at St. John the Baptist Parish, Fort Wayne, serve the Fort Wayne area.

The Sisters of St. Francis of Mary Immaculate serve at the University of Notre Dame.

Sisters of St. Joseph of the Third Order of St. Francis

The Sisters of St. Joseph of the Third Order of St. Francis, based at Steven’s Point, Wis., serve in South Bend and Fort Wayne.

The Order of Franciscan Brothers Minor is located at Our Lady of the Angels friary on the former St. Andrew Church grounds in Fort Wayne.

The Order of Friars Minor have a friary and convent in Mishawaka.

• Conventual Franciscan Friars have their novitiate in Mishawaka. www.franciscandiscipleship.org

Father Ron Rieder, of the Order of Friars Minor Capuchin, is pastor of Ss. Peter and Paul Parish in Huntington. Capuchin Father Augustine
Kochuparathanathu assists. The order once operated the St. Felix Seminary in Huntington, which is now being renovated and was the home of Venerable Father Solanus Casey.

Priests of the Order of Friars Minor Conventual who serve at parishes in the diocese include the following: Father Andrew Martinez serves at St. Joseph, LaGrange, and St. Anthony of Padua in Angola; Fathers Frederick Pasche and Bernie Zajdel serve at St. Anthony  in Angola, and Father Philip Schneider serves at St. Paul Chapel at Clear Lake. These friars reside in the St. Anthony Friary in Angola.

The Secular Franciscan Order (Third Order of St. Francis) is a community of men and women who seek to pattern their lives after St. Francis of Assisi and, through him, Jesus Christ. The order has the following fraternities: