Berkley Zache had accomplished quite a bit in her sensational freshman season on the pitcher’s mound. The Saint Joseph softball star had already amassed a 16-1 record as the Indians’ starting pitcher, tossing 250 strikeouts and allowing just seven earned runs the entire year.

And yet, she saved her absolute best for last. 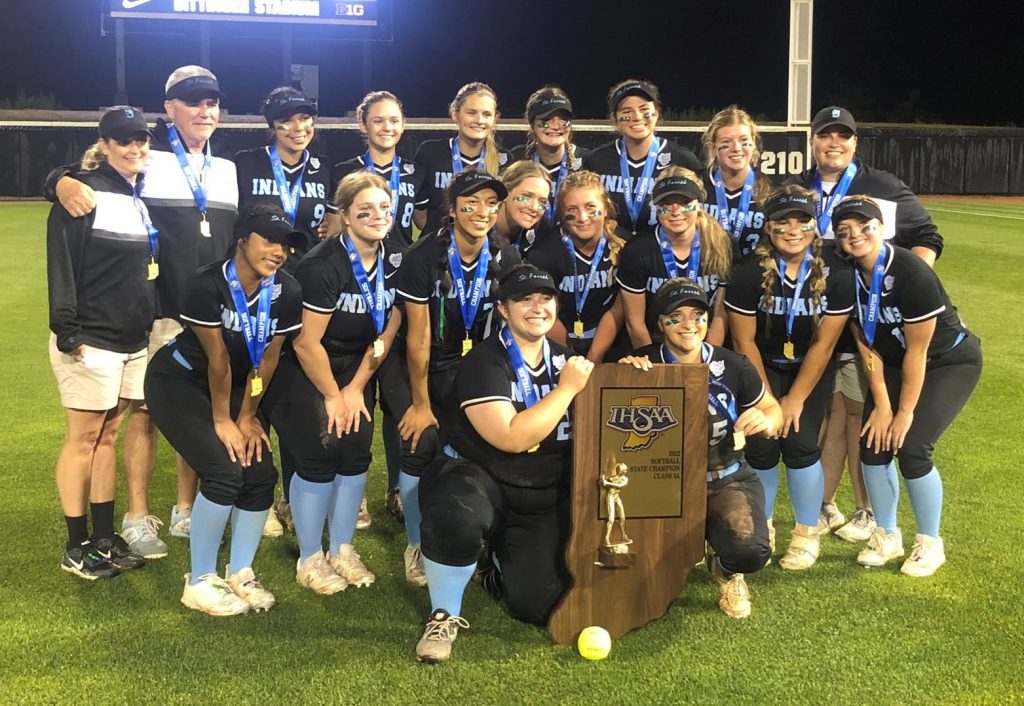 Provided by Stephen Anthony
Members of the Saint Joseph softball team pose together after winning the IHSAA Class 3A State Title at Purdue’s Bittinger Stadium in West Lafayette on June 10.

Berkley’s pitching heroics – and game-winning hit in the bottom of the ninth inning – helped Saint Joseph knock off top-ranked Tri-West Hendricks 1-0 in the IHSAA Class 3A State Championship Game on June 10 at Purdue’s Bittinger Stadium in West Lafayette. The victory marked the Indians’ first-ever state softball title and capped off a magical tournament run in which head coach Earl Keith’s squad did not surrender a single run to its postseason opponents.

“The feeling is still so surreal,” admitted Keith several days after the game. “I am truly overwhelmed with all of the good wishes and praises. It is such a great feeling to have accomplished this with this team. Like I always say, these girls make me look good!”

The Indians began doing just that long before they stepped onto the diamond at Bittinger Stadium. Entering the state championship, Saint Joseph (28-3) had blitzed its postseason opponents by a combined score of 20-0, including four victories over teams ranked in the top eight in the state. In the Twin Lakes semi-state alone, Berkley pitched a no-hitter vs. Yorktown in the afternoon semifinal, only to top that effort with 21 strikeouts in a 13-inning gem vs. Leo later that evening.

“I feel like situations when you’re under pressure show what type of player you are,” said Berkley. “Those are the times that I usually do my best and enjoy the most.”

Berkley and company knew that plenty of pressure awaited them in West Lafayette. The Tri-West Hendricks Bruins (29-3) averaged a blistering 10 runs per game and boasted a pitching ace of their own in sophomore Audrey Lowry. 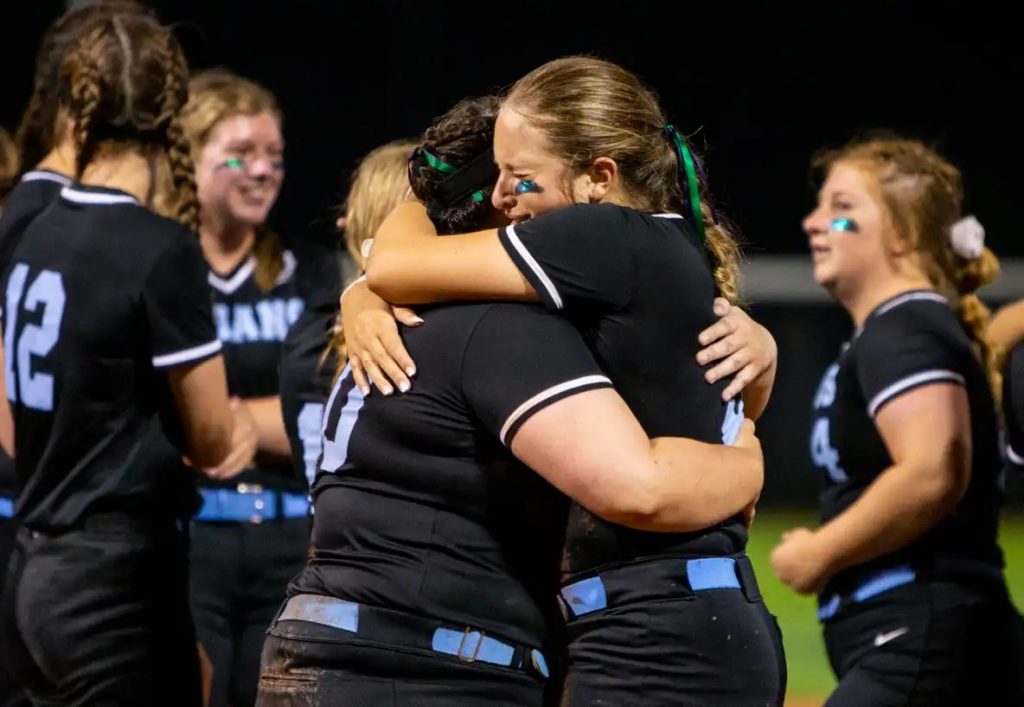 Berkley and Lowry began trading strikeouts and matching each other pitch-for-pitch, as the Indians and Bruins battled through eight scoreless innings. Saint Joseph couldn’t generate any offense due to Lowry’s speed and movement on the ball. Meanwhile, Berkley had to work out of a jam in both the sixth and seventh innings, in which the Bruins had runners in scoring position with only one out, but she managed to pitch her way out of it on both occasions.

“I have so much respect for that girl,” Saint Joseph senior Haley West said of Berkley. “She’s the backbone of our team. The way she gets out of adversity is amazing. She never lost her composure and always stayed strong.”

With one out in the bottom of the ninth inning, West stepped up to the plate, her team still searching for its first hit of the night.

“I was scared going up there [against Lowry] throughout the game, but I tried to have more confidence for this one,” admitted West. “I just thought, ‘I have to get something. We need something.’ My biggest goal was just to make contact. When I did, I watched and saw it drop, and it was like, ‘Now we’re in this.’”

West’s double breathed life into the Indians and brought none other than Berkley to the plate. With the state championship hanging in the balance, she ripped a grounder through a hole in right field, allowing West to sprint home for the winning score.

As the Saint Joseph players poured out of the dugout to celebrate, Keith stood hunched over in shock.

“When Berkley got the winning hit, it was a feeling of ‘Did that really just happen?’” said Keith. “About five seconds later, it hit that we had just won. At that moment, I felt so much pride in the girls. I also thought of all the great players who have gone through our program before who helped build us to this point.”

And yet, it was a freshman who stole the spotlight on the sport’s biggest stage. Berkley had pitched a complete-game shutout, striking out 20 Tri-West Hendricks batters. Lowry had tossed 22 strikeouts of her own and had taken a no-hitter into the ninth inning. Both pitchers shattered the previous Class 3A record for strikeouts in a championship game (14) in a classic that’s already being lauded as one of the greatest pitchers’ duels in IHSAA history.

“Berkley’s performance was remarkable,” marveled Keith. “She and Savannah Hamilton, who had a win in the sectional round, were both unbelievable. It was amazing to watch, especially realizing they were making history.”

However, Berkley was quick to deflect the credit away from her own performance and toward her teammates.

“I had a really good defense behind me and good bats behind me,” remarked Berkley. “I owe a lot of success to my sister [sophomore Riley Zache] catching behind me.”

The Indians joined Indianapolis Scecina’s 2007 squad as the only two teams in Indiana high school softball history to win a state championship without allowing a single run through the entire tournament. Taking into account the Indians’ final two regular season games, Saint Joseph ended the year with nine straight shutouts – an accomplishment that no other Indiana team in the history of the sport can claim. To Berkley, it speaks volumes of the man who’s been at the helm of the program for the last 17 years.

Back in Keith’s second season, he developed a team mantra that he dubbed the “Indian Softball Creed.” His players still sport its simple truth on their practice t-shirts: faith in my ability, faith in my teammates, faith in God. Keith said the creed came from a desire to embrace his position of influence.

“I felt very blessed to be in this situation, and I needed to lead by example,” Keith explained. “It is a combination of love for one another, loving yourself and always knowing to lean on God.”

“That quote is very special to me,” said West. “I didn’t understand it as a freshman. But when sectionals came, that’s when we started playing for God and through Him.”

Even after an unforgettable individual performance, Berkley recognized the Lord’s fingerprints all over the championship game and witnessed the team creed play out in front of her eyes.

“We can’t go into a game and do it all ourselves,” said Berkley. “We have to have faith in each other and in God. If we’re going to do it, it’s going to be a team effort with everyone working together. God kind of played a role in that. We knew He would be there with us and help us throughout the game.”