EDINBURGH, Ind. (CNS) – Melissa Coles received a call in the late summer of 2019. She didn’t listen long before she figured it was a prank call and hung up. When the person called back, she hung up again.

“On the third call, they had all the producers on the line – Kirk Cameron and the Kendrick brothers,” she said, referring to Alex, Shannon, and Stephen Kendrick, producers of Christian films such as “Fireproof,” “War Room,” and “Courageous.” “They said they wanted to make (the documentary) ‘I Lived on Parker Avenue’ into a movie.” 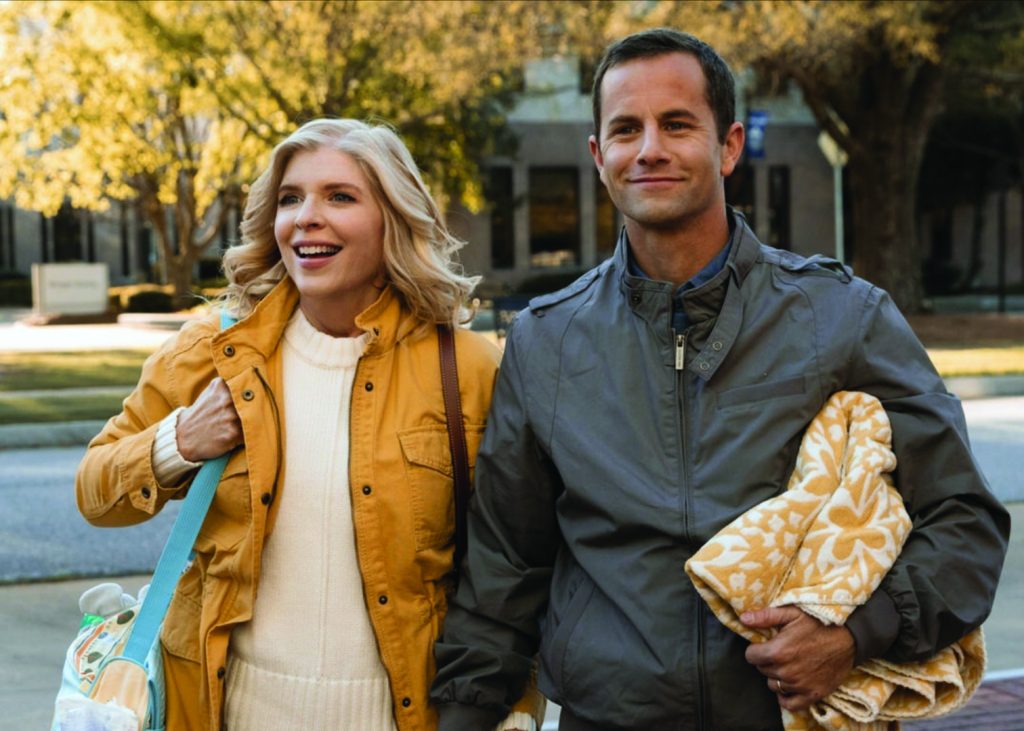 Rebecca Rogers Nelson and Kirk Cameron star in a scene from the movie “Lifemark.” (CNS photo/lifemarkmovie.com, via The Criterion)

Coles knew the 2018 YouTube documentary well – she was one of its subjects.

“They said, ‘Not only do we like it, we love it and we want to be part of it,’” Coles told The Criterion, newspaper of the Archdiocese of Indianapolis.

Three years after that call, their vision has become reality. The film, “Lifemark,” will show in select theaters throughout the country Sept. 9-16. A novel of the same name will be available sometime in August.

But Coles, born and raised in Columbus, Indiana, was hesitant to say “yes” to the film at first – unlike her instant “yes” in 1993 when something told her to get up from an abortion table.

Coles was 18 when she experienced an unplanned pregnancy. As revealed in “I Lived on Parker Avenue,” she and her boyfriend knew they did not have the means to raise a child. They decided to abort the baby.

Soon, Coles was on a table in an abortion facility in Indianapolis with a doctor seated in front of her. As he was selecting a tool to start the abortion, an extraordinary thing happened: She heard a voice.

Through a private adoption agency, she selected a couple from Louisiana, Susan and Jimmy Scotton, to raise her son, whom they named David.

The documentary records the emotions of Coles, David, and the Scottons in 2013 as they all meet for the first time nearly 20 years after David’s birth. It was the first time Coles held her son since the day he was born.

She doesn’t deny the pain of giving a child for adoption.

But then she considers her son’s life. He is now 29, a law school graduate and newlywed who works as an attorney in Louisiana.

Coles eventually had another child, Courtney. She loves her daughter with all her heart and loves being a mom.

Despite that joy, Coles said she was “angry with God, bitter. My whole life has been a struggle. Why did I have to give up my son? Why didn’t (God) give me what I needed to keep him?”

Then she met Shawn Coles, her husband now of 16 years.

“On date number one he called me out on where I stood with the Lord,” said Coles, a nondenominational Christian. “I realized I wasn’t living for God. I just needed something to wake me up – hence my husband. I didn’t give my life to God until I met Shawn.”

He helped her learn to trust God. Shawn also was the one who encouraged his wife to say “yes” to the “Lifemark” film.

“I had a whole list of reasons not to do it,” she said. “I didn’t want people to see me at my weakest. I didn’t want to be used.

“Then my husband said, ‘What if it helps just one person?’ So, I agreed to do it.”

Working with Cameron and the Kendricks was “just amazing,” said Coles. “They allowed me to be involved, read the script and make changes and suggestions.”

They even sought her input on the cast, sending her paperwork for the women who applied to play young Melissa and “current” Melissa – “I  just don’t like saying ‘old Melissa,’” she joked. Marissa Hampton and Dawn Long, respectively, were cast as her then and now.

Coles and her husband were invited to spend a week on set at the studio in Georgia so she could offer support while emotional “Melissa” scenes were filmed.

“When you approach the studio building, you feel the Holy Spirit hit heavy and hard,” Coles recalled. “It’s even more powerful when you go inside. When we were with them, we could see the Holy Spirit at work.”

There were roadblocks to making the film as well, she said. The pandemic caused delays, and the producers struggled to find a company to distribute the film “because Kirk Cameron and the Kendricks don’t support abortion,” said Coles.

But those same pro-life values permeated the project, leading to the saving of one unborn baby before “Lifemark” was even released.

A pregnant woman on her way to an abortion center stopped to investigate a large crowd she saw gathered near the studio, said Coles.

“Raphael (Ruggero), the actor playing David, was giving a talk,” she explained. “She was invited to be an extra in the movie. She decided not to go through with the abortion.”

That story alone fulfilled Coles’ conviction that if the movie helped “just one person,” it would be worth the time and sacrifice.

Still, she hopes for more.

“I hope the film will help more people see the beauty of adoption and understand how important adoption is,” said Coles, adding that she hopes it will help those facing an unplanned pregnancy or a forced abortion know “they have plenty of options.”

Coles also looks forward to the film “expanding the platform” for her pro-life efforts. In addition to speaking nationally in support of adoption, Coles works with women in unplanned pregnancies, has finished one unpublished book and is writing another as well as a script while “dipping my feet in acting.”

She also hopes to create a nonprofit organization to help fund education for students – both women and men – who choose life for their unexpected, unborn child.

“I still feel the void of losing David,” she said. “But I think my heart is healing. When I see how I help others by letting God use me as his tool, it increases my healing.”

Editor’s Note: For more information about “Lifemark,” go to www.lifemarkmovie.com. To invite Coles to speak at an event, go to cutt.ly/MelissaColes.