JASPER, Ind. (CNS) — Even as sanctuaries across the country closed their doors to stop the spread of the coronavirus, a sacred space in Jasper remained accessible.

Encircled by shrines depicting the mysteries of the rosary with a 12-foot-tall man-made cave as the centerpiece, the town’s outdoor Geode Grotto became a refuge even from the fear of airborne viruses.

“I just love how everybody can still come here and they can come on their own time and they can still be safe,” Andrea Bradford told Catholic News Service May 27. Bradford works part time in a nursing home and has to diligently protect her health for the sake of the residents.

“It’s outdoors, it’s beautiful and it just helps with the senses and helps us to remain calm in this time of trouble,” added Tim Bell, the president of Friends of the Grotto, a nonprofit that cares for the grounds. 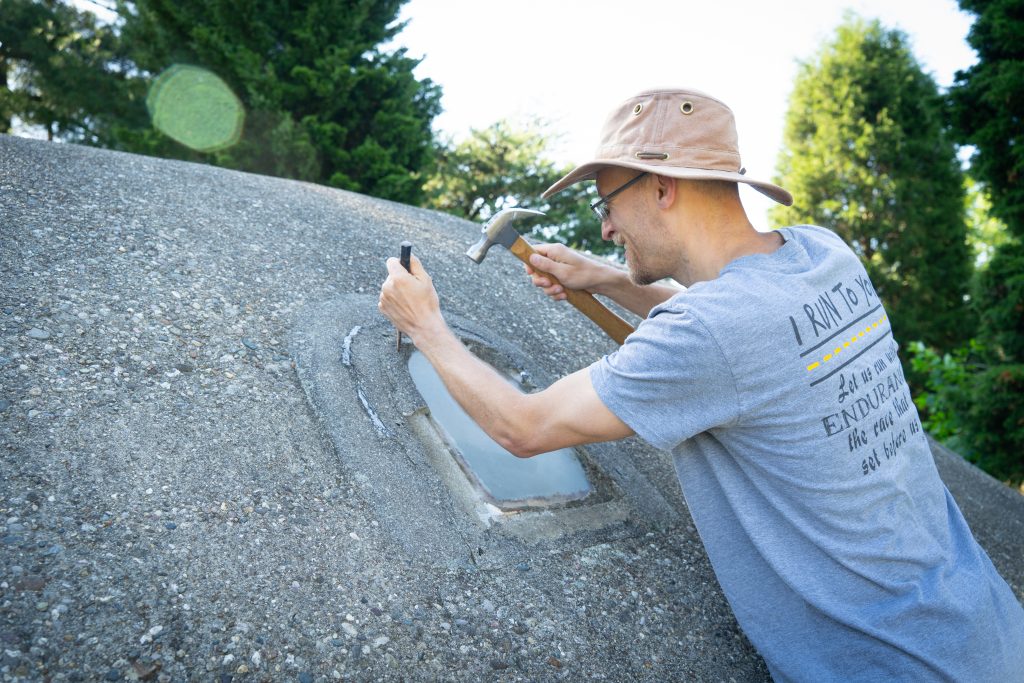 Nathan Bradford of Jasper, Ind., replaces a window on the top of the town’s Geode Grotto May 30, 2020. The shrine was constructed in the 1950s by a priest coming to terms with anger and grief. (CNS photo/Katie Rutter)

The flowerbeds and shrines of the Geode Grotto grace more than half an acre of land and offer many places to sit, meditate and pray. Much of its beauty comes from the unusual rocks that form the structures: hollow stones called geodes that are plentiful in southern Indiana. Unassuming on the outside, geodes contain quartz crystals that glitter in shades of white, yellow, pink and purple.

“I live close by so I’ll walk over whenever I want to and I’ll say a rosary, I’ll say a Divine Mercy Chaplet and just sit here for a few minutes,” said Dee Ann Bell, Tim’s wife, who also is a member of the nonprofit.

Peace and consolation are at the very core of the grotto’s origins. The shrine was constructed in the 1950s by a priest coming to terms with a tragedy of his own.

As a child, Father Philip Ottavi, a member of the Sons of Divine Providence religious order, was trapped beneath rubble after a catastrophic earthquake took over 80,000 lives in his native Italy. Both his parents were killed in the disaster.

“For a long time, he had this anger toward rock, and whenever he would see a rock, he would kick it,” explained Bradford, “so when he was priest, he said, ‘Everything is God’s creation, and I know the rocks are God’s creation too.’”

Father Ottavi constructed the grotto out of the very objects of his anger and fear. After about a decade of work, he completed a large cave that re-creates the Lourdes Marian apparition in France with statues of Mary and the visionary, St. Bernadette; seven smaller shrines to saints; flower-lined walls that depict the mysteries of the rosary; two fountains; and dozens of flowerpots that weigh as much as 2,500 pounds each.

“To me it’s a beautiful reminder of what we should do with our anger, to turn it into something beautiful,” summarized Bradford. 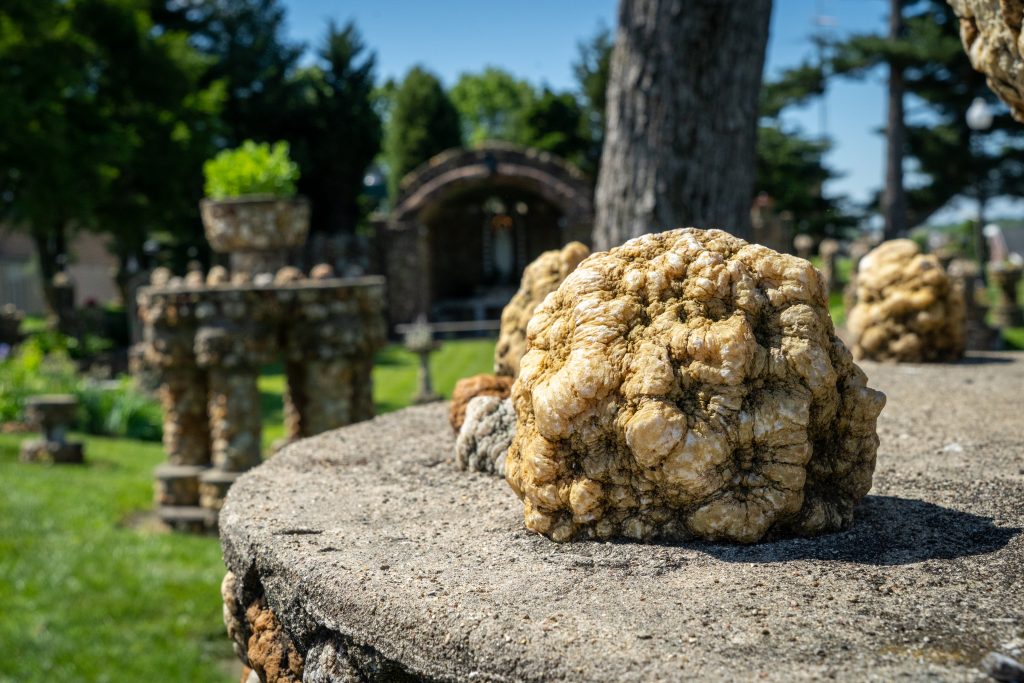 A geode — a crystal-filled rock found in southern Indiana — is seen on a flowerpot at the Geode Grotto in Jasper May 30, 2020. Caretakers of the shrine see the stones as symbols of peace after anger and grief, since the shrine was constructed by a priest coming to terms with his childhood survival of an earthquake in his native Italy that claimed the lives of his parents. (CNS photo/Katie Rutter)

Even before the pandemic, a dozen or more Catholics would gather at the grotto on the 13th day of every month to pray the rosary together. That tradition continued every month except April, when restrictions were tightest. In May, attendees stayed 6 feet apart and most wore masks.

“(The pandemic has) always been mentioned, that we hope people are staying healthy, we hope that people are not living in fear, that they rely on their strength from Christ and turn toward Him,” explained Dee Ann Bell.

Members of the nonprofit are continually on the grounds, which requires restoration after constant exposure to the elements. During the pandemic, they have cemented geodes back onto structures, resurfaced metal decorations, replaced plexiglass windows in the Marian shrine and tended the flowerbeds.

On May 30, the day that Pope Francis led the world’s Marian shrines in praying for an end to the pandemic, a Jasper resident stopped by and cited the pope’s actions as his motivation. He had only been to the grotto once before, so Bradford shared its history.

“We have people that walk through all the time just because it’s a pretty place, and not necessarily the same people you’re going to meet at church,” said Nathan Bradford, Andrea Bradford’s husband, “and you have a chance to talk to them about Jesus.”

The group’s next project is to excavate a tactile rosary imprinted in one wall that has been swallowed by the landscape. As restoration continues, these caretakers hope that the shrine will continue to be a place of peace and refuge, whatever may come.

“I never really know how much a place like this would inspire people to faith in Jesus,” said Nathan Bradford, “but that’s always kind of the hope.”