Indiana Tech houses a number of collegiate programs, and its Fort Wayne campus has become a gem within the footprint of the city. The university has enjoyed numerous improvements over the past years, evidenced by the expansive growth of that campus. Its recent improvements have included not only educational buildings but athletic facilities as well — with the goal of educating competent students to compete in an ever-changing world.

After an exhaustive search for new leadership, the board of trustees chose Dr. Karl Einolf to pilot the university and chart its course. Einolf comes to Indiana Tech from Mount St. Mary’s University in Emmitsburg, Maryland, where he was dean of the Richard J. Bolte, Sr. School of Business. He also served as acting president of Mount St. Mary’s from February 2016 to June 2016, and began his presidency at Indiana Tech on July 1. He was officially inaugurated on Dec. 2. 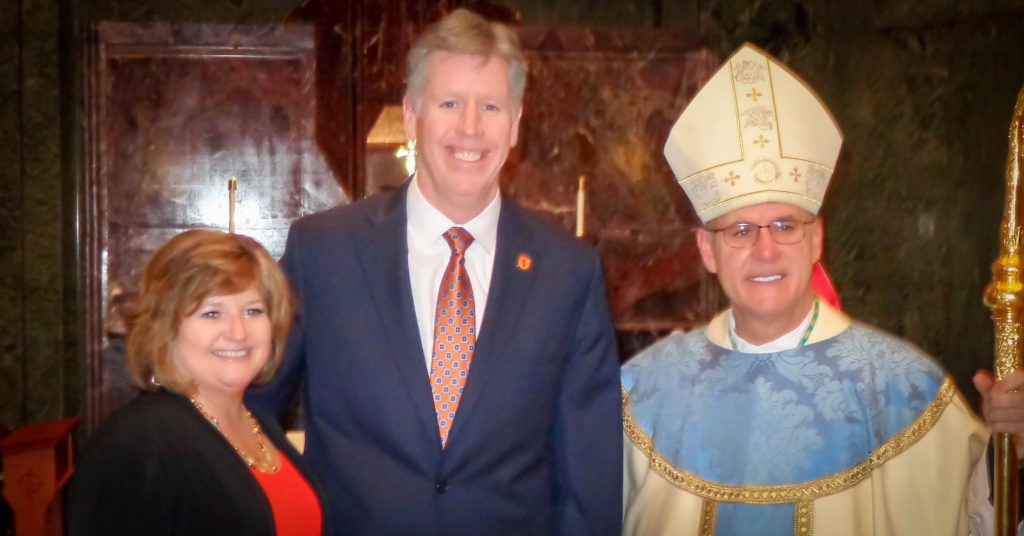 A Mass in honor of the inauguration of Dr. Karl Einolf as the president of Indiana Tech was celebrated in the Mother Theodore Guerin Chapel, Fort Wayne, on Dec. 2 by Bishop Kevin C. Rhoades. Einolf and his wife, Maria, are pictured with Bishop Rhoades following the Mass.

Einolf started at Mount St. Mary’s as an assistant professor of business and has since held various positions including professor, director of the honors program, director of the Florence study abroad program and director of the BB&T Center for the Study of the Moral Foundations of Capitalism. Before coming to “the Mount” he was an instructor and Warren-York Fellow at Lehigh University. He has also held management positions in marketing and finance with Sprint Corporation.

He acknowledged his parents as important and influential in his early college years. He met his wife-to-be in those college years as well, he said, describing her as “the perfect life partner and friend.” They were married by Bishop Norbert F. Gaughan, another personal spiritual mentor, in 1990.

Faith played a large part in Einolf’s decision to pursue the position of president of Indiana Tech. Raised Catholic, Mount St. Mary’s University provided him with good opportunity to interject his faith into his work as a teacher and scholar. He emphatically stated, “There are so many faithful people at the Mount, and they taught me to be silent and listen to God, to pray, to be honest and humble, to love unconditionally and to be a believer.”

An Inauguration Mass was celebrated by Bishop Rhoades at 9:30 a.m. Saturday, Dec. 2, at St. Mother Theodore Guerin Chapel next to the Cathedral of the Immaculate Conception in downtown Fort Wayne. During his homily, Bishop Rhoades declared that Einolf’s presidential position was indeed a special calling requiring a special person. He noted the connection between Mount St. Mary’s, Indiana and the Diocese of Fort Wayne-South Bend. Father Simon Brute, instrumental in the founding of Mount St. Mary’s University in 1808, was the first bishop of the first diocese in Indiana (Vincennes). Father Brute came to Indiana from Mount St. Mary’s in 1834.

Bishop Rhoades also touched on several truths espoused in teachings of St. Paul. One of these is the importance in remembering that God is close to His children: In fact, He is “always by our side.” St. Paul further encourages us all to “have no anxiety at all,” he said. Further, we need to “rejoice in the Lord always”… throughout our journey here. Bishop Rhoades also presented advice to Einolf, in his new position: “Continue to be a man of prayer.”

The bishop referenced the fact that kindness is a virtue possessed by good leaders, and that the presidency of a college such as Indiana Tech requires “excellence in its mission and programs and it expects excellence in its president.” Virtue is “most needed in our universities today — education in virtue, in living a good life, in having good character,” he said, stressing the importance of witness and example, as found in the life of Einolf.

Bishop Rhoades concluded with a special prayer that, united to Christ the vine, Einolf’s service at Indiana Tech would bear much good fruit; and asking the Lord to bless him and for Mary, the Blessed Mother, to be ever at his side with her maternal love and care.

Later the same day, at 2 p.m., a formal inauguration ceremony took place at the Schaefer Center on the Indiana Tech campus. Einolf installed as the ninth president of the 86-year-old school.

He sees many positives on the horizon for his new educational institution. “I applied to the presidency at Indiana Tech because of the commitment to preparing students for careers in the global 21st century society and for lives of significance and worth,” he said. “While Indiana Tech does not have a specific religious affiliation, it became quickly apparent to be that people in the Indiana Tech community, and in the Fort Wayne community, are beautifully faith-filled.”