“I’m sorry that I have to be here today to deliver this news,” said the vice president of public affairs for Indiana Right to Life. “Earlier today, 48 consumer complaints were filed with the Indiana attorney general’s office [and the state Department of Health] against nine Indiana abortion doctors who have allegedly failed to follow the legal reporting requirements to protect young children from sexual abuse.”

The press conference, which took place at the Indiana Statehouse in Indianapolis, was one of five held throughout the state that day by Indiana Right to Life. Four of the conferences took place in cities where the alleged misreporting took place: Bloomington, Indianapolis, Lafayette and Merrillville.

A press conference was also held in South Bend, where one of the accused doctors is promoting the opening of an abortion center.

The alleged violations occurred less than a year after the state law in question went into effect on July 1, 2017.

That law requires abortions on girls less than 16 years of age be reported within three days to the Indiana State Department of Health and the Indiana Department of Child Services. The goal of the law is to enable authorities to investigate such cases for potential child sex abuse. 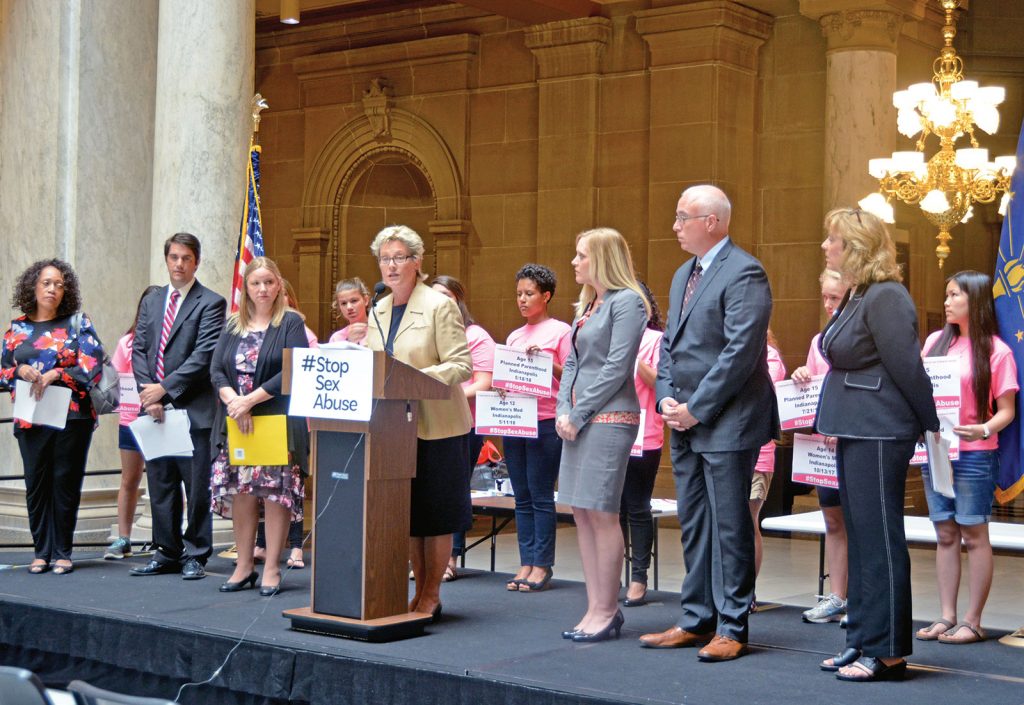 The flawed reporting was discovered by Indiana Right to Life. In an ongoing effort to monitor the abortion industry in Indiana, the organization requested from ISDH all of the public-record Terminated Pregnancy Reports for abortions performed in the state since the law went into effect.

The review revealed that on 48 of the forms for girls ages 12-15, the “date reported to DCS if patient [is] under 16” was not simply past the state-mandated three-day timeframe — it was left blank altogether, according to Indiana Right to Life.

“Given that as many as one in four girls may experience sexual abuse or assault before the age of 18, it’s likely that some of these [48 improperly reported] pregnancies were not the result of consensual activity,” Swayze Liebel stated. “We’re not here to speculate. That’s the point of [state agencies] getting involved.”

And if an investigation does find that “an Indiana physician is not following the law …, then the Indiana attorney general must investigate and must look into whether or not that physician should continue to hold a medical license on a going forward basis,” said state Sen. Mike Delph, R-Carmel, at the Indianapolis press conference. His district includes the capital city.

Additionally, U.S. Reps. Jim Banks and Todd Rokita submitted a request to the state attorney general’s office to investigate the use of Title X funds for the facilities in question.

“We are concerned that these entities may be recipients of federal Title X grant funds, which require compliance with state laws,” the request reads. “These facilities face allegations of failing to report abortion procedures on minors to the Department of Child Services as required by state law, which, if they had received Title X funds, would be in violation of federal law.”

State Sen. Erin Houchin, R-Salem, whose district includes Bloomington, is one of the three co-authors of the law in question. She provided comments at the news conferences in Bloomington and Indianapolis and spoke one-on-one with The Criterion.

“I was very disheartened,” she said of her reaction upon learning of the allegations. “It is frightening that we have girls as young as 12 years old showing up at abortion facilities in Indiana — let alone the 13-, 14- and 15-year-old girls — and those are not being reported. It is so critical, this reporting, to protect them from continued sexual abuse. Those departments can’t intervene if reporting is not being made.”

According to information provided to press members, the 48 abortions took place in all six licensed abortion facilities in Indiana. Thirty-six of the cases occurred in Indianapolis, while nine took place in Merrillville, two in Bloomington and one in Lafayette.

“There is one doctor I am compelled to call attention to — Dr. Jeffrey Glazer,” said Swayze Liebel. “Of the 48 [alleged violations], he’s had 11 reports filed against him this morning. He’s attempting to help an abortion center to open in South Bend by being its medical director.”

In an interview with The Criterion, Crista Miller of Fort Wayne, who started GivingTeensGrace.org to educate parents and families on the risk of online predators, said the allegations “came as no surprise” to her.

“We know it’s been an issue with trafficking and abortion going hand in hand for years,” said Miller, who spoke at the South Bend press conference. “When you have a law that’s put in place, and you have such a vast number of people getting abortions and so many doctors and clinics, the difficult piece is enforcing the law.

“Until someone steps up like [Indiana] Right to Life and [asks for] an investigation, then nobody knows there’s something that needs to be enforced.”

Ali Slocum, communications and marketing director for Planned Parenthood of Indiana and Kentucky, provided a statement in response to the complaints.

“At Planned Parenthood of Indiana and Kentucky, the health and safety of our patients is our top priority, and we take our responsibilities to provide the best possible care for our patients seriously,” she said. “We adhere to Indiana State Department of Health reporting requirements and follow best public health practices to ensure patients get the help they need.

“We cooperate fully with all ISDH inspections, and immediately address any issues that officials share with us. Our most recent routine ISDH inspection, conducted in March of 2018, confirmed that we are adhering to state reporting requirements for minors in our health centers.”

In his closing comments at the Bloomington press conference, Indiana Right to Life President and CEO Mike Fichter expressed the intensity of his feelings regarding the alleged violations.

“Frankly, it sickens and angers me that these girls may have been sent right back into an abusive situation because DCS has never been notified and given a chance to do their job,” he said.

“Regardless of party affiliation, even regardless of personal feelings on abortion, we should all be able to stand together and stop sexual abuse of young girls in Indiana,” he said.

“We fought hard to pass the laws that require the reporting of abortions on young girls. We cannot and will not stand by and be silent. We have to stand up for these young victims.”

Natalie Hoefer is a reporter for The Criterion, the newspaper of the Archdiocese of Indianapolis.