Part of the mission of the Church is to meet people where they are in their faith journey: That was the purpose of “De la Misa a la Misión,” a virtual retreat for Spanish-speaking liturgical ministers. The retreat has been a collaborative effort between the Diocese of Fort Wayne-South Bend Hispanic Ministry office, the Office of Worship and the Secretariat for Communications.

“De la Misa a la Misión” had been planned as an in-person event that would take place at St. John the Evangelist Parish in Goshen, but due to COVID-19 restrictions, it was moved to an online platform. Three talks were prerecorded by Spanish-speaking priests: Father José Arroyo, parochial vicar at St. John, Father Osman Ramos, FM, pastor at St. Gaspar del Bufalo in Rome City and St. Joseph in LaGrange, and Father Mateo Kuczora, CSC.

Esther Terry, director for Hispanic Ministry and Special Projects, worked to create the event “in response to requests from several pastors that we offer formation for liturgical ministers in Spanish.” In the past year and a half, there has been a joint effort between Terry and Brian MacMichael, director of worship for the diocese, to create resources and training in Spanish to support parishes with large Spanish-speaking populations.

The newly created Spanish-language retreat will serve as a complement to the retreats for liturgical ministers in English that take place yearly.

With a large Hispanic population in the diocese, there is a great need to translate resources into Spanish. As Terry pointed out, about 25% of Catholics within the diocese are Hispanic and about 75% of those speak Spanish as their primary language. Terry stated, “Having diocesan events in Spanish is really important for our Hispanic Catholics. The Church is a home to people of many cultures and many languages, and we all feel most at home when we can speak our own language.”

Terry continued, “It is a joy to collaborate with parishes and other diocesan entities to offer programming that helps Spanish-speaking Catholics grow in their relationship with Jesus Christ.”

Two of the presenters represent different geographic locales in Latin America. Father Arroyo is from Puerto Rico and Father Ramos is from Nicaragua. Father Arroyo stated that this association allows them to better connect with the Hispanic communities within the diocese. “Not only are we speaking their language, but we share their culture.”

While customs might differ from country to country and he sometimes has to be aware of specific words that have different meanings in different cultures, he sees this as a good opportunity to evangelize.

He admitted that there are challenges in trying to reach a more community-oriented group with online content but hopes that leaders of Spanish-speaking communities can use the videos in a community setting, watching it as a group at a later date.

In his talk, Father Arroyo spoke of encountering Jesus in the Liturgy of the Word and the Liturgy of the Eucharist, using the biblical story of the road to Emmaus. He explains in the video how the first part of the Mass reveals Jesus in the sacred Scriptures and the second part reveals Him in the breaking of the bread, “yet we need eyes of faith to understand. Our hearts are burning knowing that He is with us, made present in the Eucharist.”

Father Arroyo has also garnered attention for recent TikTok videos geared particularly toward youths. The videos usually include a written or spoken Bible verse and can last anywhere between 7 and 59 seconds. He stated that it is important to “feed our people,” particularly those who speak other languages and to have “open hearts” to reach out to them. The Hispanic community, he said, is “very grateful” to anyone who makes efforts to include them in their native language. 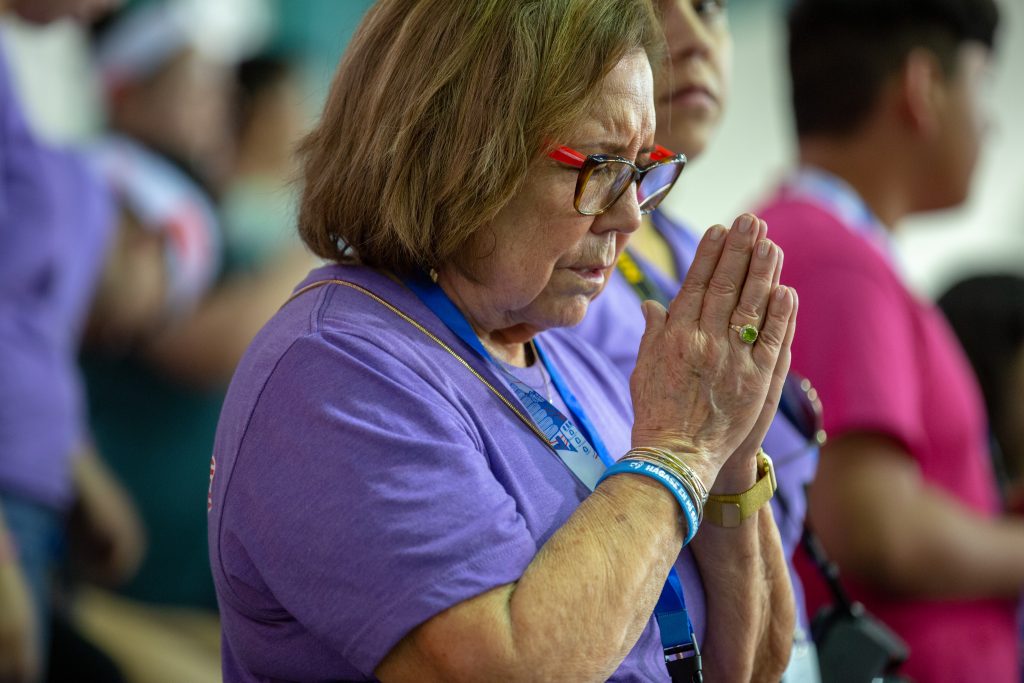 The spiritual talk Father Ramos recorded for the virtual retreat was entitled “Eucharist, Thanksgiving and the Source of Grace.” In it, he explains how Jesus is “the sacred food that we need for our journey in this world.” The concept of spiritual food for the faithful, however, requires an understanding that Christ present in the Body and Blood is not food for the body nor is it “only a spiritual food” to be treated with disrespect. “It is not a spiritual meal that comforts me, it is God Himself who has humbly made Himself food in mercy for me,” Father Ramos states.

He goes on to teach that receiving Christ in the eucharistic feast must be done only in a state of grace, free from mortal sin, with all the dignity due to Him. Father Ramos said this topic is “of utmost importance for the ministers who serve in the Sacred Liturgy because they have the privilege of touching the sacred things and of touching God Himself when they distribute the Eucharist, therefore, they should be the first to be aware of the wonderful gift they have received.”

The goal of his talk is to deepen the relationship with God of those liturgical ministers and to help them seek greater holiness. This, he said, is significant even beyond the Hispanic community, as the Eucharist is central to the Catholic faith. However, he stated that “it has been a privilege to share this spiritual talk with the Hispanic community who expresses their devotion to the Eucharist in a very special way.”

All three talks, as well as introduction videos, went online June 20 and are available to anyone who wishes to access them at any time by visiting www.diocesefwsb.org/RetiroVirtual.