By most historical accounts, the 20th century was the bloodiest, most tyrannical period of modern times. Two world wars, multiple other conflicts and the rise of brutal, totalitarian regimes prematurely ended the lives of millions and demanded the attention and action of nearly every country in the world.

Those who stood in defense of human dignity, justice and charity against the violence and totalitarianism of the time often paid with their lives. Venerable Cardinal Joseph Mindszenty of Hungary, by the grace of God, did not.

Around 1950, in Zanesville, Ohio, a young Patrick Flood’s Catholic grade school class watched a movie about persecuted Christians in the newly Communist countries of Eastern Europe. One, he remembers, was Mindszenty, then the bishop of Esztergom.

Flood describes his younger self as being “very taken with my country.” A student of history, and later, political science and philosophy, he yearned for the opportunity to “show my dedication to the United States and the values that it stands for.”

Like his peers, he participated in ROTC in college. “We were ready to go,” he remembered. The problem was, there was nowhere to send them. World War II and the Korean War were over. “But we did have a Cold War.”

During college, Flood heard about the U.S. State Department Foreign Service, which offered the kind of challenge he was seeking. After passing the entrance exams, he was sworn in and assigned first to an office within the department and two years later to the U.S. Embassy in Mexico City as a consular officer. In 1967, Flood was appointed chief of the Consular Section at the U.S. Embassy in Budapest. It was there that he became closely acquainted with the preeminent symbol of Hungarian freedom and justice. 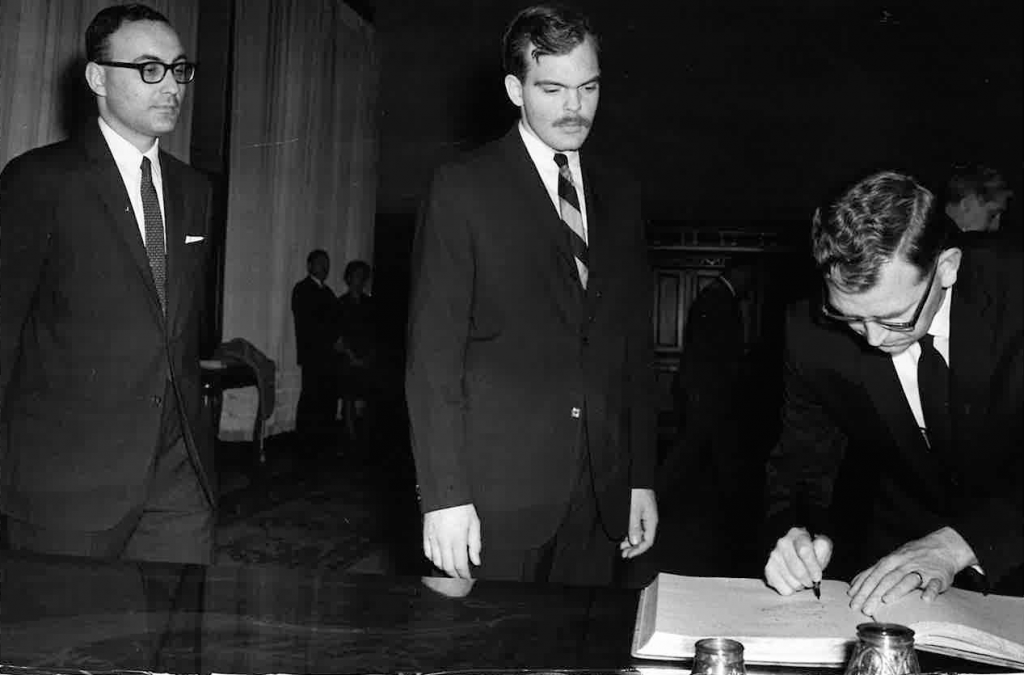 Provided by Patrick Flood
Flood, center, prepares to sign the customary book at the presentation of credentials of newly arrived U.S. Ambassador to Hungary Martin Hillenbrand in the U.S. Embassy in Budapest Oct. 30, 1967. At left is Flood’s deputy Tom Schlenker and signing the book is Jim Brackman, embassy budget and fiscal officer. Flood’s responsibilities as chief of the Consular Section were broadened that same year to include acting as liaison to Cardinal Joseph Mindszenty, who was living at the embassy in refuge.

Appointed Bishop of Veszprem by Pope Pius XII in 1944, Cardinal Mindszenty’s protests against Nazi genocide led quickly to his arrest and imprisonment. He remained in prison until the Nazis were defeated in Hungary in 1945.

Following World War II, he was appointed archbishop of Esztergom, a position that carried with it the traditional, secular title of Prince-Primate of the Austro-Hungarian empire. A short time later, he was named a cardinal.

In late 1948, Cardinal Mindszenty was arrested illegally by the Soviet authorities who controlled Hungary. After a show trial, they sentenced him to life imprisonment under false charges. Even though his sentence brought protests from the pope, leaders of Western powers and the U.N. General Assembly, he remained in prison for eight years.

In late 1956, young Hungarian “Freedom Fighters” initiated a revolution against Soviet tyranny. Forcing their way into his prison, they freed the cardinal.

United to their cause and once again exercising his duty to promote social justice, in a Nov. 3 radio speech Cardinal Mindszenty emphasized the value of national independence and democracy. On Nov. 4, 1956, Soviet forces that had invaded the city to quell the uprising sought his re-arrest. He took refuge in the U.S. Embassy, seeing an opportunity to serve as a symbol of continuing resistance to the domination being imposed once again on his nation.

When Flood and his family arrived in Hungary, Cardinal Mindszenty had been in refuge at the embassy for 11 years. During all of that time the Hungarian secret police watched the embassy 24 hours a day, parking an unmarked car at each exit and staffing it with plainclothes officers who were eager to arrest the cardinal should he decide to leave the embassy — which he was free to do at any time.

‘In the service of His Eminence’

In 1968, Flood’s responsibilities at the embassy were broadened to include acting as liaison to the cardinal. This entailed attending to any of his needs: for instance, providing books and facilitating occasional correspondence with the Vatican and visits from the cardinal’s family and representatives of the Vatican, notably the Archbishop of Vienna.

Flood and other embassy personnel had a standing invitation to attend Mass celebrated by the cardinal on Sundays and holy days in his quarters. But among the moments most treasured by the lifelong Catholic from Ohio were the 7 p.m. strolls they took around the embassy courtyard. “We would talk about many things, but mainly, my presence was about his safety and for companionship,” Flood recalled. This activity rotated among the American staff.

On one very cold January evening, the cardinal took his daily constitutional wearing a heavy cloak, but no gloves.

“I took mine off, to give to him, but he said ‘no’ – that he was used to the cold,” Flood remembered. During his lengthy imprisonment, the cardinal explained, he had once asked his jailers if they would bring him a pair of gloves to enable him to say Mass in his cell. When they refused, he said, “‘Then I shall not need them.’ He added, ‘I have never worn gloves again.’ Such willpower is rare indeed.”

Among the cardinal’s few external contacts was a priest of the Diocese of Fort Wayne-South Bend, Msgr. John Sabo. A second-generation Hungarian-American priest and pastor of Our Lady of Hungary Parish in South Bend for 50 years, Msgr. Sabo had known of the cardinal and his work in Hungary for years and met him in person during the Eucharistic Congress of 1938. For many years Msgr. Sabo sent Mass intentions and stipends offered by Our Lady of Hungary parishioners to Budapest to support the work of the oppressed Church in Hungary. 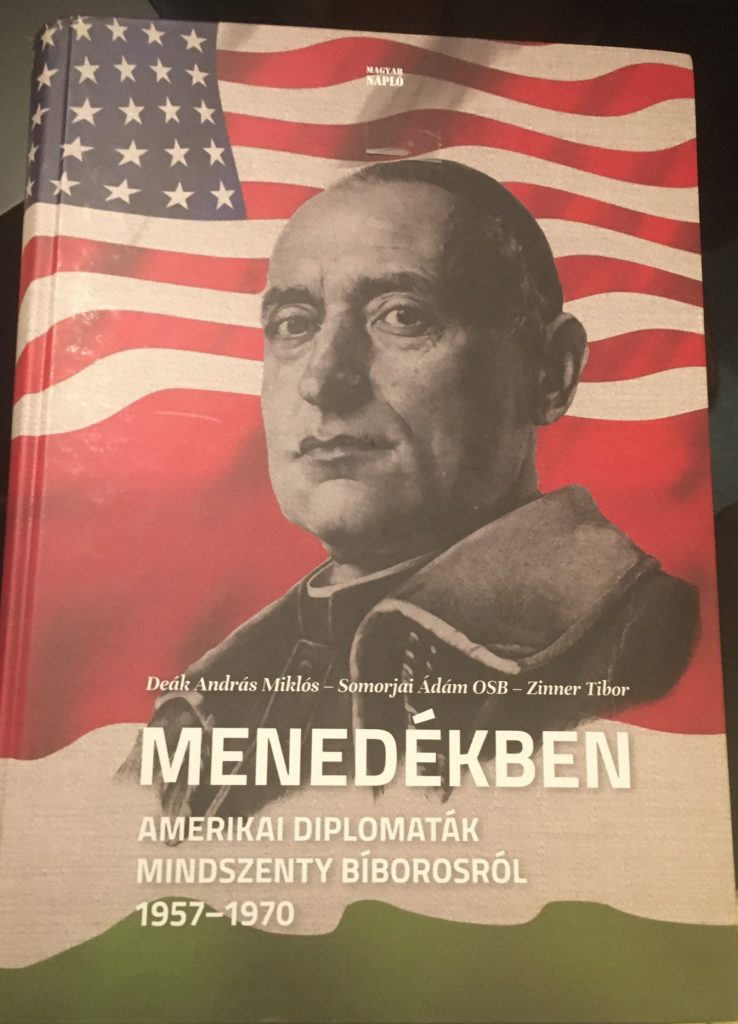 Jodi Marlin
A new account of the 15 years Venerable Cardinal Joseph Mindszenty spent in refuge at the U.S. Embassy in Hungary was recently published in Hungarian. The cardinal was declared venerable by Pope Francis in 2019 for his heroic virtue, having led the people of his country in faith and unremitting resistance to the totalitarian ideologies of Nazism and communism during the darkest decades of modern times,” as Patrick Flood, chief of the consular section and liason to the cardinal, wrote earlier this year.

‘An authentic light in the darkness’

Efforts to bring Cardinal Mindszenty’s prolonged isolation to an end included correspondence and pleas to several U.S. presidents and popes, including Pope Paul VI. Finally, in 1971, 15 years after he first sought refuge in the embassy, Mindszenty was allowed to leave the country under an agreement between Hungarian authorities and the Vatican.

He went to Rome before settling in Vienna, where he died in 1975. After Hungary’s Supreme Court declared him innocent of the charges brought against him by the Soviet-influenced Hungarian government, in May 1990 Cardinal Mindszenty’s remains were returned to Hungary and reburied in the crypt of the Esztergom basilica. In 2019, he was declared venerable by Pope Francis for his “heroic virtue.”

Flood, now retired and a resident of Fort Wayne, said having the opportunity to get to know the cardinal was deeply inspiring, and that his service as liaison officer was an was an honor and a privilege.

“(His) unremitting resistance to the totalitarian ideologies of Nazism and Communism inspired the people of Hungary during the darkest decades of modern times. He was an authentic light in this darkness, a light that refused to be extinguished,” Flood wrote in an address to attendees of a 2019 conference in Budapest honoring the cardinal.

“He was one of my heroes. And I think he should be one of everybody’s heroes, because of the fact of his incredibly inspiring courage.”