Local Catholics revel in memories of personal meetings with Blessed John Paul II
The worldwide Catholic community will rejoice at the upcoming beatification of Pope John Paul II scheduled for May 1, the feast of Our Lady of Fatima, in Rome. Pope John Paul, whose global travels and genuine pastoral presence, united the faithful across the globe during his rich and fruitful 26-year papacy.

It appears to be universally agreed upon that Pope John Paul was a pope of the people, attentive to each individual he met. He was a man of great humility and devotion to his priestly vocation. Many across the Diocese of Fort Wayne-South Bend recall with gratitude and joy their own personal meetings with the devoted Holy Father. 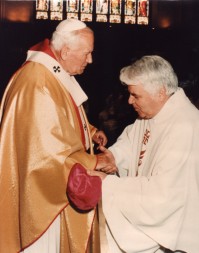 Bishop-Emeritus John M. D’Arcy recounted the privilege of meeting with the Holy Father over a dozen times throughout his own 26 years as bishop of this diocese, in several locations and settings. Bishop D’Arcy has fond memories of the five “ad limina” visits — visits between the pope and the bishops of the world — in the Vatican beginning in 1983. These visits, said Bishop D’Arcy, kept the bishops of the world “linked to the Apostles,” through their pope.

“This pope made these visits extraordinary,” said Bishop D’Arcy, who describes the day as including a 10-15 minute meeting with the pope, early morning Mass, a talk by the pope and a luncheon, where Bishop D’Arcy recalled, “We could talk about everything.”

During one of those special visits, Bishop D’Arcy recalls the pope’s warmth and sense of humor when he had the opportunity to walk beside Pope John Paul II as they exited the chapel after Mass. Bishop D’Arcy said to the Holy Father, “You have helped us be better priests and bishops,” to which the clever pope responded, “A pope should be good for something!”

Bishop D’Arcy met with Pope John Paul in Boston in 1979, at World Youth Day in Denver in 1993 and several other cities around the country and in Canada, as well. He said of the pope, “He had a great love and affection for young people. … He was joyful, holy, highly intelligent, with a strong sense of the priesthood. He was a great listener. He was devoted to his ministry and the Church.”

Bishop D’Arcy found great inspiration for his own vocation from this man who was priest first above all else. “Pope John Paul had as much influence on me as my mom and dad. … I loved him,” he said, adding, “You knew you were in the presence of a saint.”

Msgr. Bernard Galic, pastor of St. Aloysius Parish in Yoder, and director of the Vocations Office in the Diocese of Fort Wayne-South Bend, met Pope John Paul for the first time while he was in Rome on vacation. Bishop D’Arcy had written a letter requesting Msgr. Galic be permitted to celebrate Mass with the pope while in the Vatican. With the request granted Msgr. Galic found himself standing with this holy man at the altar of the Apostolic Palace. “It was exciting the first time I met him. It was awesome to be standing next to him. We’re there with the Vicar of Christ,” he said.

Msgr. Galic enjoyed the pope’s company a second time six years later while visiting Rome, this time with his own brothers. The brothers with their wives were invited along with the monsignor to meet with the pope at his summer residence, Castel Gandolfo. Though Pope John Paul’s health was in visible decline, Msgr. Galic said, “He spoke less. But holiness radiated from him. I thought, ‘I know I’m in the presence of a saint.’”

During this meeting Msgr. Galic said Pope John Paul asked him where he was from and sent blessings to all his people. “He was so very humble and unassuming,” said Msgr. Galic. The highlight of the trip occurred as Msgr. Galic was introducing his brothers to the pope when one of the brothers and his wife received a surprise blessing and congratulations from the Pope John Paul II when he learned it was their 40th wedding anniversary. 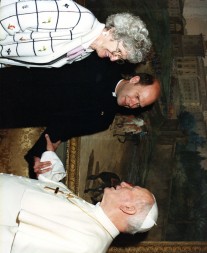 Father Daryl Rybicki, pastor of Corpus Christi Parish in South Bend, and his mother Eileen met with pope John Paul following a private Mass at the Vatican in 1994.

Another local clergy, Father Daryl Rybicki, pastor of Corpus Christi in South Bend, remains inspired by his memories of meetings with the humble Holy Father. Father Rybicki with his mother, Eileen, then 72, traveled through Poland and Rome with a group from their area in the fall of 1994. Bishop D’Arcy had written a request letter to the Vatican for Father Rybicki to concelebrate Mass with the pope. Though Pope John Paul was scheduled to be traveling, said Father Rybicki, the trip was canceled at the last minute. So the next morning Father Rybicki and his mother, along with just a few of Pope John Paul’s household staff, entered the chapel at Castel Gandolfo.

Father Rybicki said, “It was remarkable. It was quite the honor and privilege to be standing next to him (the pope) at the altar. The experience is emblazoned in my memory.” As he stood next to the pope, Father Rybicki realized that as they celebrated Mass they shared in the same ministry, the same priesthood. “I got a real sense of saying ‘We’re all in this together.’ It was a real revelation as to the continuity of the Church. Pope John Paul was first and foremost a priest. That’s what he identified with.”

Following the Mass, Father Rybicki and his mother were escorted to the reception room where they spent a good deal of personal time speaking with the pope, due to his now clear schedule. “It was a pleasant visit and exceptional because we were the only guests there,” said Father Rybicki.

A few years later, Father Rybicki was privileged once again to concelebrate Mass in Rome, this time with nearly 40 priests and Pope John Paul II in the Vatican garden, after which the pope visited personally with each priest and then processed through the crowd.

Mike and Dee Dee Dahm, parishioners of St. Jude, toured Italy in 1999 for their 35th wedding anniversary. The couple was invited, in response to a letter of request from Bishop D’Arcy, to attend an audience with Pope John Paul along with the multitude at St. Peter’s Square. “We were on a platform at St. Peter’s behind the bishops and cardinals,” recalled Dee Dee.

Following the audience they arrived at their hotel in search of the invitation to attend the morning Mass in the papal chapel. But, said Dee Dee, “there was no letter.” So the couple spoke with several in authority in hopes of securing a seat at the Mass. After several hours of roaming the streets and praying the rosary, the Dahms were told room would be made for them. “It was a select group. There were 30 seats only,” said Dee Dee, who added, “By the grace of God.”

Following the Mass that had the couple entranced with the pope’s “prayerfulness and humility,” the Dahms were escorted into the reception room to meet the pontiff. Upon entrance, Dee Dee reported, “The pope went through the whole line and said, ‘I pray for you and your families.’ He radiated holiness and peace and was there for everybody.” As he neared her, Dee Dee wondered what to say and recalled thinking, “I wanted to give him a big hug. Because that’s the feeling you get from him. He was like fatherly and grandfatherly to me.”

Dee Dee recalled that at the end of the receiving line stood a family with a child with Down syndrome. There the pope paused a bit longer and spoke with the child. “He reached out to those with disabilities and was loving and kind to them,” said Dee Dee.

Perhaps Dee Dee speaks for all who had the privilege of meeting personally with Pope John Paul II when she said, “It was one of the biggest thrills of my life. I just wanted the opportunity to put my arms around him.”