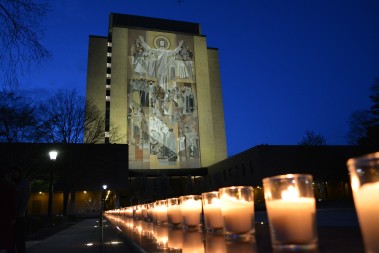 A prayer service and candlelit vigil was held on campus of the University of Notre Dame on April 22, providing the opportunity for students to share testimonies and unite in solidarity with the heroic victims of the Armenian genocide.

NOTRE DAME — With heartfelt sorrow, tempered by the hope of new life in the Resurrection and trust in God’s loving mercy, members of the University of Notre Dame family gathered throughout campus recently to recall the 1.5 million lives lost in the Armenian genocide 100 years ago.

Beginning on April 24, 1915, and lasting through 1923, the Ottoman Turkish government acted to ethnically cleanse its territory of the indigenous Armenian population, killing two thirds of the Armenians living within its borders and destroying hundreds of Armenian churches, monasteries, schools and cultural centers in the process.

During his recent Mass on the feast of Divine Mercy, Pope Francis welcomed the president, patriarchs and bishops of Armenia, passionately speaking out against this terrible violence. “Dear Armenian Christians, today, with hearts filled with pain, but at the same time with great hope in the risen Lord, we recall the centenary of that tragic event, that immense and senseless slaughter whose cruelty your forebears had to endure. It is necessary, and indeed a duty, to honor their memory; for whenever memory fades, it means that evil allows wounds to fester. Concealing or denying evil is like allowing a wound to keep bleeding without bandaging it!”

Throughout the third week of April, Notre Dame students, faculty and staff chose to honor this memory through several events commemorating the lives of those who suffered so greatly 100 years ago. The tribute began with a showing of the film “The Lark Farm,” about an aristocratic Armenian family unexpectedly swept into the ravages of genocide.

The following day, Theology Professor Maxwell Johnson spoke on the importance of martyrdom in both the early Church and today, specifically referring to those killed in the Armenian genocide. He emphasized that “those who have given their lives for Christ participate in an inherently Eucharistic ritual, offering themselves as sacrifice in place of the bread and cup; becoming transformed into Him through their deaths.”

He also shared the decision of the synod of bishops of the Armenian Apostolic Church, which for the first time in hundreds of years, on April 23, 2015, officially added saints to their register of holy men and women, canonizing the martyrs who gave their lives for their faith and their homeland during the Armenian genocide. While no specific names were mentioned nor were a fixed number of martyrs defined, the Armenian Church acknowledged that “even without knowing the names or precise circumstances of each one, God knows who they are, and for us that is sufficient.” This act of canonization allows these martyrs to finally officially be recognized as members of the Church triumphant and celebrated within the Divine Liturgy. It serves as a reminder for the faithful to perpetuate the Christian witness of the Armenian people to inspire their own mission and evangelism in this world.

In remembrance, a prayer service and candlelit vigil was held on campus on April 22, providing the opportunity for students to share testimonies and unite in solidarity with these heroic victims. Graduate students and organizers of the event, Shant Mahserejian, Alan Grigorian and Armenian Deacon Jesse Arlen each spoke about how the genocide touched their lives. These brave men revealed how their respective great-grandparents were killed, orphaned or forced into hiding during the genocide. Each affirmed the importance of keeping their heritage alive, working for peace, and leading other young men and women to become the generation that ends the cycle of genocide.

Further emphasizing the need for systematic change towards peace, Mahserejian stated, “Upon his invasion of Poland, Hitler was confronted and asked, ‘What makes you think you can get away with this?’ His response was simple, ‘Whom, after all, remembers the annihilation of the Armenians?’ Throughout history you see repeated cycles of ethnic cleansing, including the Holocaust, Rwanda, Darfur and many, many others throughout the last century. Current activities taking place in the Middle East at the hands of ISIS are included as part of this. It will be through education, sharing of stories, taking political action and upholding a commitment to justice, which will ultimately allow us to overcome these evil powers.”

With hopeful remembrance, Grigorian also shared, “Even while being persecuted, the Armenians never abandoned their belief in their faith and their culture. In the Armenian community there is a saying, especially in regards to genocide, which is ‘you may cut my branches and burn my leaves, but you will never touch my roots.’”

Following these passionate testimonies, those in attendance processed from Alumni Hall Chapel to the reflecting pool outside Hesburgh Library. Led by 15 students, in memory of the 100 years, each took 1,000 steps, combining to signify the 1.5 million lives lost in the genocide. Each placed a candle of remembrance in front of the library, praying together for those who have been lost, but shall soon be honored throughout the Church.

The weeklong tribute culminated with a screening on April 27 of the film, “1915: The Movie,” about a present day theatre director seeking to bring the memory of this forgotten genocide back to life.

The Armenian students and professors of Notre Dame encourage all people of conscience to take a moment to remember the victims of this genocide, as well as all those around the world who have or presently suffer from crimes against humanity. Those interested in learning more about the Armenian genocide or taking action in response are encouraged to visit www.armenian-genocide.org and www.marchtojustice.org.