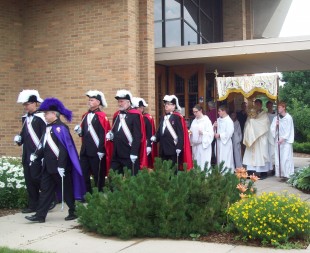 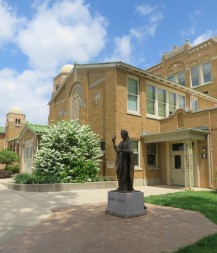 A bronze statue of St. Jude was created by parishioner and local artist Frank Bougher. The statue was dedicated at the Fort Wayne parish on the feast of St. Jude, Oct. 28, 2014.

From 1925 to 1927, Catholic residents of Lakeside and Kensington Addition in Fort Wayne began showing a strong interest in seeing a new parish established. These residents felt that the five miles between them and the Cathedral of the Immaculate Conception or St. Mary Mother of God Church, downtown, made a new church and parochial school necessary.

In the spring of 1926, Bishop John Francis Noll authorized the formation of this new parish. On May 7, 1926, the diocese purchased five acres of land bounded by State Boulevard, Randallia Drive, Forest Avenue and Pemberton Drive. This acreage constitutes the present St. Jude Parish Square.

The building project was entrusted to Father Thomas M. Conroy, rector of the cathedral. On his recommendation, the new parish was dedicated to St. Jude the Apostle, not to be confused with Judas Iscariot. Bishop Noll dedicated the school and a chapel on March 3, 1929. The next day, the Sisters of Providence opened the doors of the new school to 105 children in four grades.

There was much development over the next month. Bishop Noll formally established the parish as St. Jude Church, appointing Father John A. Dapp as its first pastor. Father Dapp then celebrated the first Mass in the chapel. By August of 1929, ground had been broken for a temporary rectory, at a cost of $13,500, on the northwest corner of Pemberton and Forest Avenue. School opened that September with eight grades and 293 pupils. Father Dapp moved into the rectory the next year.

The parish received the gift of a bell from the John Dehner family, which was hung in the south tower of the school and rung for the first time for the Angelus on Christmas Eve, 1933.

By 1935 the parish had grown rapidly. School enrollment had reached 345 children, and it quickly became obvious that the chapel, which seated only 260 people, was too small. Plans commenced to build a church adjoining the east side of the school, which Bishop Noll dedicated on Thanksgiving Day in 1935. 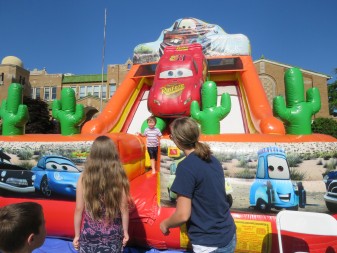 Eaglemania, a celebration of the St. Jude identity, will take place on June 2 this year.

In November 1946, Father Charles F. Girardot was appointed pastor of St. Jude, succeeding then-Msgr. Dapp. In November 1948, the sisters moved in a residence on Kensington Boulevard to create more classrooms in the school.

When school opened on Sept. 4, 1957, the enrollment had reached 920. The staff consisted of 13 sisters and six lay teachers. Enrollment continued to be high, peaking at 964 children for the 1963-64 school year, guided by a staff of 14 sisters and nine lay teachers.

On Sept. 27, 1964, plans were announced to build a new church. Six months later, the liturgical reforms of the Second Vatican Council were implemented at St. Jude: a new altar, made of Minnesota Red Granite, now occupies a prominent position in front of the old altar. The pews are arranged with the farthest pew only 60 feet away from the sanctuary, allowing the entire assembly to be gathered around the altar.

On Feb. 14, 1970, a Saturday night vigil Mass was celebrated for the first time in the renovated space, and on Palm Sunday, March 22, 1970, the Mass of Pope Paul VI — or the Roman Rite Mass, as it is known today — was used for the first time. On July 1, 1970, now-Msgr. Girardot retired and was succeeded by Msgr. J. William Lester as pastor. Msgr. Girardot continued to live in the neighborhood until his death in 1974.

In August 1973, the Sisters of Providence, who had served St. Jude for 44 years, were replaced by the Sisters of Notre Dame, Toledo, Ohio. In 1978 Father Donald Isenbarger succeeded Msgr. Lester as pastor, until 1980, when Father John Pfister succeeded him.

The Feast of Corpus Christi and the Perpetual Adoration Chapel are an important part of St. Jude Parish life.

On Oct. 30, 1984, St. Jude Parish opened a Perpetual Adoration Chapel in the former convent chapel. The Adoration Chapel is open 24 hours a day, and adorers are assigned to time slots day and night. It is a center of devotion for Fort Wayne Catholics. Since that date, there have been nearly a million hours of prayer said in the adoration chapel.

In July 1988, Father William Schooler was appointed the sixth pastor of St. Jude. Father Schooler introduced stewardship as a way of life to the parish in April 1989, with sacrificial giving — the giving of the first portion back to God in gratitude for what he has so generously given to his children.

In July 2001, Father Thomas R. Shoemaker was appointed the seventh pastor. In April 2004, the parish began a celebration of its 75th anniversary with a Mass and a May Crowning procession. In addition, a parish picnic was celebrated in August. The celebration concluded with a parish mission in October that featured speakers from among the priests and sisters who had been a part of the parish history. A nine-foot concert grand piano was donated to the parish during the jubilee year.

According to Heather Cisz, who is responsible for communications and stewardship at the parish, “We have many families that have their third or fourth generation as parishioners and going to our school. Many families have moved into the neighborhood just to be close to the parish. There is a real feeling of community and of people pulling together here. Our pastor, Father Jacob Runyon, was baptized at St. Jude as an infant and our principal, Mike Obergfell, has been a parishioner his whole life, went to our school and is now the principal.”

Father Runyon was assigned to St. Jude on Aug.1, 2013, as its eighth pastor, succeeding Father Shoemaker, who is currently pastor of St. Charles Borromeo Parish.