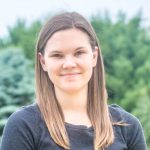 Queen of Peace, a welcoming family of faith

Queen of Peace Parish, Mishawaka, was established in 1957 by Bishop Pursley. Father Milford Bell, its first pastor, celebrated the first parish Mass at Twin Branch School for 40 families. Sixty years later, the Queen of Peace Church continues to serve Catholics in eastern St. Joseph County and is now the home parish of approximately 900 families. More than a dozen of its members have been a part of the parish since its beginning. 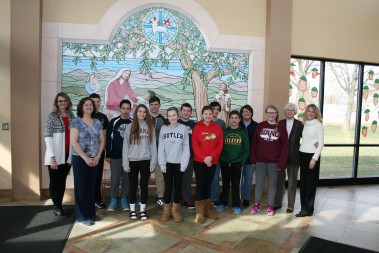 The Queen of Peach eighth grade religious education class is pictured in front of a school mural painted by parishioner and artist Charlie O’Neil.

The school opened in 1958, and the children were taught by the Franciscan Sisters of Mishawaka. It started as just a few classrooms and doubled as a worship area for parishioners. As attendance increased, mobile classrooms were added: In 1970 the parish joyously dedicated a new church building and opened a gymnasium. Unfortunately, that same year the sisters found themselves no longer able to provide staffing for the school and it was forced to shut down. 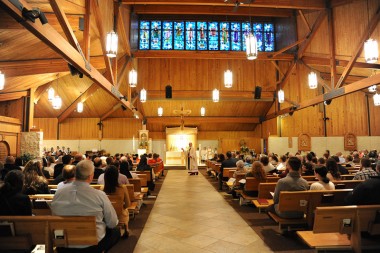 A confirmation Mass takes place at Queen of Peace Church, Mishawaka, in 2016.

God, however, had plans for the parish. In 1988, Father Elden J. Miller became the fourth pastor. He had a great passion for education and dreamed of making Catholic education free for everyone. Although he was not able to achieve that grand goal, Father Miller was successful in reopening the school in 1998. The first year a preschool alone was offered, but grades K-2 were added in 1999 and after that, one grade was added per year. When he passed away in 2008 Miller bequeathed half of his estate to the parish, primarily to be used for student scholarships.

“We have never forgotten our past,” said longtime parishioner and current parish administrator Laurie Haverty as she recalled Father Miller’s ministry. The closing of the school was difficult, but it is something that parishioners will always remember. A great effort has been made, therefore, to continue Father Miller’s vision and ensure that the school continues to grow. 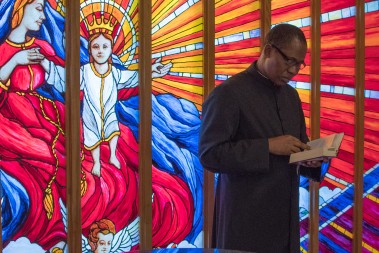 Today, Queen of Peace School is “a place where Christ is loved, excellence is expected, character counts, and traditions thrive, as its website says.” It has grown to include pre-K through eighth grade and currently has about 250 students enrolled. In 2015 it was named a Four Star school by the Indiana Department of Education, meaning it was ranked in the 25th percentile of schools in two ISTEP-based categories and rated an “A” in Indiana’s accountability system.

Principal Jill Patrick helps students achieve both academic and spiritual excellence by promoting technology in classrooms. Queen of Peace School is a Google school and is hoping to implement a One-to-One learning environment with Chromebooks in the upcoming year, which will include students in grades three to eight each being issued a Chromebook device for their school-related use. In addition to keeping learning current with 21st century technologies, Patrick believes the curriculum shift will “open a lot of different doors for students and connect them to the world outside of Queen of Peace.”

The campus has received many upgrades and a large addition since its beginning. Some upgrades include Our Lady’s Garden and grotto, an outdoor education area and an aquaponics building.

One of the areas that stands out to visitors is the recreational area named Father’s Fields. The space includes a basketball court, a baseball diamond and a new playground off the parking lot. Aside from being a place for school children to play and grow in friendship, Father’s Fields also serves as a reminder of the past to students, parishioners, staff and visitors. It is a space dedicated to all the pastors who have served at Queen of Peace, each of whom left their own mark on the faith community.

Many of the renovation and building projects undertaken by the parish, and even the building of the church and gym, were done by incurring little to no debt. Haverty believes the donor support and parishioner volunteerism is so great because of the familial nature of Queen of Peace. “People are consistent in their support of the parish because they feel like a part of the family. We are all family.”

It is no surprise that people connect very easily and feel welcomed at Queen of Peace parish, because there is something offered for everyone. From youth groups to Vacation Bible School, garden club to choir, there are opportunities offered for nearly every passion as well as every age group.

“My hope for every member of our parish family and everyone who finds themselves at Queen of Peace Church and school is that they will receive and enjoy the same love and welcome that I have received, or even more. No parishioner should ever feel alone in this family of faith,” said current pastor Father John Eze.

Father Eze first became familiar with Queen of Peace in 2013 while he was on vacation. After expressing an interest in serving here, he was initially asked to assist the parish during former pastor Father Daniel Scheidt’s recovery from surgery. Queen of Peace quickly became Father Eze’s new home.

While he likes to credit the welcoming nature of the community for the familial atmosphere at Queen of Peace, parishioners will tell you that it is really because of Father Eze’s genuineness and approachability. At daily Mass, he encourages people to bring their friends and often jokingly encourages this practice by promising shorter homilies. He has a passion for talking with members of the Queen of Peace family and is thus very active among parish groups. Additionally, he holds special office hours where anyone can drop in and have a discussion about anything that is on their mind.

“The great things that happen are because of Jesus,” reflected Father Eze. Each morning when he exposes the Eucharist for daily adoration he says, “Lord, take over.” This devotion to the Eucharist seems to have inspired parishioners to increase prayer in their own lives through daily adoration, Mass and the parish’s monthly novena. A group of students has also begun Adoration Club to pray before the Blessed Sacrament together once a week.

Some events that the parish is looking forward to in the upcoming months include summer religious education classes, Vacation Bible School and the annual parish PeaceFest celebration.