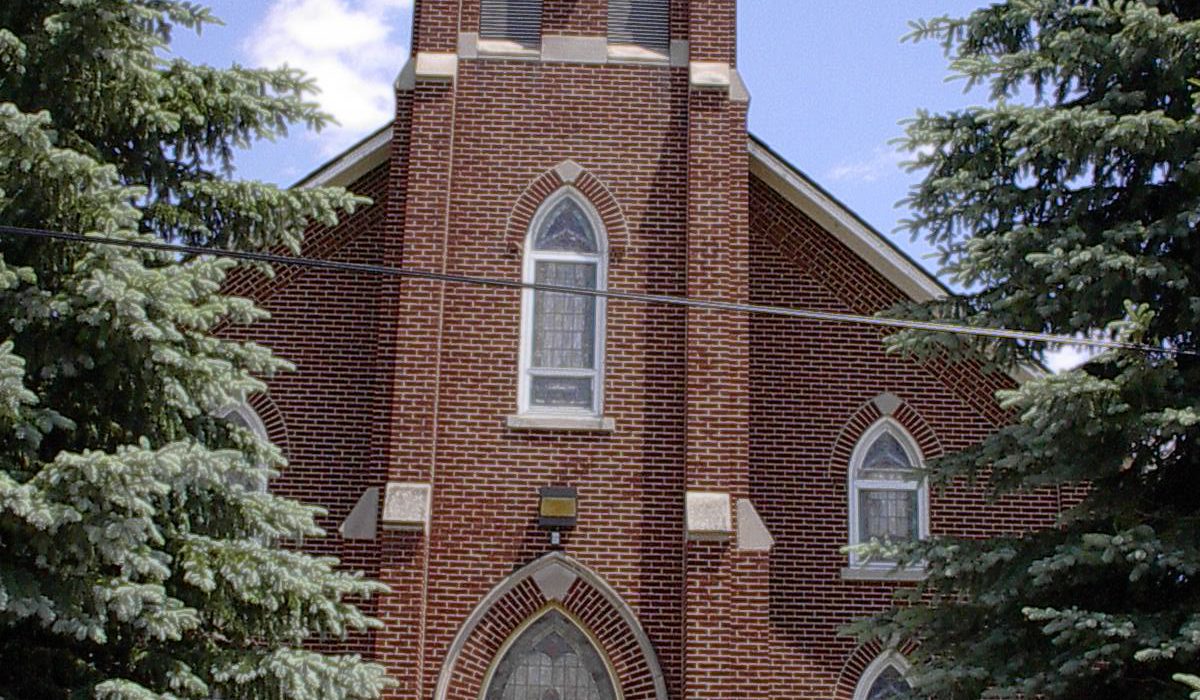 Other parishes in Noble County include: 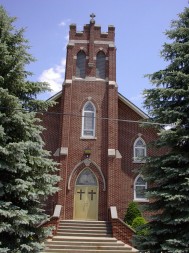 EGE — The solid and imposing Immaculate Conception Catholic Church located at the heart of the tiny settlement of Ege in Noble County stands in silent testimony to the deeply rooted faith of its parishioners.

Established in 1853 on land purchased and cleared by French immigrant Gabriel Girardot, the parish has long been the physical and spiritual center of Ege. Girardot had pledged to God that he would build a church in the wilderness if his efforts to bring his family from France to America were successful. And so the original church, its altar, pews and furnishings were built by Girardot himself on the two-acre plot of land he donated.

The land originally known as Girard settlement became home to many Catholics of Polish heritage who settled there to work on the railroad. Then in 1878 when Father Francis Xavier Ege came to serve as church pastor, he was so beloved by his parishioners that Girard settlement was renamed Ege in his honor, and Immaculate Conception Church remains the center of activities there today.

The church has fallen victim to three fires over its history. The first, in 1886, totally destroyed the original church, but it was quickly rebuilt along with a school, convent and rectory. In 1923, a second fire claimed the church while Mass was being offered and parishioners were able to save the statues, the organ and some of the pews. It was again rebuilt, this time with an additional lower level parish hall. Most recently, in 1989, an electrical fire destroyed the main altar and sanctuary floor but spared the building’s structure.

Later that same year the restored altar and church were dedicated and consecrated by the late Bishop John M. D’Arcy.

Parish administrator since 1995 is Father Danney Pinto, who is “on loan” from his home parish in Sri Lanka. He is busy pastoring at Ege and also at its sister parish, St. John Bosco in Churubusco, where he is in residence. He has called Immaculate Conception “a beautiful church” and one well-beloved by its people.

Beth Konger is head of the music ministry and church organist of 34 years’ standing. She notes that the parish appears to be growing, and a visiting priest recently commented on the many young families filling its pews. She enjoys the close-knit community of a smaller church, she says.

A religious education program directed for more than 35 years by Judy Egolf currently serves 27 families, with 53 children enrolled in preschool through eighth grade classes. They meet after the 8:30 a.m. Mass each Sunday from early September through April. This year four students received the Sacrament of Confirmation and eight received their First Holy Communion in early May. Five of her 13 teachers are older students themselves. “I’m thrilled to have these high school students giving back to our parish by helping educate the children,” she says.

The 2015-2016 religious education year’s theme, inspired by Pope Francis, has been Caring for God’s Creation, explains Egolf. And projects have included a Right to Life baby shower, a Thanksgiving food drive for the needy, Christmas stockings for veterans, a “Caring like Jesus” food pantry collection and Operation Rice Bowl, which netted $285. “My goal for our program is to get the children involved in helping others,” she points out.

Another important ministry at Immaculate Conception is headed up by John Konger and his son Ryan, who are co-sextons of the parish cemetery where the church was originally located. Its earliest founding member Gabriel Girardot and his wife Caroline Henriot have been interred there since the early 1900s, as well as scores of long-time parishioners. John keeps the cemetery’s records and notes that about six burials a year occur there now, and with the recent acquisition of more land, there’s “plenty of space.” The job of overall maintenance is made easier by the assistance of a good committee, he says. Like many others in the congregation, he is a life-long member of the parish and values the feeling of community in the small church. “It’s my home parish,” he notes fondly.

Another organization with deep roots in the parish is the men’s Holy Name Society, according to Garry Polakovic. With a membership of about 50 under president Kenny Steith, the men take care of the four buildings and grounds and do anything that needs to be done, he says.

Holy Name members are currently overseeing installation of a new slate roof on the former rectory and discussing replacement of carpeting in the church. They are busy planning a whole hog raffle, as well, which may become an annual fundraiser for the parish. He adds, “Though the parish is small, “it doesn’t seem small because everyone’s involved.”

Tina Macy, president of the ladies’ Rosary Society would agree. Though there is a core group of active members in the organization, all the women in the church are expected to play a role. Immaculate Conception Church has “a busy Rosary Society … in our parish, we’re all a member,” she says.

Each year on the first Sunday after Labor Day, the parish hosts a chicken dinner which typically draws more than 1,000 for a fun-filled day of food, with a country store and games for the entire family. The Society prepares and serves all the meals, which include fried chicken, potatoes with homemade noodles and gravy and home baked pies.

The fundraiser dates back to the early 1900s when it also included the raffle of an automobile. Plans are already underway for this year’s event, she says. “What people like about our church,” Macy adds, is that “everybody knows everybody.”

Father Danney echoes that sentiment. Parishioners at Immaculate Conception are “a good group of people” who work well together to support the needs of the church and its pastor, he says. And its active ministries make it a vibrant and welcoming place of worship, drawing the faithful to Ege.