AMMAN, Jordan (CNS) – Archbishop Pierbattista Pizzaballa, Latin patriarch of Jerusalem, reaffirmed the Catholic Church’s recognition of the official baptism site of Jesus in Jordan and said a new chapel on the opposite side of the river is purely touristic, not historic.

“It is clear from the historical, archaeological, and indeed all the points of view that the actual site of Jesus Christ’s baptism (in the Jordan River) is on the Jordanian side. Traditionally, historically and according to the Bible, it is on this side,” Archbishop Pizzaballa told Catholic News Service in an interview at the Latin Patriarchal Vicarate in the Jordanian capital.

He also spoke of the Church’s continued work with Syrian and Iraqi refugees in Jordan during the COVID-19 pandemic.

More than 25 years ago, excavations began on the East Bank of the Jordan River and uncovered the site, which includes the Old Testament Prophet Elijah’s Hill. The area is full of the ruins of ancient Roman and Byzantine churches and chapels, a monastery, hermit caves and baptism pools, destroyed by earthquakes and the river’s flooding, which through the centuries had commemorated the site of Jesus’ baptism.

St. John Paul II visited the Baptism Site in March 2000 and celebrated Mass there, while Pope Benedict XVI visited in May 2009 and blessed the foundation stones of the Latin and Greek Melkite churches. 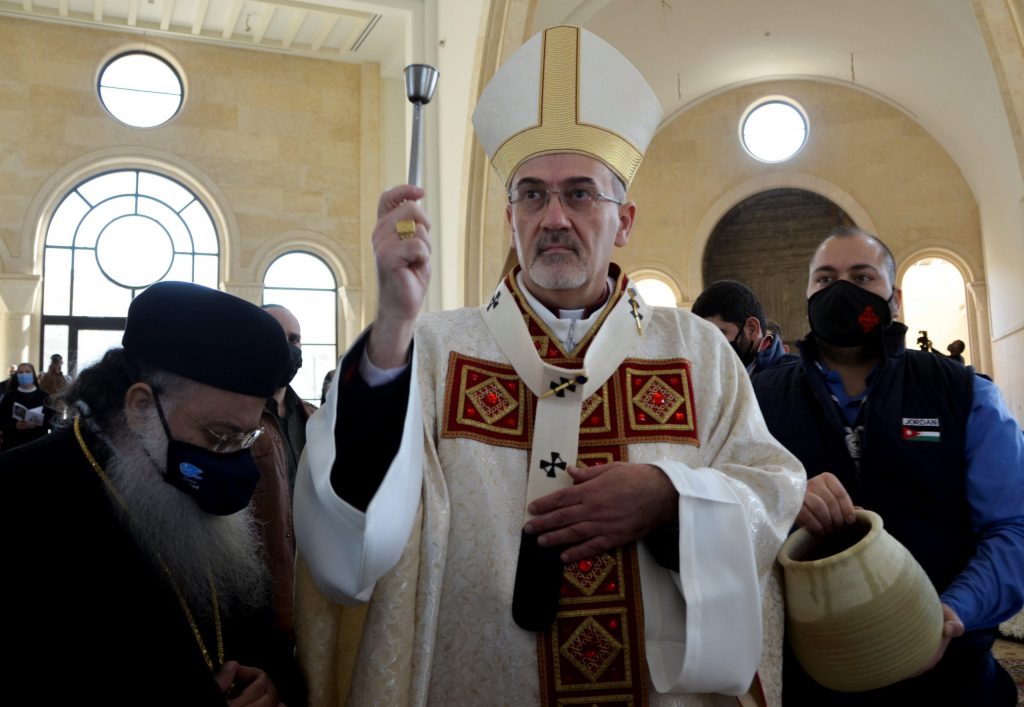 Archbishop Pierbattista Pizzaballa, Latin patriarch of Jerusalem, sprinkles holy water as he celebrates Mass at the unfinished Church of the Baptism of Christ at the site of Jesus’ baptism at Bethany Beyond the Jordan near Amman Jan. 9, 2021. Archbishop Pizzaballa is on a monthlong pastoral visit to Jordan, which is part of the Latin Patriarchate of Jerusalem. (CNS photo/Muath Freij, Reuters)

Archbishop Pizzaballa said that in May 2014, Pope Francis also prayed at the site in Jordan and placed the cornerstone for the “building of a big Catholic church and two monasteries: one for nuns, one for male religious who will run the place and receive pilgrims there who want to have a moment of prayer, retreats, a spiritual experience.”

Other Christian denominations, including the Anglicans, recognize the Jordanian site and are also constructing churches. The Greek Orthodox St. George Church and the Russian Pilgrim Residence are already present.

On the west bank of the river, “In the 1920s, during the British Mandate, the British gave to the different churches a plot of land on condition that they would build a chapel or something, because many pilgrims wanted to go to the baptism site, and they couldn’t find the place,” Archbishop Pizzaballa said.

“There are millions of pilgrims on the other side (Israel and West Bank) and they want to explore the place. Their rationale is we have millions of pilgrims who cannot go to Jordan, so we give this side. Now, after the demining of the place, they saw the touristic, and I suppose, business potential,” he added.

On Jan. 10, the feast of the Baptism of the Lord, Mass was celebrated at St. John the Baptist Chapel in Qasr al-Yahud, West Bank, for the first time since the 1967 war. The area had been heavily mined.

Jordan is one of four regions, including the eastern Mediterranean island of Cyprus, comprising the Latin Patriarchate of Jerusalem. As such, Archbishop Pizzaballa recently celebrated Mass at the unfinished church at the Baptism Site in Jordan to mark the feast of Epiphany.

“The Latin Patriarchate also has financial issues in the past, almost solved, but we can’t afford everything at the same time. We didn’t stop the Baptism Site project, but it goes slow,” said Archbishop Pizzaballa. “I hope in 2021, we can turn the page.”

Archbishop Pizzaballa is on a monthlong visit in Jordan, looking into the work of various parishes throughout the country, the ecclesiastic court and refugee work.

“Jordan is a completely different reality because there is no political conflict here. Everything in Israel/Palestine affects the conflict. But here, there is regime stability,” he said. But he added that the coronavirus pandemic has badly impacted the country’s economy and has affected the church’s ministry to Jordanians as well as to hundreds of thousands of Iraqi and Syrian refugees sheltering in the resource-poor country.

“Already before COVID-19, the economic situation was fragile. We have people from almost a year, not working because borders are, in reality, closed. There are no tourists, no pilgrims. Especially for Christian families, this is a big problem,” Archbishop Pizzaballa said.

“Most of the Christians go to Christian schools, so it’s difficult to support the schools, and the schools don’t have enough, so they cannot pay salaries.

“Then, there is the psychological effect with some fears. The elderly remain at home. It’s difficult to gather. We didn’t have a proper Easter or Christmas. Pastoral life, in reality, is suspended because we can’t perform first Communion, confirmation, marriages, and this also hasn’t helped and is not, of course, an encouragement,” he explained.

But Archbishop Pizzaballa pointed out: “There are communities or groups of families that gather to organize support for others, and not only Christians. This is nice. Sometimes when finances are reduced, we see more involvement from our different communities.

“Caritas and other Christian and Catholic institutions, including the Pontifical Mission, have been very active in helping refugees from the beginning,” Archbishop Pizzaballa said.

“When I visit various parishes and communities, there is always a school for Syrian or Iraqi refugees. There is always a group supporting Iraqis wherever they live, sometimes in very miserable conditions,” he said of the tens of thousands of Iraqi Christians sheltering in Jordan after escaping atrocities carried out by Islamic State militants against them in their homeland.

“Schools in Jordan are often Jordanians in the morning, Iraqis in the afternoon because there is not enough space for all. They have different programs. The church from the beginning has been very, very involved in refugee support,” Archbishop Pizzaballa said. Schools for younger children in Jordan are set to reopen Feb. 7, whereas older students will remain in online learning.

“In our Latin Patriarchate schools, we accept hundreds of Syrians and Iraqis free of charge because, of course, they cannot pay. But one of the main problems the refugees have is that they cannot remain for years without an education. It’s quite concerning for them.”