AWALI, Bahrain (CNS) – Traveling as a “sower of peace” to the Kingdom of Bahrain, Pope Francis further strengthened ties with the Muslim world and witnessed the joy and vitality of its minority and predominately expatriate Christian population.

His message promoting the peaceful coexistence of different cultures and ethnicities also included the wider Persian Gulf region, which is also increasingly more diverse due to growing communities of migrant workers, who constitute a significant percentage of the population.

The 85-year-old pope’s visit to Bahrain from Nov. 3-6 was his 39th international trip in nearly 10 years as pope and his 13th trip to a Muslim-majority nation, reflecting his deep commitment to interreligious dialogue and the need to work together to face today’s global challenges and moral crises.

The pope’s first stop in Awali on Nov. 3 was Sakhir Palace, home of King Hamad bin Isa Al Khalifa and the royal family. 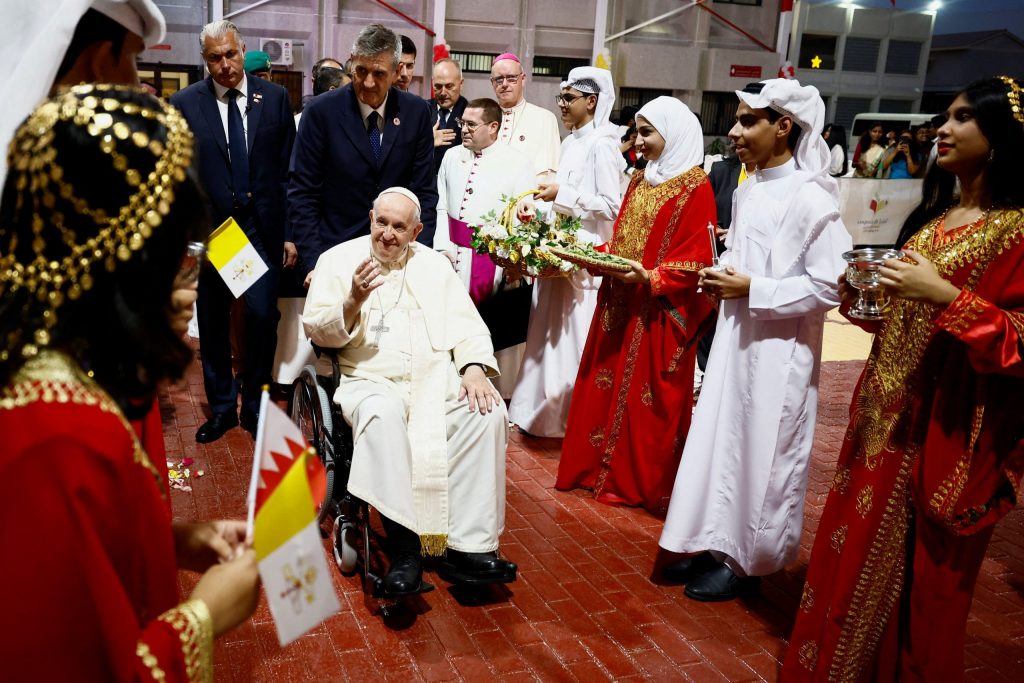 Meeting with authorities, members of the diplomatic corps, and local representatives at the palace, the pope said, “The numerous national, ethnic, and religious groups that coexist in Bahrain testify that we can and must live together in our world.”

He commended the kingdom’s efforts to promote mutual respect, tolerance, and religious freedom. However, he said more should be done to: offer equal opportunities to all groups and individuals; counter discrimination; protect immigrant workers; guarantee human rights; and abolish the death penalty.

The following day was the busiest for the pope, whose chronic knee pain had worsened, keeping him in a wheelchair when he needed to move around and seeing him stand only briefly with a cane for support.

Pope Francis helped close the Bahrain Forum for Dialogue: East and West for Human Coexistence, an event sponsored by the king, on Nov. 4 in Al-Fida’ Square at the palace.

Riding in a compact white Fiat with Vatican City plates, the pope was accompanied through the lush green oasis of the palace’s walled compound by royal guards on horseback. The pope was then invited to pour water from a metal pitcher onto the base of a large palm tree.

He told representatives of different religions and international leaders that “it is our duty to encourage and assist our human family,” especially those who are neglected by the powerful: the poor, the unborn, the elderly, the infirm, and migrants.

God wants his children to be “one family, not islands, but one great archipelago,” like Bahrain, the pope said. The world can “only advance by rowing together; if we sail alone, we go adrift.”

Later in the day in the courtyard of the palace’s mosque, the pope addressed Sheikh Ahmad el-Tayeb, grand imam of Egypt’s Al-Azhar Mosque and university, and top representatives of the Muslim Council of Elders, an international group of Islamic scholars and experts.

He encouraged those working to avoid divisions and conflicts in Muslim communities, to promote mutual respect, tolerance, and moderation, and to dispel “erroneous interpretations that, through violence, misconstrue, exploit, and do a disservice to religious belief.”

“The God of peace never brings about war, never incites hatred, never supports violence,” he said. Peace is built with “encounter, patient negotiations, and dialogue,” and it is based on justice.

Prayer and fraternity “are our weapons,” Pope Francis said, again condemning the world’s arms trade, calling it “the ‘commerce of death’ that, through ever-increasing outlays, is turning our common home into one great arsenal.”

“Unity in diversity and witness of life” was the central theme of the pope’s talk at Our Lady of Arabia Cathedral, the largest cathedral in the Persian Gulf region, for an ecumenical meeting and a prayer for peace. Many local Christians and Catholics were in attendance as well as King Al Khalifa, Orthodox Ecumenical Patriarch Bartholomew of Constantinople, and other dignitaries.

The new cathedral serves the Apostolic Vicariate of Northern Arabia, which includes Bahrain, Kuwait, Qatar, and, formally, Saudi Arabia, and was built in response to the Gulf region’s increasing Catholic population, now estimated at 2.5 million.

The pope traveled on Nov. 5 to Bahrain National Stadium to celebrate Mass for the more than 20,000 foreign residents working in Bahrain and thousands more from neighboring countries, all together representing more than 100 different nationalities.

“This very land is a living image of coexistence in diversity, and indeed an image of our world,” the pope said in his homily.

He encouraged the faithful to live as “children of the Father and build a world of brothers and sisters.” They must “learn how to love everyone, even our enemies,” and find the courage to take the risk of overcoming evil with good.

That evening, he went to Sacred Heart School, whose 1,215 students represent 29 different nationalities, cultures, languages, and religious backgrounds. A choir treated the pope to Christian songs and another group of boys and girls showcased a traditional Bahraini dance.

The pope praised their enthusiasm and openness, saying, “As I look out at you, who are not all of the same religion and are not afraid of being together, I think that without you this coexistence of differences would not be possible.”

On his last day in the kingdom, on Nov. 6, the pope prayed and spoke with bishops, priests, religious, seminarians, and pastoral workers from the Persian Gulf region at Sacred Heart Church in Manama.

Again, he pressed the need for Catholics in the region to be guardians and builders of unity, reaching out to dialogue with others, and living as brothers and sisters.