When his vocation as a husband and father intersected with his job as a sacred musician, God’s grace poured forth. Dr. J.J. Wright, DMA, a Catholic, Grammy Award-winning and Billboard chart-topping composer and musician, and choir director at the University of Notre Dame, never before had a strong devotion to Our Lady of the Immaculate Conception; he just worked under her mantle in the golden dome.

But after he and his wife, Alexandra, suffered the pain of a child who miscarried, and then a second child also miscarried at 15 weeks, Wright turned to his spiritual mother, Mary. He didn’t know what to say to his wife, and he felt kind of terrified.

He began to pray the rosary. His family said the rosary growing up, he related, but it wasn’t part of his own adult life of faith. Wright took his grief to prayer: to be in conversation with Jesus as he walked with Mary, holding her hand through the sorrowful events in Christ’s own life. From that relationship, he began to create music that reflected their intense pain of loss and growing trust in God.

Four-and-a-half years later, a new creation was born: an album and CD, “Vespers for the Immaculate Conception,” of sacred music and jazz for the feast of the Immaculate Conception, Dec. 8. It will be performed for the first time publicly at St. Patrick Cathedral, New York City. It was first released on All Saints Day, the same feast day years earlier that the Wrights had gone to the hospital after the miscarriage.

The feast of the Immaculate Conception celebrates the longstanding tradition in the Catholic Church that Mary was conceived free from original sin.

The title Immaculate Conception is describing Mary, that her blessed womb was pure from its very inception. This was the title spoken to St. Bernadette at Lourdes, France, and attached to the image of Our Lady on the miraculous medal as well as on top of the main building of Wright’s alma mater and current employer.

This album is a fruit of prayer, after losing two infants in utero — Agnes and John, they were named — and turning to Mary during that grief. Finding healing in the process, Wright now knows closeness to Mary unlike ever before. 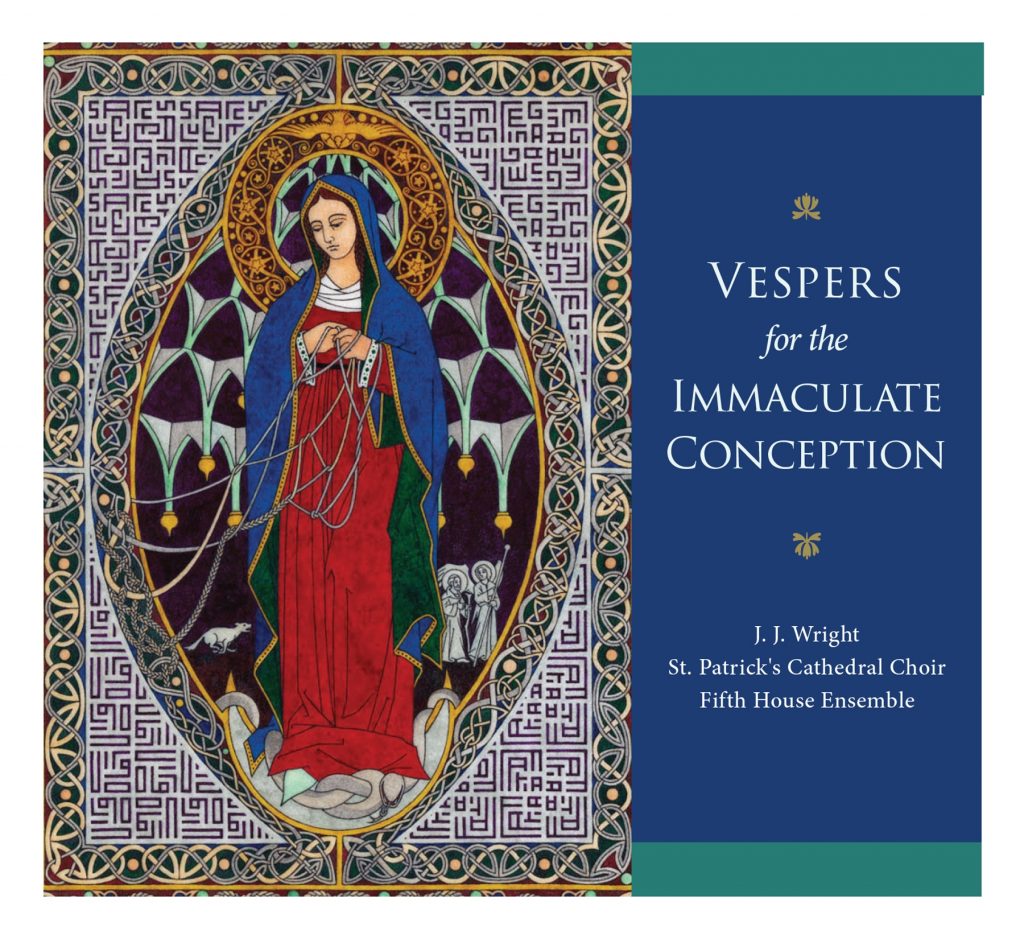 The musical piece started as an assignment when he was a doctoral student in the Sacred Music program. It was created while he and his wife were grieving their children, so with the piece he tried to answer the question, “How to incorporate new sacred music into different ways to pray?”

“Vespers is not a well known form, but it has a good tradition in sacred music as a way to present different types of music.” Wright explained. He studied baroque, Gregorian chant and jazz styles and blended them seamlessly to create a fluid, smooth new style of music in this new composition.

Following the miraculous, chronological origins of Mary, the piece is a concertized vespers service that takes the listener on a spiritual journey through ancient prayers and psalms. Its mission is to strengthen their relationship with Mary, the mother of Jesus, the Son of God.

“It’s the first chronological feast of Mary for her life on Earth”, Wright shared. “And so for people with or beginning a devotion, it’s a good place to start; it’s the ground floor of what it meant for Mary to exist on the Earth.”

The album combines a renowned choir, soloists, a string quartet and a jazz piano trio. “Vespers for the Immaculate Conception” album is anchored musically by Gregorian chant and two baroque motets (short pieces of sacred choral music) by Giacomo Carissimi and Marc-Antoine Charpentier, while weaving together scripted and uplifting music for a jazz trio. Hymns include “Salve Regina,” “Hail Mary,” “Our Father,” and “Magnificat.” 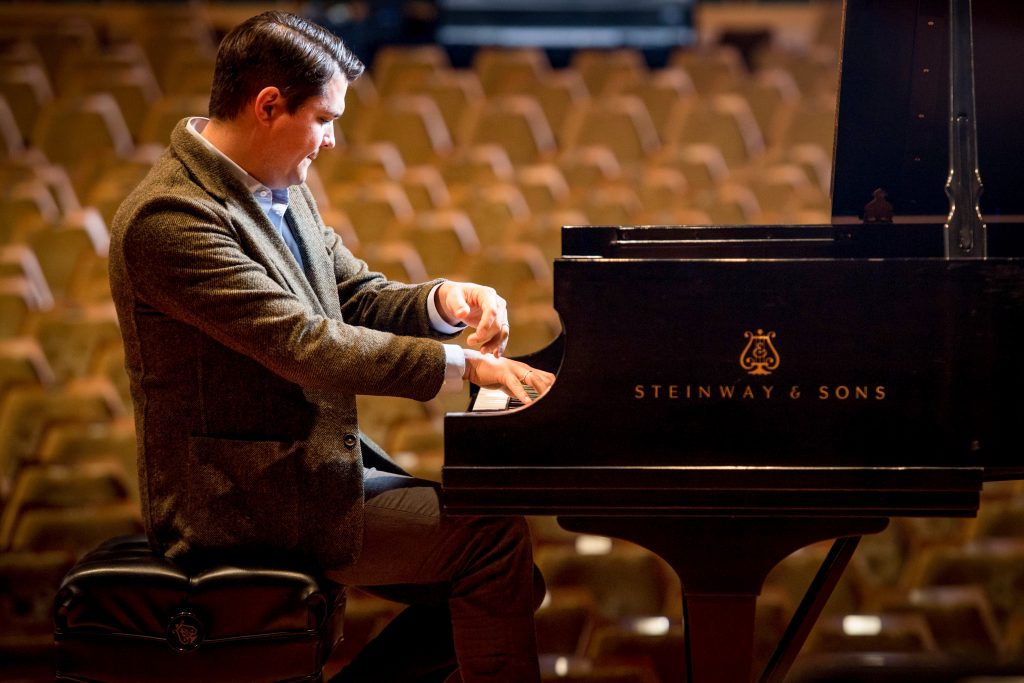 First-time listeners should expect to hear the following various parts, Wright explained: Psalm 113, exuberance and celebration and the challenges of the temptation of Eve — that is, text painting and melodies that illuminate the feelings that might have been present. The piece invites the listener to understanding how devotion to Mary came to be, to grow in devotion to Mary and thus a deeper relationship to Jesus, her Son.

“With the overall flow,” listening to sacred music “offers a certain calmness and gives us the disposition to hear God’s voice in our lives,” Wright offered.

The creation of this CD also has been a part of Wright’s vocation as a husband and father, as well as his job as a sacred musician. His family life shapes his music. When his eldest son was a baby, he would play by the grand piano as Wright practiced in New York City. His three children now sing in the Notre Dame Children’s Choir, which he helps direct.

Wright’s studio used to be on the west side of South Bend but is now in their home, where his children are “always bouncing in and out.”

“I like it here just because it’s part of our life. To our kids it’s not a mystery how I come up with stuff. They see me writing, they see me practicing. Implicitly or by instinct they can see Dad’s just another normal guy who works, like any other Dad.”

Besides the family’s regular prayer before bed, Wright finds his own prayer life informs his ability to compose and serve as a sacred music. In fact, he describes it as essential to his vocation and job.

“Like exercise, when I do it, I’m at my healthiest … My favorite way to pray is to make it the first thing in my work day, taking the time I have to pray … sometimes to say the rosary, sometimes to just have conversation with Jesus, really kind of talk … if that piece isn’t there, I can’t really do my job as a sacred musician.

“And so, when I’m composing there is the material concern, the chords, words, melody: but the first step, is asking, “What does God want me to say with this work? Where are the challenges, places where I need to grow?”

Wright admires the life and work of J. S. Bach, also a sacred musician, who worked at a university, directing choirs and raised a large family. “I spent a long time with Bach! He’s one of my favorites … He wrote so much music! And it’s so good. Endlessly inventive, he captured the spirit of prayer, and always in a different way, as well as teaching his children to play and compose.”

This integrated life, is truly a gift of grace, of Mary’s aid, bringing all people closer to her Son, Jesus, who heals. To listen to parts of the album or to purchase, go to https://www.ignatius.com/Vespers-for-the-Immaculate-Conception-P3449.aspx.

The album and CD were first released on All Saints Day, the same feast day years earlier that the Wrights had gone to the hospital after a miscarriage. The musical piece started as an assignment when he was a doctoral student in the Sacred Music program. It was created while he and his wife were grieving their children, so with the piece he tried to answer the question, “How to incorporate new sacred music into different ways to pray?”