FORT WAYNE — With the opening of the doors of Cathedral Museum in 1981, Father Phillip Widmann saw a dream — his dream — come to fruition. As the museum’s new director, Kathryn Imler intends to further Father Widmann’s lifelong mission of preserving the past and informing the future.

A history buff, as early as 1956 Father Widmann began collecting artwork, chalices, vestments and other older items that could be displayed in a diocesan venue. The earliest iteration of Cathedral Museum opened in a classroom in the old Cathedral School in Fort Wayne. Following a couple more moves, first to MacDougal Chapel on Cathedral Square and then to nearby Archbishop Noll Catholic Center, on March 12, 2019, the museum opened in the former diocesan chancery, also on Cathedral Square and next door to the Cathedral of the Immaculate Conception. 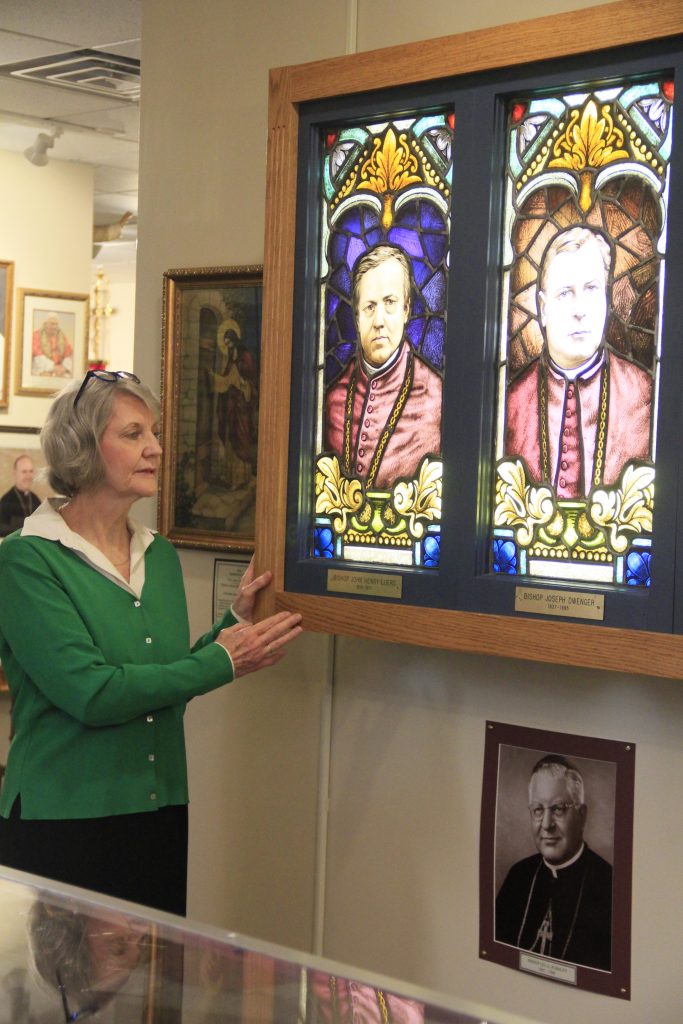 (Photos by Jodi Marlin) Imler with one of the museum’s popular displays, a series of stained-glass windows depicting past bishops of the Diocese of Fort Wayne-South Bend.

When it came time to pack and move the treasures to the current location, Father Widmann called on assistance from friends at St. Peter, an historic parish at which he had served for 17 years. Among those who responded was Imler. “I just showed up. He had asked me before if I wanted to become a docent,” but she had demurred, she said. In short order, her decision would change to the affirmative.

Father Widmann passed from this life to the heavenly kingdom March 16 of this year. In early May, Bishop Kevin C. Rhoades appointed Imler director of what has become the priest’s legacy.

She will be responsible for administrating all affairs of the museum, including receiving and cataloging donated items, maintaining public display of museum pieces, marketing and the supervision of staff and employees.

A graduate of Central Catholic High School and a lifelong Fort Wayne resident, Imler retired from 15 years of teaching English at Bishop Luers High School to develop what she calls her “creative side.” She is a local artist and published author, and has composed and recorded children’s songs. Some of those talents have already proven adaptable to caring for the museum’s treasures. 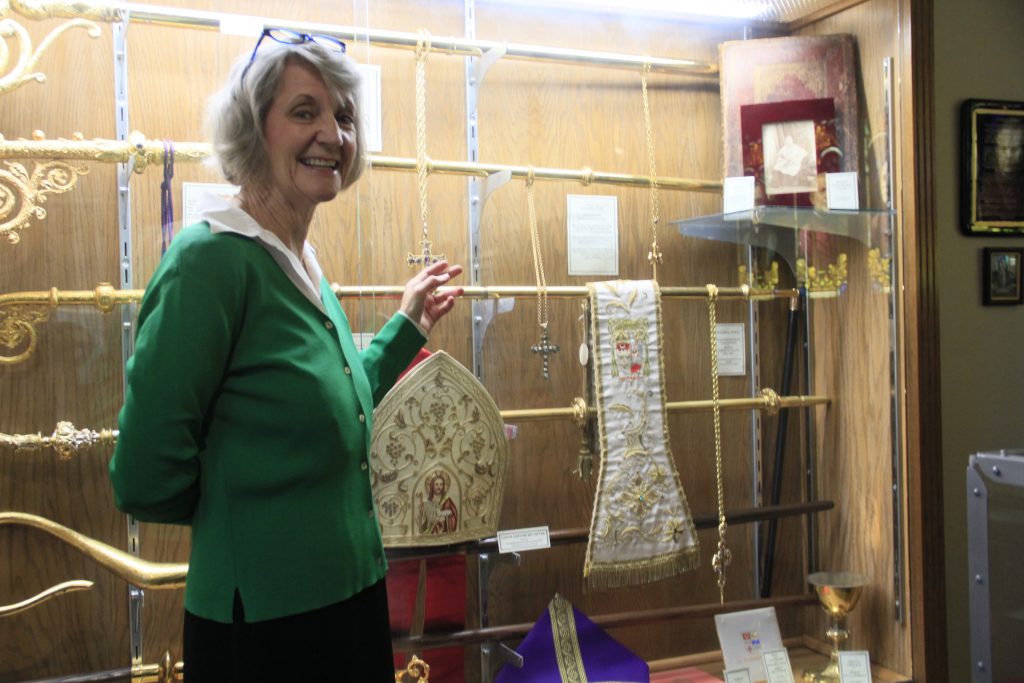 Diocesan Museum enjoys a steady stream of visitors, Imler said, including school tour groups, those visiting the cathedral or the nearby convention center, and residents who participate in local promotions such as Be a Tourist in Your Own Hometown.

“It’s a wonderful place for both Catholics and non-Catholics to come and be inspired and see all the history,” Imler said. But she sees more potential.

“There’s so much more that can be done. Parishes that aren’t represented, histories … there’s a lot of interest in that. The Crosiers – there was a seminary here — it would be nice to do something on that. I’d like to have a display about the environment and what the Church is doing to protect it.”

The museum location is in a beautiful and convenient downtown location, she feels. “And we’re free, we’re accessible – even on foot. It’s an easy museum to go through.”

Although the foot traffic is fairly consistent, there are also quiet days at the museum. Those are the days during which Imler researches artifacts like an extensive Vatican stamp collection, or work on the displays. “But the days when people are in here are just great. They like to talk and ask questions.”

Many are not Catholic but are there to learn a little about the faith, she noted. “It’s very engaging. They all have stories to tell.”

Imler considers herself blessed to have been part of the team that assisted with the museum’s move to the former chancery, because it gave her the opportunity to learn from him the background of certain items. “I just had a sense of what he (Father Widmann) wanted accomplished.”

She brings her own faith experience to the position as well.

“I grew up pre-Vatican II. The nun dolls we have from that time, those were the habits of the nuns I had in high school. I’m happy to point out things like that, that people might not realize.”

“‘It’s just a really fun job,’ I had the opportunity to say at one time to Father Widmann. He responded, ‘You know, every day is different.’” 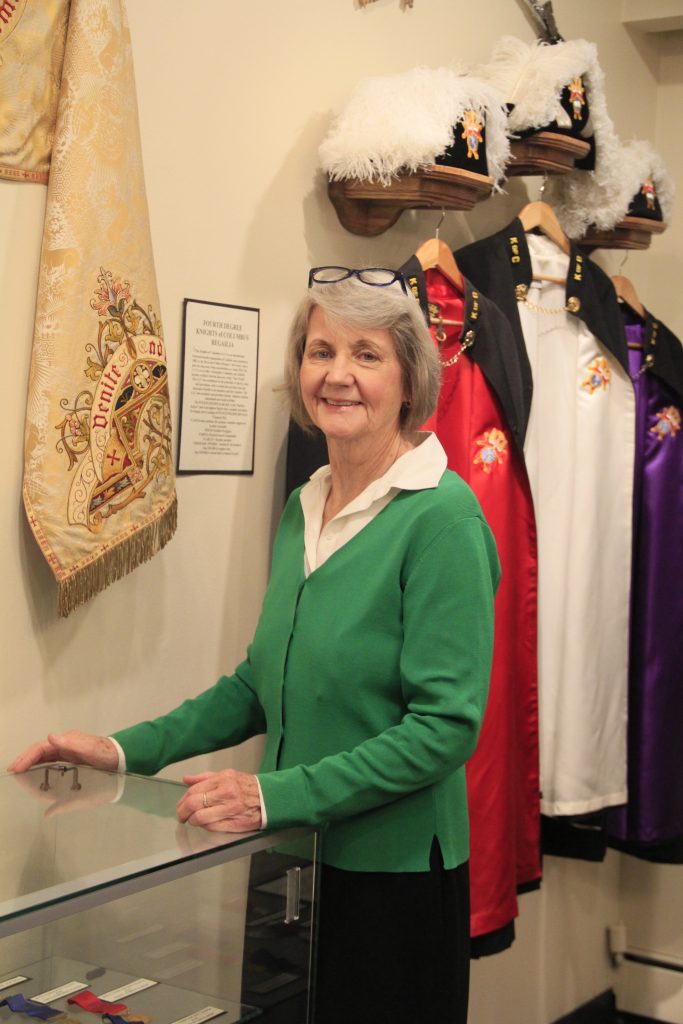 Kathryn Imler, former docent and an English teacher for 15 years, has been appointed director of the collection of diocesan treasures accumulated by the late Father Phillip Widmann. Diocesan Museum is open to the public in downtown Fort Wayne.

This year, Imler would like to finish setting up displays located in a room of the museum that isn’t yet opened to the public. The cataloging system also needs to be updated — a strength of one of the docents, she said — and an inventory completed. Imler also hopes to learn from the experiences of other Catholic museums in the region.

“Father Phil made it look easy, because he spent so much time and bothered so few people about it,” she said.

She spoke of his dedication to preserving and displaying artifacts of the past. She stated that he was in the museum “all the time. He would be here at five in the morning, tacking up vestments or working on displays.”

In addition to his love of history, she said Father Widmann had a great talent for setting up displays of religious artifacts — a much different talent than typical decorating. Imler indicated that he was a man who knew what he wanted and was driven to get things done. He also had a fantastic memory for minute details about each artifact and knew how to separate them by category, she said.

“It was such an honor and a privilege to work with him,” she said. “He had a mission and a purpose that you wanted to be a part of.”

Diocesan Museum is located at 1103 S. Calhoun St. in Fort Wayne. The hours of operation are Tuesday – Saturday 10 a.m. to 2 p.m. and by appointment. Visit https://diocesefwsb.org/diocesan-museum for more information.