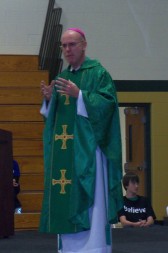 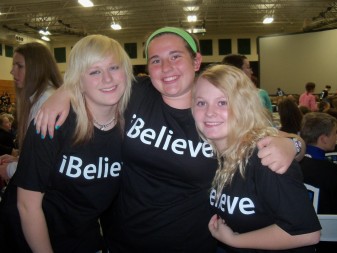 These young ladies from St. Thomas the Apostle Parish in Elkhart enjoy some fellowship while at the Confirmation rally on Saturday, Oct. 13, at Wawasee Middle School. From left are Mary Soptich, Franki Christian and Mariane Grace.

SYRACUSE — Sporting black T-shirts with the powerful phrase “iBelieve” printed in white on the front and symbols for the Year of the Faith on the back, almost 1,000 seventh and eighth graders from across the diocese spent the day preparing for their upcoming Confirmations at the diocesan rally.

The Confirmation rally was held Oct. 13 at Wawasee Middle School in Syracuse. The youth arrived at 8:30 a.m. and stayed until 5:30 p.m. The morning session included worship music by Popple and a keynote address by APeX Ministries — Brad Farmer and Gene Monterastelli. There was also a teen witness before lunch.

After lunch, students had an opportunity for 30 minutes of Eucharistic Adoration where they also learned “the best way to know Jesus is through Mary, His mother. She walked with Him, she knows Him better than anyone else. She helps us see her son is truly present in the Eucharist.”

They also prayed a decade of the rosary and were told, “The rosary is an incredible prayer we have as a Church — it’s a shortened version of the Gospels through Mary’s eyes.”

The emcee for the day, Lindsay Klinker, got the students on their feet and moving after that quiet prayerful time. Before leading them into a rousing round of Simon Says, she told the crowd, “We were face-to-face with God today — how awesome is that? The only thing more awesome is when we get to receive Him later in the Eucharist during Mass.”

After entertaining the youth with his juggling skills Brad Farmer of APeX told a personal story about his sister who was born with cerebral palsy.

“At a glance it didn’t seem like she had a lot to offer the world with her broken body —but when you looked deeper — I believe I lived with a true-life saint, even if the world didn’t see it,” he said.

When Farmer was a senior and his sister was about 11, he said he felt compelled to get up early one Sunday morning. His sister was having a hard time breathing, and a tugging at Farmer’s heart told him to tell his sister he loved her, to just be present.

Bishop Kevin C. Rhoades tells the young people that making God number one in their lives will bring them happiness. Almost 1,000 youth from 45 schools and parishes across the diocese were present at the rally.

She was rushed to the hospital and Farmer began praying what he called the “powerhouse of prayers — the rosary.”

That morning Farmer related he was focused and lost in prayer and at one point he saw his sister, but she was running smoothly and fast.

“At that moment I was in peace and found out later that was the moment she stepped into eternity,” Farmer said.

He said he told the story for two reasons — to let them know the power of prayer is real and to remind the rally participants not to judge themselves or others based on some false societal view of values, but to know, “the reality is this room is filled with powerful, incredible people — you all have a superpower mission for life.”

Monterastelli and Farmer joked and juggled and related the story of the “Juggler of Notre Dame,” who after a difficult life realized he too had a special and unique gift to offer the world.

The young people were impressed with the presenters. Mary Soptitch of St. Thomas the Apostle in Elkhart said her favorite part of the day was “the juggling guy.”

Robert Meyers, also of St. Thomas said he liked the storytelling and the food. When asked how he felt the rally would help prepare him for Confirmation, he said, “It teaches us to be good and believe in God and Jesus.”

A young lady from St. Anthony of Padua in Angola said, “There’s a lot of spirit in this and a lot of fun. You can see and understand what God is trying to tell us.” She believed the rally helped put her faith in everyday terms.

“When I walk down that aisle and hear that prayer — that beautiful ancient prayer — I like when it is sung with gusto,” Bishop Rhoades said.

During the homily Bishop Rhoades said he appreciated the question the young man in the Gospel reading asked, “What must I do to inherit eternal life?” because “everything we do should be to that purpose.”

He said even though the young man observed the Commandments, Jesus knew he was too attached to his wealth, which is why he asked him to give it all away.

“Serving God should be our number one purpose in life. There’s a very important sentence in that Gospel, ‘he went away sad’ and I bet the rest of his life he wasn’t happy because money doesn’t buy us happiness — the Lord does.”

Bishop Rhoades told the students, “Without God’s grace not one of us in this room —including me — could get to heaven. We receive the gifts of God’s grace primarily through the sacraments.”

Speaking of the words on the T-shirts, “I Believe,” the bishop said he liked it and said, “Faith is more than words — it’s also deeds. How we live, especially when it’s tough, when we’re rejected, when we’re criticized. Those saints you’ll choose were not afraid. They lived that grace and not just when it was easy, but they followed Him all the way to the cross.”

He concluded by telling the youth, “Make this your number one priority in life your faith in God. You will never go away sad like the man in the Gospel, but instead you’ll inherit everlasting life.”